It’s been a little over five years since a new phakic intraocular lens was approved by the U.S. Food and Drug Administration, and if surgeons didn’t feel comfortable with either of the approved options for treating their high myopes, they were out of luck. However, Alcon’s lens, the Cachet, is being used outside the United States and is currently in an FDA trial, so surgeons interested in a different approach to phakic IOLs may have a new device to work with in the next couple of years. In this article, surgeons familiar with the lens share their results and impressions of what may be the next phakic IOL to hit the United States market.

Cachet’s Design
The Cachet is an anterior chamber, angle-fixated lens composed of the acrylic that makes up Alcon’s AcrySof line of posterior chamber IOLs, though it has no light-blocking filter embedded in it. It’s got a 6-mm optic and two haptics and comes in powers ranging from -6 to -16.5 D. The total length of the lens can be altered when the lens is ordered, however, explains Milan, Italy, surgeon Francesco Carones. “The total length can be one of four sizes based on the patient’s white-to-white measurement,” he says. “The surgeon uses a table that will suggest the lens to use based on the relationship between the white-to-white measurement and the varying lens lengths.” Simon Holland, MD, of Vancouver, British Columbia, is one of the surgeons in a prospective trial of the lens in Canada. “We did white-to-white measurement in the trial but some centers used Visante anterior segment optical coherence tomography,” he recalls. “Both methods seem to work, but OCT probably will be shown to be better.”

Dr. Carones says the material and the lens’s design are keys to why the lens may be successful where many angle-fixated phakic lenses have failed in Europe. “In Europe, we had a lot of anterior chamber lenses but most were recalled or taken off the market because of endothelial troubles or pupil ovalization,” he explains. “However, most of these complications turned out to be related to improper sizing of the IOL or to the rigidity of the lens’s material. For the Cachet, what looks to be to its advantage over these earlier angle-supported IOLs is the high flexibility of the footplates and of the optics. They’re very forgiving if the lens is sized slightly too large. If this lens is sized too large, it’s designed not to turn the excessive size into a vault, or forward bend of the lens, but instead into a flattening. This is done through the soft footplates, which compress and spread.” 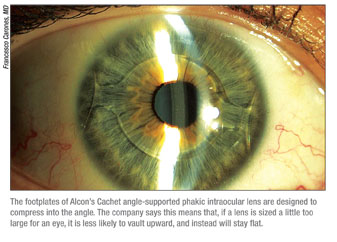 Working with the Lens
As with all refractive IOL procedures, patient selection is key to a good outcome, both in terms of safety and efficacy. “Anatomy is especially important,” says Dr. Carones. “The surgeon may want to select patients with a flat iris, not a bombe iris that protrudes to the cornea. He may also want a wide-open angle, and may not want to implant it in patients with peripheral synechiae, and may want to implant it in eyes in which the space between the endothelium and the crystalline lens is deeper than 3 mm. If a surgeon conforms to these indications, I think most of the risks of the surgery are already under control, because the surgical procedure itself is very easy.” However, not paying close attention to the viscoelastic that’s used, or using it incorrectly, can cause some problems if a surgeon isn’t careful. “You have to ensure that all viscoelastic is removed at the end of surgery,” says Dr. Holland, “or you can get an intraocular pressure rise on the first night. I see all patients four to eight hours following surgery for this reason.” Dr. Carones also mentions this. “Avoid using a high viscosity or a dispersive viscoelastic with this lens,” he says. “You may want to use one that’s somewhat viscous but which mainly has cohesive properties so it can easily be removed from the anterior chamber.” He implants the lens through a 2.5-mm clear corneal incision using the Alcon P cartridge.

Surgeons will also need to find a way to manage a patient’s astigmatism, since the lens only corrects spherical errors. “I’ll make my incision on the steep axis if possible,” avers Dr. Holland. “We implanted the lens in patients with up to 2 D of astigmatism in our study. The surgeon could also do limbal relaxing incisions or a laser refractive surgery.” Dr. Carones, who’s implanted 80 of the lenses so far, says he’ll implant the lens in any patient who’s otherwise a good candidate regardless of his level of astigmatism, because he offers laser fine-tuning postop. “I usually tell patients to wait a couple of months postop before having the laser,” he says. “This isn’t a matter of worrying that the astigmatism is changing, but more to make sure that the incision has sealed enough for the LASIK suction ring to be applied.”

In the category of safety, Dr. Holland and his co-workers studied the effect of the lens on endothelial cell counts. “Only one patient out of 120 had a significant decrease in cell count,” he says. “The mean decrease is the same as would be expected in a non-implanted eye, other than a drop in the first postop months that can be attributed to the surgery. After that, it continues at the expected rate. However, we intend to follow all patients with specular microscopy as a precaution.” In the prospective study, adverse events included four patients (steroid responders) with raised IOP that required treatment (3.3 percent), four patients with synechiae (3.3 percent), two patients with pupil ovalization (1.7 percent), two with cataract and two with dislocated lenses.

Dr. Carones says that, in the first 40 lenses he implanted, that now have more than one year of follow-up, none of the patients complain of glare and/or halo at night. He also will be reporting on the rotational stability of the lens at upcoming meetings, a factor that will be important down the road should the company decide to pursue approval for a toric version. He says that out of the 40 lenses, only one rotated by 10 degrees. It then stopped, however, so it didn’t require any intervention, says Dr. Carones. He says that, when he measured the lens and the structures of the anterior chamber around it, “the shortest distance I found between the edges of the lens and the endothelium was never less than 1.25 mm, which bodes well for the future of endothelial cell counts.”


Drs. Holland and Carones are consultants for Alcon.

A Swiss-Army Laser For Femto Cataract

LASIK Xtra: Is It for Everyone?