Penetrating keratoplasty can result in hefty amounts of astigmatism, occasionally reaching double digits in some patients, that make it even more challenging for a surgeon to achieve good post-transplant vision. The femtosecond laser can enhance the precision of post-PK astigmatic keratotomy, but 90-degree laser incisions can pose some problems of their own. Here, a surgeon explains how changing the incisions’ architecture may yield better, more stable results.


The Femtosecond Approach
The degree of astigmatism following a corneal transplant varies greatly, but it’s almost always an issue for the surgeon. In one study of 16 eyes of 16 patients who underwent refractive surgery post PK in order to treat their surgically induced astigmatism, the postop astigmatism averaged 5.23 ±2.26 D for patients undergoing surface ablation and 3.21 ±1.78 D for those undergoing LASIK.1 In a retrospective study of PK patients who underwent astigmatic keratotomy after their transplant, the average astigmatism was 7.46 ±2.7 D.2

“The main advantage of using a beveled incision is that the wound doesn’t gape,” he explains. “With post-penetrating keratoplasty astigmatism cases, there is a lot of tension in the steep meridian of the cornea. Surgeons have found that the amount of correction you can get depends on the amount of corneal astigmatism. So, the steep meridian is usually very tight, and when you make an incision, in some cases the incision can gape so severely that it’s uncomfortable for the patient, or it results in a dellen, an epithelial defect or chronic irritation. With a beveled incision, though, just like a beveled, self-sealing clear corneal cataract incision, because of the effects of intraocular pressure and the anterior/posterior compression force within the cornea, the wound doesn’t gape. There isn’t even an epithelial plug. It can even be difficult to see the wound the day after because of the lack of gaping, yet there’s plenty of correction with the beveled incision, as the sides of the wound slide against each other.

“On the anterior side of the wound, the cornea tends to become thicker,” Dr. Huang continues. “This is because it’s released from this radial tension and I think this also helps flatten that meridian.” He adds that, in addition to the creation of a beveled wound, the femtosecond laser, in general, offers the advantage of accuracy of incision placement. “Manually, it’s difficult to place the incision just inside the graft, which is the preferred position,” Dr. Huang notes. “With the laser, I place it 0.4 mm inside the graft and this has worked well. You can achieve that tight of a tolerance with it. The angular orientation of the incisions is good, and their depth is more uniform than doing it manually.”


The Technique
Dr. Huang says his beveled AK technique with the IntraLase involves first measuring the corneal thickness just inside the boundary of the corneal graft, along the meridian on which you’re going to make the incision. “I do the ultrasound pachymetry measurements along each arc, record the thinnest value and then multiply that by a certain percentage,” he explains. “For example, if I’m targeting 70 percent depth, and the minimum value I measure is 600 microns, I’ll set the laser for a 420-micron incision depth. On the IntraLase, you can program the incision by designating it an anterior side cut using the laser’s keratoplasty program. This program allows you to set a single depth, but also to vary the position of the arc and the arc length independently for the two incision arcs.” He marks the three- and nine-o’clock positions at the limbus, and under the microscope will mark just outside the graft at three and nine o’clock and six and 12 o’clock so he can see the marks when the patient is under the IntraLase and he’s performing the applanation. “I do this just to make sure the eye is straight in terms of up/down and left/right,” he says. He moves the laser cut pattern so that it’s centered within the corneal transplant, because the wound is fairly evident upon applanation, he says.

After the cut, he opens the incision under the operating microscope using a Sinskey hook. “I use the Visx laser’s operating microscope for visualization,” he adds. “It has a nice corneal ring reflex that acts like an intraoperative keratoscope. I open up the wound to the fullest extent.” 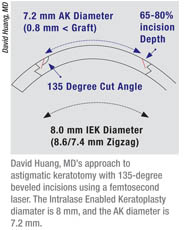 “The bevel of the incision is 135 degrees, in ‘femtosecond speak,’ ” continues Dr. Huang. “So, it’s 45 degrees from perpendicular. Basically, you make an incision where the diameter of the incision gets bigger as you go deeper. It angles down and outward.” This helps avoid the epithelial plug that is common with 90-degree incisions. “The epithelial plug is undesirable but occurs almost all the time with incisions that are 90 degrees,” says Dr. Huang. “Initially, after surgery with 90-degree incisions, there will be a slight wound gape and the epithelium will grow in. As the wound heals, surgeons have documented that the plug gets pushed out over six months, during which time the cornea will be changing as the healing process progresses. Sometimes, though, there’s a PK wound in which there’s a lot of tension and there can be a persistent gaping and a persistent epithelial plug that never goes away.”

Dr. Huang says he doesn’t have a definitive nomogram just yet.“I didn’t really have a nomogram [for the first group of patients],” he says. “I based the surgery on my experience, and made incisions that were about 70 percent deep and pairs of arcs that were between 70 and 90 degrees in arc length. The incision is dependent on the degree of astigmatism and whether or not there’s any skew or asymmetry to the bow tie astigmatism pattern on topography.” If a cornea is asymmetric, he’ll make asymmetric arcs, usually 70 degrees on one side and 90 degrees on the other, he says.

In terms of results, Dr. Huang says the amount of correction the procedure will yield increases in the early postoperative period, but is generally stable by one month. In a consecutive series of six cases on which he reported, five were stable by one month, achieving an average effect between 3 D (in the case with regression) and 13 D. The mean preop keratometric astigmatism for the group was 9.8 D, but this was reduced to 4.2 D postop, which Dr. Huang would then treat with PRK. The astigmatic outcome was stable by one month postoperatively in five of the six patients. In one patient, though, there was a lot of regression of effect between one and three months postop, to the point where most of the treatment effect was lost. He’s not entirely sure why this occurred, and chalks it up to the inherent unpredictability of post-PK eyes. “It was a young patient,” recalls Dr. Huang, “but I didn’t do anything differently. The treatment parameters were within the range of the other patients. I think it’s just that these cases are highly variable because of the differing amounts of tension and healing responses in these corneal transplants. AK is already a little variable, but with post-transplant AK, you really can’t expect to be right on in most cases. However, even though it varies widely, the procedure gives a pretty respectable amount of correction.”

Dr. Huang says that, though the procedure is relatively easy to perform, the main challenge is this variability. “We would get patients who got almost instant gratification, and others who were disappointed that they needed another procedure or still required a sizable contact lens or spectacle prescription,” he says. “However, I feel that they’re pretty happy, because going from 10 D of astigmatism down to 5 D is a big improvement, and their best-corrected acuity improved by an average of 1.5 lines. The residual astigmatism can often be corrected by PRK with the use of adjunctive mitomycin-C.”

A simulated eye composed of resins and other materials can help beginning surgeons hone their techniques. Read More

The Latest Results With the LAL

Insights from the ISRS Survey

Refractive Surgery is Good to Go