Though many surgeons have questioned whether laser vision correction was the best course of action for the high myope (greater than -10 D), U.S. members of the American Society of Cataract and Refractive Surgery appear to have decided that it probably isn’t. For the first time, a greater percentage of surgeons responding to the society’s annual survey said they prefer phakic lenses over laser vision correction for this level of correction, though the margin is small. The surgeons also weighed in on such topics as the best way to make flaps, their preferred flap thicknesses and their inclination to perform bilateral, simultaneous intraocular surgery.

The survey is administered each year by Palm Springs, Calif., surgeon David Leaming and Mobile, Ala., surgeon Richard Duffey. This year, 460 of the 3,854 surgeons (12 percent) who opened the electronic survey responded. Here are some of the highlights. 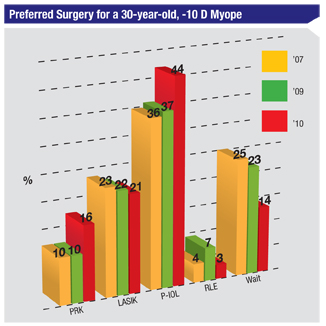 Preferred Procedures
For the 30-year-old, -10 D myope, 44 percent of the respondents said they prefer to implant a phakic lens, 21 percent choose LASIK and 16 percent like PRK (37 percent for laser vision correction when the two options are combined. (The options chosen and their percentages appear in Table 1.) Even though phakic lenses were more popular on the survey, Dr. Duffey notes it’s only by a small margin, and that LVC is still in use for these corrections. “A lot of times you may hear someone at a major meeting say from the podium during a symposium, ‘I don’t do LVC on anyone with more than 7 diopters of myopia,’ ” he says. “But from this result you can see it’s probably not true, at least within the membership of the ASCRS.”

There’s also a disparity between lens-based surgery (in this case refractive lens exchange) and LVC with regard to the +5 D hyperope, although here the difference is a large one: Sixty-one percent of the surgeons say they’d choose RLE for such a patient, vs. just 7 percent total between LASIK (6 percent) and PRK. “Hyperopia is a different animal from myopia,” avers Dr. Duffey. “Even though the FDA says you can use LVC for up to +6 D, few surgeons use it for that. The long-term predictability, the quality of the image and the patient’s night-vision performance start to tail off after about +3 or +4 D. It’s also interesting that, in the 45-year-old, +3 D patient, LASIK is preferred by far over the lens procedure [53 percent to 24 percent]. But remember that this is in a 45-year-old. If it were a 55-year-old and you asked that question, I’ll bet the numbers would be more in favor of RLE. A 45-year-old still has some ability to accommodate; putting him into an RLE procedure at that point destroys his accommodation, unless you go with a more expensive multifocal or accommodative lens.”

For the pre-cataract patient, some form of monovision accomplished with LVC—either micro- (32 percent) or regular monovision (49 percent)—was chosen by 81 percent of the respondents. Eighteen percent would use a premium intraocular lens.


Making a Flap
Even though the number of ectasia cases reported by ASCRS surgeons hasn’t grown, the preferred flap thickness still continues to drop on the survey. This year, 43 percent of the respondents prefer a 100-µm flap (compared to 35 percent in last year’s survey), and that percentage seems to be in an upward trend. Though a slightly higher percentage, 47 percent, prefer to use 120- to 130-µm flaps, Dr. Duffey notes that that percentage has been steadily dropping over the past several years. In his opinion, there are two reasons for this: “First, the femtosecond laser and the newer keratomes that are available let you make thinner flaps more predictably. Second, we’re leaving as much residual stroma as we can to minimize the risk of ectasia.”

ASCRS Surgical Volumes
Dr. Duffey jokes that ASCRS surgeons seem to be doing more LVC than non-ASCRS surgeons, because they report an unusual 27-percent increase in LVC volume from 2009 to 2010 (from 754,000 in 2009 to 960,000 procedures on the current survey), while many other sources, he says, report growth of 0 to 5 percent. “No one else in the industry is suggesting that we’ve had a 27 percent increase in LVC over the past 12 months,” he says. “Most sources argue that it’s maybe an average increase of 2 percent based on the key cards used by Visx, et cetera.
Nonetheless, the mere fact that our survey shows an uptick is good news. On our other survey, of the members of the International Society of Refractive Surgery, we saw a 9-percent increase, which is still more than what most other surveys are reporting. We’ve gone through the numbers several times to see if there’s an error but we didn’t find one.”

“Doing the survey is always instructive,” Dr. Duffey continues. “You discover a trend one year, such as an increase in volume, and then verify it over the next several years. I’ll remain a little optimistic for now, and predict a slow further uptick in laser vision correction volume, but we’ll see what those trends show us over the next two to three years.”
Show more on: REFRACTIVE SURGERY

Back to Basics: Using OVDs