Sometimes, looking at the world from a different perspective can allow a new understanding of how things work and help us solve problems in novel ways. LensAR has taken this concept to heart with its LensAR Laser System for cataract surgery, which uses a method called augmented reality to image a patient’s eye in an effort to provide all the information a surgeon needs to plan a femtosecond laser procedure. Here is a look at how the LensAR femtosecond laser system works in the cataract arena, and the possible benefits offered by a different view of the eye.

The LensAR’s augmented reality imaging system isn’t optical coherence tomography, but instead first uses a proprietary method to acquire biometric data and then uses ray tracing to create a 3-D eye model that the surgeon can see on the monitor.

“The laser has 3-D confocal illumination with the infrared camera,” says York, Pa., surgeon Denise Visco. “You get a Scheimpflug angle that produces a large depth of field within a single image, providing a high resolution and accurate imaging of ocular structures with very little image noise. If you have a dense lens, it can actually image through that accurately and locate structures such as the posterior capsule.” Since the system takes 10 images at different angles, the surgeon can rotate the 3-D eye image and see any lens tilt. Brookville, Pa., surgeon Louis Nichamin says this is important. “It compensates for lens tilt,” he says. “This is important, as lens tilt may be one of the reasons complications occurred with early use of the femtosecond laser. Clinically, I do believe we are seeing this benefit, in that I’ve not yet had an incomplete capsulorhexis or breach of the posterior capsule since I’ve begun using the device in our clinic.”

As in other femtosecond cataract procedures, the first step of the Lens­AR procedure, docking, is key to success with the subsequent stages.
“With the LensAR platform, the surgeon first places the slim suction ring on the eye, typically without the use of a speculum,” explains Dr. Nichamin. “It doesn’t create a lot of pressure but nicely holds and fixates the eye. The surgeon then uses a joystick to center the docking element over the patient’s eye and lowers it into the suction ring. The surgeon checks the monitor to verify that the system has been lowered to the appropriate level and, because it’s a water interface, there is no corneal distortion that might lead to an error in imaging or laser energy delivery. The user then locks the docking window and is ready to go.”

Dr. Visco says that though the docking system works for most patients, it needs help when faced with a patient who’s carrying some extra weight around the eyes. “If someone has a fleshy orbit, his skin might come over the edge of the small suction cup,” she says. “On these occasions, the nurse has to gently hold the skin back as you perform the docking and get this small window piece connected. The company is supposed to have a new docking system in a couple of weeks in which they changed the position of where to lock the window so that it will be easier to access and lock.”

Though Dr. Visco says the Lens­  AR system does a very good job of not creating tissue tags in the capsulotomy circle that would make it incomplete and hard to tear, she is still careful. “The only times I’ve noticed some issues with capsulotomy is if I have a particularly large patient and he’s breathing heavily,” she says. “I know his head is moving up and down while the laser’s running, so I make a mental note that there might be a tag. I believe that, even if a system is not supposed to create tags or features software that is supposed to reduce the incidence of tags to less than 1 percent, you still have to assume that every patient has a tag when you go in to operate, because it’s dangerous to assume that they don’t.”

She says that, when initially tutored on the capsulotomy step with the LensAR, she was told it would be best to put viscoelastic beneath the capsule and try to float it up. “I don’t like doing that at all, though,” she avers. “When I did that, I found I was chasing it all over the anterior chamber. Instead, I prefer to put viscoelastic on top of the capsule and then take a capsulorhexis forceps and draw the tissue toward the center from the periphery, making sure it’s completely detached. Then, when the capsule is bunched up in the center, you can just pick it up and remove it.

When it’s time to fragment the lens, the system allows the surgeon to choose a segmentation pattern. “I’ve traditionally been a phaco chopper, so my initial preference has been for a pie-cut pattern of four to eight nice, radial divisions during lens fragmentation,” explains Dr. Nichamin. “I’ve found that, in my hands, I don’t require too many division planes, but rather want discrete nuclear fragments that I can place my phaco probe on and remove. It’s clearly still a work in progress, but it’s fun; now we have a new tool with which to apply and refine our surgical techniques.” Dr. Visco says going after the nucleus during a femtosecond cataract procedure will be different from what surgeons are used to. “It’s a bizarre experience when you first do it,” she says. “This is because there’s a lot of air in the eye and light refracting from inside the lens and reflecting because of the femtosecond cuts that have been placed in it. Every surgeon will figure out what works best for him or her. The nice thing is that the patterns can be customized to whatever you want. If you’re like me and prefer to use a flip, you can use a pattern that works a little better at augmenting what you’re doing.”

For the manual portion of the surgery, surgeons offer several tips. “First, it’s important to press down on the cataract to expel gas that may have collected under or around the lens,” advises Dr. Nichamin. “Then, thorough hydrodissection is performed. I continue to employ a cortical cleaving hydrodissection technique as described by I. Howard Fine in which the tip of the cannula is placed, dry, directly beneath the anterior capsule. This promotes mobilization of the cortical bowl. Early in my experience with the laser, while using prototypes abroad, I, like many other surgeons, found cortex removal to be more challenging. But since taking delivery of our laser, and using my own I/A instrument, I’ve not found cortex removal to be a problem. The instrument has an angled tip, with a custom made, enlarged aspiration port.” Dr. Nichamin says that this instrument, which he has used for years to increase the speed and efficiency of cortical cleanup, will soon be commercially marketed specifically for femto-assisted cataract surgery, and that he has no financial interest in it.

Surgeons also say their LensAR systems have been able to fragment even very hard nuclei. “I’ve removed a light-perception cataract with it,” says Dr. Visco. “It has a very low cumulative dissipated energy during cataract surgery.”

LensAR isn’t approved to perform corneal relaxing incisions to treat astigmatism, though Dr. Visco says the company has submitted its data to the Food and Drug Administration. Despite that, due to the recent ruling by the Centers for Medicare & Medicaid, surgeons using a femtosecond laser system to help accurately implant a premium refractive IOL, such as a multifocal, toric or accommodative lens, can bill the patient separately for the use of the femtosecond system’s advanced imaging technology, OCT or otherwise.

“CMS came to understand that there was a lot more to the technology, and recognized that the imaging aspect represented an entirely new facet of the surgery,” says Dr. Nichamin. “We are now able to image the anterior segment in a way that provides dramatically greater detail and information that may lead to better refractive results, specifically in conjunction with premium implants. As such, one can appropriately charge a patient for use of the laser when implanting a toric or presbyopia-correcting lens, or when performing laser-assisted corneal relaxing incisions.”  REVIEW
Show more on: NEW TECHNOLOGY

Get the Most from Your Kamra 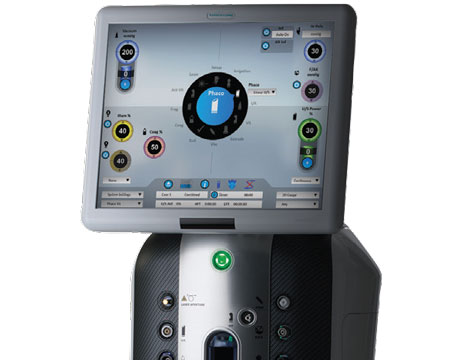