When surgeons discover a better way to treat their patients—especially when the option is backed by research—they’ll gladly adopt it in their practices. This seems to be the case with corneal cross-linking, which, though unapproved, promises to be a popular option when it becomes available for many of the surgeons on Review’s refractive surgery e-mail survey, with 51 percent of them saying they’re very interested in doing it. They say it might be a more lasting solution for keratoconus sufferers, and help patients who don’t have a lot of options.

These are just some of the findings from this month’s e-mail survey on refractive surgery. The survey e-mail was opened by 1,400 of 10,000 subscribers to Review’s electronic mail service (14 percent open rate), and of those, 67 surgeons (5 percent) responded. Here’s what they had to say.

Surgeons appear to like what they’re hearing about this option for keratoconus sufferers and those with post-LASIK ectasia. In addition to the 51 percent who are very interested in cross-linking, 37 percent say they’re somewhat interested in it. Sixteen percent say they’re not interested in it. “I’m already using it as part of an FDA clinical trial, and I’m very happy with the results,” says Gregory Parkhurst, MD, of Houston. “It appears to be standard treatment for corneal ectatic disease internationally and will likely become so in the United States after approval.” Cristobal Mendez, MD, of San Juan, Puerto Rico, is looking forward to giving the procedure a try. “I have a large number of keratoconus patients—more than 5,000!” he says. “And this procedure might give them a permanent solution that at this stage I don’t have.” A surgeon from Texas says he is very interested in it “in order to get better results in patients with hyperopia and to do thinner/forme fruste cases.” Albuquerque, N.M., corneal specialist David Bernitsky, MD, is cautiously optimistic, and likes cross-linking’s potential. “As a corneal specialist I see lots of KC and would like some option other than transplant, RGPs and Intacs,” he says. A surgeon from North Carolina, though, says he’s not interested in cross-linking because he “doesn’t see enough of these patients to make it worthwhile.”

In terms of the procedure surgeons say they use for the majority of their cases, 39 percent choose custom LASIK, 25 percent use conventional LASIK, 18 percent like PRK, 5 percent do epi-LASIK and 2 percent perform clear lens extraction and monofocal intraocular lens implantation. As for LASIK volume, 34 percent of respondents perform between five and 20 cases per month, 28 percent do 21 to 50 and 19 percent do fewer than five. On the high end, 13 percent perform 51 to 75 cases, 2 percent do 76 to 100 and 4 percent do more than 100 cases each month. The average per-eye charge for LASIK reported on the survey is $2,545.

When faced with a patient on the high end of myopia, -11 D, 71 percent of the surgeons say a phakic IOL is the best choice. Nineteen percent say they’d do LASIK, 10 percent like PRK, 5 percent prefer LASEK and another 5 percent would use CLE/IOL.

Dr. Parkhurst thinks the phakic lens is a good option. “The refractive effect is more predictable when compared to LASIK/PRK,” he avers. “There’s also no worry about inducing aberrations from a large corneal ablation. Vision quality has been proven to be superior to LVC in these patients, and it’s easier to calculate the IOL power in the future when it’s time for cataract surgery. When compared to CLE, I prefer phakic IOLs for high myopia because there has not been a significant rate of retinal complications either in surgeons’ clinical experience or in FDA clinical trials. There is higher risk of retinal tear with and without detachment when the volume of the crystalline lens is removed and replaced with a synthetic IOL, particularly in high myopes with long axial lengths.”

For the +2 D hyperope, LASIK is the most popular option, chosen by 82 percent of the respondents. Thirteen percent like PRK, 8 percent prefer LASEK, 5 percent would do CLE/IOL and 3 percent would pursue another option. “LASIK for +2 D in young hyperopes is very safe and effective,” says Dr. Parkhurst. “In older hyperopes, the higher the hyperopia and the older the patient, the more I lean toward CLE/IOL. It depends on age. If the patient’s young, then LASIK. If the patient’s post-presbyopic or has early, non visually significant cataract formation, I prefer CLE/IOL.”

For the 45-year-old hyperopic presbyope, surgeons’ preferences varied greatly. Twenty-six percent prefer LASIK monovision and 13 percent each like multifocal contact lenses and CLE/ReSTOR implantation (see graph, this page). “LASIK monovision is easy and well-tolerated,” says one refractive surgeon. Dr. Bernitsky says the choice would depend on the quality of the ocular surface. “Some 45-year-old hyperopes are actually fine for monovision LASIK,” he says. “However, if the patient has any degree of dry eye, early lens changes, steep corneas or hyperopia greater than or equal to +3 D, CLE is better.”

For the myopic presbyope, 62 percent of surgeons prefer monovision LASIK, 13 percent like bifocals, 13 percent prefer multifocal contact lenses, 8 percent choose contact lens monovision, 5 percent would do CLE/Tecnis implantation and 3 percent would choose CLE/ReSTOR. Though Dr. Parkurst says LASIK monovision would be his first choice, he could see situations where lens-based procedures might be better. “LASIK monovision is safe and effective in patients who have successfully adapted to monovision contact lenses,” he says. “CLE with either the ReSTOR or Tecnis multifocal is a reasonable option depending upon the rest of the history, the level of myopia and the health of the cornea versus the health of the crystalline lens. I’d use a modified monovision approach with Crysta­­lens if there were structural or optical issues with the cornea that might disrupt safe LASIK and/or multifocality.”

When surgeons have to go back and enhance an eye that has had LASIK, 57 percent prefer to lift the flap and ablate the bed. Forty-six percent leave the flap down and ablate the surface, and only 2 percent will recut the flap before ablating. “I’ll relift the flap if it’s been less than three years since the first procedure,” says Woodway, Texas, surgeon George Walters, “because the surgery is tolerated well if care is taken to avoid epithelial ingrowth.” Other surgeons feel similarly, though the postop period varies. Los Angeles surgeon James Salz says that he prefers flap lift “during the first two postop years since complications such as ingrowth are more frequent after two years.” The surgeons who prefer to perform surface ablation over the flap instead of lifting it say their approach is safer, but for different reasons. “When you ablate the flap,” says Chicago surgeon Jonathan Rosin, “there’s no possibility for flap-related complications such as epithelial ingrowth, torn flaps, et cetera.” Another surgeon agrees, saying, “It’s safer, with less risk of epithelial ingrowth, and it also permits the use of larger ablation patterns over older flaps.”

Twenty-three percent of the surgeons say they implant phakic lenses in their practices. Here are their thoughts on the pros and cons of phakic IOLs.

“They give good results and excellent vision,” says one surgeon. “Financially, though, they’re not as rewarding as LASIK. I reserve them for higher myopes.” Dr. Bernitsky uses the Visian ICL, but says, “I wish it came in quarter-diopter increments and that the cost were lower.” Another surgeon, though, says he likes the Visian ICL with the KS-AquaPORT because, “it’s easy to perform, has a fast recovery and is a one-step procedure.” Dr. Parkhurst says he appreciates phakic IOLs’ vision quality and removability. “I like the quality of vision with the Visian ICL procedure,” he says. “And the fact that the ICL is removable makes future cataract IOL calculations easier in comparison to patients who have had prior corneal refractive surgery. Also, phakic IOLs essentially induce no dry eye, which can be an issue with corneal refractive surgery in certain patients.”  REVIEW
Show more on: CORNEA

Retinal specialists unpack the data and discuss how it can be applied in the clinic. Read More
Cornea

A look at the various ways to stiffen the cornea and the results they’re producing. Read More
Cornea

Tips and techniques for working with the first toric presbyopic intraocular lens approved in the United States. Read More
Cornea

Cataract Surgery in the Patient with Uveitis

A Stepwise Approach To Laser PTK

How to Make a Pterygium History 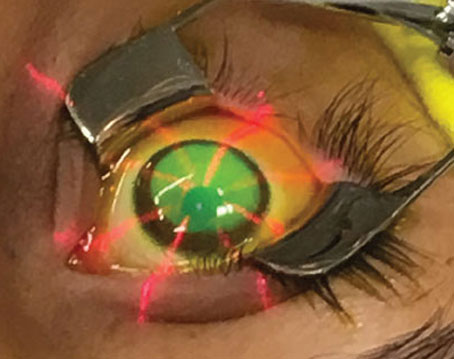 Cross-linking 2020: Closer to the Holy Grail