Presentation A 48-year-old Caucasian male presented to the Wills Eye Emergency Department complaining of blurry vision in both eyes. He noted that his vision had become increasingly blurry over approximately one to two months. He also noted that his visual problems made driving and walking difficult. He reported no prior history of vision loss and had no history of eye surgery. He denied double vision, eye pain or change in his color vision.


Medical History
The patient had a history of human immunodeficiency virus on highly active antiretroviral therapy (HAART), hypertension and coronary artery disease. He had been hospitalized three months prior for a bacterial empyema caused by a Staphylococcal aureus pneumonia, but he had fully recovered and was now off antibiotics. Review of systems was positive for recent memory problems and perseveration of thought. He denied numbness, tingling, weakness and any changes in his speech or language. He reported compliance with his medications which included carvedilol, amlodipine, pravastatin, clopidogrel, levofloxacin and HAART (ritonavir, raltegravir, atazanavir, emtricitabine, tenofovir). He denied alcohol, tobacco or intravenous drug use. 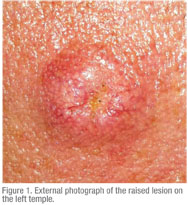 Examination
Visual acuity with correction was 20/80 in the right eye and 20/150 in the left eye. He had difficulty visualizing an entire line of letters and his vision improved to 20/30 in each eye when reading single letters. He was slow and labored in reading the eye chart and needed to be continuously prompted. On confrontational visual fields, his visual fields were constricted in both eyes but he gave variable responses at times, stating that he was unable to count fingers at 12 inches. He was unable to read any of the Ishihara color plates, including the test plate. His pupils were briskly reactive and his extraocular movements were full. He was noted to have an approximately 2-cm raised lesion on his left temple with a central ulceration (See Figure 1). His slit-lamp examination was notable only for 1+ nuclear sclerosis cataracts in both eyes. His fundoscopic examination showed no evidence of retinopathy and his optic nerves were without edema or pallor in both eyes.

What is your differential diagnosis? What further workup would you pursue?
Please click this link for diagnosis, workup, treatment and discussion.
Show more on: OCULAR DISEASE

Following episodic pain and redness for some months, a sudden onset of intense pain brings a patient to the ER. Read More
Ocular Disease