Dry-eye symptoms are experienced by a significant portion of adults, especially with aging. In recent years being able to detect signs of ocular surface trouble in its very early stages has become increasingly important as surgical procedures such as LASIK and PRK have become more common. These procedures can make dry eye worse, and that, in turn, can have a dramatic effect on the success of the surgery and the happiness of the patient.

Now a new test that can detect a marker for inflammation in a miniscule sample may provide evidence of the early presence of ocular surface disease and/or dry eye. The device, called the RPS InflammaDry Detector, was developed by Rapid Pathogen Screening (Sarasota, Fla.). It detects the Presence of MMP-9, a cytokine produced by epithelial cells experiencing inflammation that appears to be a reliable marker for the presence of early ocular surface disease and dry eye. (A similar test for adenovirus, also made by RPS, has already been approved by the Food and Drug Administration and is available to clinicians in the United States. The new test is now under consideration by the FDA.)

“Testing has demonstrated a very high correlation between the presence of MMP-9 and dryness, and MMP-9 is not found on normal eyes,” says Herbert E. Kaufman, MD, Boyd Professor of Ophthalmology, Pharmacology and Microbiology at the Louisiana State University Medical School. (Dr. Kaufman is a consultant to and an investor in RPS.) “In fact, the MMP- 9 molecule may indicate more than just insufficient moisture on the eye; I suspect that meibomian gland disease and other inflammation of the ocular surface also elevate MMP-9. It’s an effective way to separate normal eyes from dry eyes.

“In addition,” he says, “several papers in the literature suggest that the presence or absence of MMP-9 may tell you whether or not a patient will respond to treatment with cyclosporine, doxycycline or steroids.1,2

Treating with those drugs causes the MMP-9 to disappear, as the test can demonstrate. So the test tells you when there’s a problem that needs to be addressed; it lets you predict whether anti-inflammatory treatment will be helpful; and it gives you a way to monitor the success of treatment.”


Performing the Test
“This is an incredibly simple and inexpensive test,” explains Dr. Kaufman. “It comes in a tiny package and costs about $15. A nurse can do it in the office. The test includes a small linear applicator that you briefly touch to the conjunctiva— no anesthesia needed.

The applicator is not a micro-pipette; just touching the device to the conjunctiva is sufficient to gather a tiny sample of whatever is on the surface of the subject’s eye. After taking the sample, you snap the sample-holder into the test cassette. (See picture.)

“Next, you dip the end of the test cassette into a solution that comes with the test, for 10 or 15 seconds,” he continues. “As the solution is automatically drawn up through a conduit, it picks up antibodies to MMP-9 that are labeled with nanoparticles of gold, distributed throughout a piece of filter paper in the test cassette. Then the solution moves past the applicator tip; if those nanoparticles come into contact with MMP-9 from the patient, they pick it up. Finally the conduit localizes the gold nanoparticles that have picked up MMP-9 into a particular area. If a sufficient number of nanoparticles are localized, the result is a visible line that appears to be red (a result of the gold in the particles).

“The entire process, most of which is automatic, takes about 10 minutes,” he notes. “The presence of a red line—and its intensity—tells you whether or not MMP-9 was present in the sample, and gives you some idea of its concentration. If it’s a very deep red line in 10 minutes, then there’s probably a lot of surface inflammation.”

Compared to Other Tests
Dr. Kaufman notes that detecting the early presence of ocular surface inflammation has always been problematic. “You can look at the cornea with a slit lamp and get some idea of its condition, and you can try using tests such as Schirmer and breakup time,” he says. “But those approaches don’t have a good track record for correlating with patient symptoms or the presence of disease. The MMP- 9 test will give the surgeon concrete evidence that it’s okay to go ahead And operate on a patient. The test should even be helpful before surgery to remove a cataract or treat glaucoma.” Dr. Kaufman recalls that earlier lab tests for MMP-9 involved large, expensive, complex equipment and often required waiting overnight or for several days to see the result. “As research tools, they were wonderful,” he says. “But they really weren’t helpful for the average physician in practice, and this test is comparable in sensitivity.”

Asked how the MMP-9 test compares to other tests such as the Tearlab Osmolarity Test, Dr. Kaufman notes that they test two different things. “Hyperosmolarity is one of the conditions associated with dry eye,” he acknowledges. “But the osmolarity test requires more complex equipment than the MMP-9 test. In data submitted to the FDA on hyperosmolarity and MMP-9 as signs of dry eye, the MMP-9 compares very favorably, with somewhat better specificity. In the final analysis, you wouldn’t necessarily have to choose one test or the other, because they test for different things. Whether one has a clinical advantage over the other, or whether diagnosis is more effective if both tests are used, remains to be seen.”


More Tests to Come
Technology and test design have the potential to be used to detect other health-related factors that produce antibodies—just as it’s already being used to detect MMP-9 and adenovirus. “For example, antibodies to flu could be labeled with gold nanoparticles,” he says. “The company is currently working with the Centers for Disease Control and Prevention to develop tests for sexually transmitted disease. Again, it’s similar technology. If the sample you take contains what you’re looking for, you’ll see the red line appear. All that’s required is an antibody that only reacts to the thing you’re looking for. I think this will be a very useful technology in the future.”

With the data for approval of the MMP-9 test having been submitted to the FDA, the test’s maker hopes it will be available later this year.

Surgeons share their experience and offer strategies for making the most of these intraocular lenses. Read More
Dry Eye

This long-awaited procedure may be able to do more than just treat keratoconus and ectasia. Read More
Dry Eye

Dry-Eye Disease by the Numbers 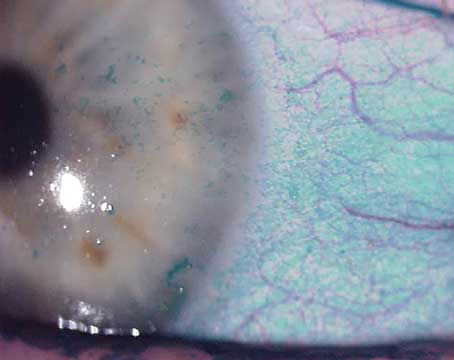 A Glance at the Dry-Eye Pipeline

Is It Dry Eye, Allergy Or Infection?