Though they often receive less attention than premium IOLs, monofocals continue to be the most commonly implanted type of lens in cataract surgery. “Conventional monofocal IOLs provide almost perfect uncorrected distance visual acuity with a minimal incidence of photic phenomena,” notes Rita Mencucci, MD, and Eleonora Favuzza, MD, at the Eye Clinic in the department of neuroscience, psychology, pharmacology and child health at the University of Florence, in Italy.

Where traditional monofocals fall short, however, is in postoperative functionality, leaving most patients needing reading glasses for focal points other than pure distance.1 Because of this, the latest trend in intraocular lenses appears to be the monofocal “plus,” a new breed of monofocal that has a little something extra in its design to offer focusing power at intermediate distances.

There are currently only two available outside the United States: Johnson & Johnson Visions’ Tecnis Eyhance and Santens’ Xact Mono-EDOF. In this article, we’ll take a look at the two latest additions to the monofocal family and how they’re performing so far.

Premium IOLs such as EDOF and trifocal lenses can offer more spectacle independence for intermediate distances than monofocals, with trifocals also offering more near vision as well,2 notes Dr. Mencucci. However, she says, “for the most part, they also have a higher incidence of visual disturbances than monofocal IOLs.” Combining monofocals’ low rate of dysphotopsias with an extended focusing range—creating a sort of hybrid monofocal—is just what this new breed aims to do.

The Tecnis Eyhance monofocal, currently available in Europe, is intended to offer improved intermediate vision. The Eyhance is available in powers of +5 D to +34 D, in 0.5-D steps. Made of UV-blocking hydrophobic acrylic, this one-piece biconvex lens features a 6-mm optic, with an overall diameter of 13 mm. The edge design is a frosted, continuous 360-degree posterior square edge.

“The new lens design is based on a continuous refractive optical surface that results in a progressive increase in power from the periphery to the center of the lens,” explains Dr. Mencucci. “This local and continuous increase in power is achieved by a higher-order asphere that smoothly changes the shape of the central part of the lens. About 85 percent of the surface is indistinguishable from the surface of the Tecnis monofocal, enabling both IOLs to provide the same primary corneal spherical aberration correction (-0.27 microns for a 6-mm pupil). Therefore, the refractive IOL design in the Eyhance IOL enables intermediate vision while keeping distance image quality comparable to a standard monofocal aspheric IOL.”

Dr. Mencucci’s team recently published a paper in the Journal of Cataract and Refractive Surgery reporting their preliminary results with the Eyhance ICB00 IOL compared to the Tecnis ZCB00 monofocal IOL.3 In the prospective case series, 80 eyes of 40 patients were evaluated at six months postoperatively and measured for monocular and binocular uncorrected and corrected (at 4 m) distance visual acuities; uncorrected intermediate visual acuity; and distance corrected, intermediate corrected (at 66 cm) and near (at 40 cm) visual acuities. The study also evaluated parameters such as photopic contrast sensitivity, binocular defocus curve, objective scatter index, and the incidence of halo and glare.

Dr. Mencucci reports, “Regarding the defocus curve, the ICB00 IOL achieved a smoother profile along the entire curve with a less abrupt decrease in visual acuity, especially within the intermediate defocus range (up to -1.5 D, corresponding to 66 cm).

“There were no statistically significant differences in terms of photopic contrast sensitivity between the two IOLs,” she continues. “Moreover, the optical quality measured with a 4-mm pupil using the AcuTarget HD Analyzer (Visiometrics), an Optical Quality Assessment System (OQAS) product based on double-pass technology, was similar.”

“In our study, no statistically significant difference between Eyhance IOL and Tecnis ZCB00 IOL was detected, regarding glare and halo perception, assessed by the NEI-RQL-42 questionnaire glare subscale,” Dr. Mencucci continues. “Up to now, no comparative studies of the Eyhance ICB00 and EDOF IOLs have been published. It would be interesting to compare the ICB00 outcomes with the results obtained with trifocal or EDOF IOLs, especially regarding intermediate visual outcomes and glare and halo perception.”

As a newcomer to the IOL market, the Eyhance has yet to make its mark on monovision research and outcomes. “My experience at the moment is limited to bilateral emmetropic targets,” Dr. Mencucci notes. “Nevertheless, it would be interesting to evaluate a ‘light’ monovision approach with this lens.”

Currently, Dr. Mencucci is implanting the Eyhance in patients who aren’t perfect candidates for multifocals or EDOFs. She adds that “there’s almost no need for additional chair time [with Eyhance], making this IOL well-suited for high-volume cataract surgery. I would like to have an Eyhance toric platform available soon.”

Santen’s monofocal EDOF is available in powers of +10 to +30 D, in 0.5-D increments. The biconvex, aspheric, EDOF, diffractive, 6-mm, glistening-free optic is made of a blue-light-absorbing hydrophobic acrylic with an overall diameter of 12.5 mm. This lens isn’t available in the United States.

“The Xact lens material is FDA-approved and it’s actually the same as Bausch + Lomb’s enVista material, just with a blue-light filter,” notes Dr. Kretz, who led the first in-human clinical trial of the Xact Mono-EDOF. “Xact is yellow; enVista is clear. The material license was sold to Bausch + Lomb.”

The 2002 clinical study in the United States with the early Santen/Advanced Vision Science model X-60 IOL enrolled 383 subjects, with 367 subjects available for examination at one year, 312 subjects available at two years and 281 available at three. Subsequent models—including the W-60R and the Mono-EDOF (ME4)—were minor modifications of the parent model X-60 and didn’t warrant additional clinical testing. The percentage of patients who saw 20/40 or better at one year was 96.7 percent (n=320).4

Those familiar with the lens say the Xact’s focus has a single peak, but it’s broad—as opposed to the narrow peak of a traditional monofocal or the bimodular peak of a conventional diffractive EDOF—with no drop in modulation transfer function between far and intermediate distance. (See the Xact MTF graph on page 48 in “Will Premium Options Still Have a Place?”.) In an optical bench study performed by Santen, the Xact IOL’s design was found to minimize the occurrence of halos in night-time conditions.5

Instances of dysphotopsias with the Xact are comparable to conventional monofocals, making this lens a good option for patients who want an improved range of vision but who don’t want to deal with the glare and halo typically found with premium IOL options, says Dr. Kretz. He adds that a low light distribution by the Xact’s optics plays a major role in minimizing dysphotopsias while elongating the range of focus. “The Xact has four diffractive rings, but the add power is very low—only around 0.75 D,” he notes. “With that small add power, it basically gives you intermediate focus because there are only four rings and the light distribution is so low.”

Low light distribution has the benefit of higher light intensity, and it means the patients won’t experience the typical levels of dysphotopsias found in premium IOLs, continues Dr. Kretz. “With a smaller area of distribution, and with a shorter defocus range due to the natural aberration of the cornea,” he says, “patients don’t see different images or halos, and they have only a little blur zone, which is just the glare they see at night. This glare isn’t significantly different from a normal monofocal.”

With the Xact, patients can expect good intermediate vision and a degree of spectacle independence, but to get truer vision, Dr. Kretz says monovision is another option. “You can decrease the level of monovision enough to 0.75 D to 1 D of defocus between both eyes,” he says. “If the patient has a very high level of spherical aberration, that usually also increases the depth of focus on a monofocal, but the Xact doesn’t offer true near vision. The limit is around 70 cm.”

“We did the initial trial at my clinic in Rheine, Germany, looking at the outcomes of the Xact Mono-EDOF IOL, compared to Santen’s refractive monofocal W-60R, which they decided not to launch,” says Dr. Kretz.

“One of the benefits of this lens is that it behaves similarly to a premium IOL but is a licensed monofocal,” Dr. Kretz says. “Because of this, there’s less need to counsel patients for any additional  dysphotopsias and side effects, which makes the whole adaption process easier.”

Dr. Kretz uses the Xact as his standard lens of choice for patients who have less than 1 D of corneal astigmatism. It’s also his lens of choice for those with private insurance or insurance that covers the cost. “I’d like to have this mono-EDOF lens in a toric version,” he says. “Santen is working on that, but it will come after they finish their toric monofocal.”  REVIEW

Dr. Mencucci has no financial disclosures. In terms of products mentioned, Dr. Kretz discloses research support from Acufocus and Santen.

Are Intraop Antibiotics Necessary in PPV?

The Keys to Multifocal IOL Centration

How to Put an IOL in Its Place 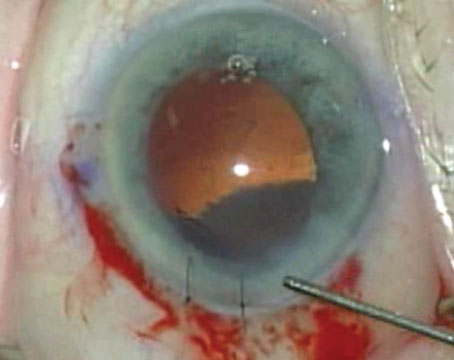