Surgeons have been combining cataract and glaucoma surgery for many years. It's still a very important part of what we do because most patients with glaucoma eventually develop cataract, and every time we do a trabeculectomy it increases the likelihood of cataract formation. Of course, in recent decades there have been significant advances in cataract surgery technique, equipment and materials. Glaucoma surgery has also progressed, in the sense that new options such as nonpenetrating surgery have appeared. However, many American surgeons still perform trabeculectomies that aren't much different from those we did 30 years ago.

I'd like to discuss some of the issues surrounding our current approaches to combining these surgeries.

When a patient has cataract and potential (or definite) glaucoma, the surgeon has to make a couple of key decisions. First, does the patient really need both surgeries? Second, if both surgeries are called for, does it make sense to do them at the same time?

Given this knowledge, when I decide whether to do a combined procedure, I first look at what's driving the surgery. If it's driven by the cataract and the patient is only on one glaucoma medicine and doing well, I'm probably not going to perform glaucoma surgery at all; it's a risk/benefit decision. I'll just do the cataract surgery, monitor the patient carefully for pressure spikes and see if the cataract surgery lowers the pressure enough to get the patient off of medication. But if the patient is on maximum glaucoma meds and needs cataract surgery, then my inclination is to proceed with the combined surgery. If the glaucoma is driving the surgery (e.g., the eye has markedly elevated IOP and nerve damage), I may choose a staged approach, performing the glaucoma surgery first.

Most of the patients I see are referred to me because their glaucoma is serious, so they tend to already be using two or three medications. That encourages me to proceed with glaucoma surgery rather than wait to see if the cataract surgery will resolve the pressure concern. But I think the trend in the community is that fewer cases are being done because of the positive effect of the cataract extraction. Certainly, it's an individual decision for each case.

The second concern is whether to do both surgeries at the same time. Some surgeons feel that sequential surgeries separated by six months or so make the most sense; after all, you won't know how much the cataract surgery is going to lower the IOP until you've done the surgery. In some cases, you may not need to do the trabeculectomy at all. This is a valid argument, but the downside of this approach is that if the second surgery is necessary the patient has to undergo two surgeries, which adds expense and risk. I favor doing the surgeries together for that reason. But again, you have to individualize.

Here are a few strategies that may help make a combined surgery go more smoothly:

• Consider starting the glaucoma surgery before doing the cataract. When combining surgeries, I start superiorly by creating the scleral flap for the glaucoma surgery. If I'm using mitomycin-C, which I usually do, I put it under Tenon's capsule; then I move to the temporal side for the cataract surgery. After 90 or 120 seconds I remove the mitomycin and proceed with temporal clear cornea cataract surgery using foldable lenses. Once that's finished, I place a couple of sutures across the wound; then I move superiorly and finish up the glaucoma procedure.

Some surgeons prefer to do the cataract portion of the surgery before the glaucoma portion. Then they close the eye, put in a suture and move superiorly. The reason I prefer the other approach is that I like to make my initial (nonpenetrating) incision with the eye firm. Either approach can work, but I find it technically easier to start the glaucoma procedure first. (Another approach is to do both surgeries superiorly, performing clear cornea cataract surgery adjacent to the trabeculectomy site.)

• Avoid iridectomies. Avoiding iridectomies decreases the chance for hyphemas and inflammation. It also makes it unnecessary to have the patient stop taking Coumadin or anticoagulants, although this is an area of debate. Some research has suggested that this may increase the risk for patient bleeding, but we've analyzed our surgical data and we didn't find any increase in bleeding. On the plus side, allowing patients to continue with their anticoagulation medicines decreases the risk of strokes and heart attacks in the perioperative period.

• Maintain the chamber. When you're combining surgeries it's critical to prevent the IOP from dropping to zero. This is advisable during simple cataract surgery, too, but the risk of choroidal effusions and other complications is pretty low in that situation. The risk is much greater during glaucoma surgery, particularly if you're not asking the patient to discontinue anticoagulation meds.

To help maintain the chamber I use a relatively small, 2.2-mm incision, and I do the procedure using low flow. During the glaucoma surgery I also maintain the chamber with a dispersive viscoelastic rather than a cohesive one, so it stays in the anterior chamber. This makes the viscoelastic a little harder to get out at the end of the procedure, but the chamber stability is worth the effort. (I don't mind leaving in a little viscoelastic to prevent any chamber shallowing.) I also make sure to close with sutures so the chamber depth and pressure are maintained; I try to keep the pressure around 15 mmHg. At the end I make sure we have flow into the subconjunctival space with chamber depth maintained. I always use a fornix-based peritomy and make sure closure is tight so there's absolutely no leak.

• Use a broad distribution of mitomycin-C. Research from Peng Tee Khaw at in has demonstrated the benefits of using a broader surface area of distribution of mitomycin-C than most of us were using previously. In the past we used 0.4% mitomycin for five minutes under the flap and right around the superior scleral area; we ended up with cystic blebs that would eventually leak. Now, I use Merocel corneal shields cut in half—three of them—which act as sponges. I soak them in 0.2% mitomycin and place them more posteriorly for no more than 90 seconds. The result is a more diffuse, low-lying bleb, very different from the cystic blebs we used to get.

• Stay alert for complications. Doing cataract surgery in patients who have glaucoma is often more problematic than doing it in healthy patients. You may encounter pupil abnormalities; pseudoexfoliation; weak, loose zonules; a more brittle capsule because of glaucoma medications; or posterior synechiae, making the technical aspects more rigorous. (Small pupils may be associated with intraoperative complications, including vitreous loss.) The glaucoma portion of the surgery, in contrast, is usually unaffected by the presence of cataract.

Note that if the patient has posterior synechiae, you have to break all the synechiae all the way out to the periphery, not just at the pupillary margin.

• Try the Malyugin ring for managing difficult pupils. I think a major advance in managing the pupil is the Malyugin Ring (available from MST Technologies), a rectangular device that stretches the pupil to about 6 mm wide, replacing devices such as iris hooks. (See image, above.) It's easy to insert and remove and fits through a 2.2-mm incision. It's very helpful when managing patients with small pupils or intraoperative floppy iris syndrome, especially when complications can be more of an issue because of the combination surgery.

• Consider using one of the newer glaucoma surgeries. Although trabeculectomy is still the most common surgery combined with cataract surgery, there are many newer surgical alternatives including stents, canaloplasty, endoscopic cyclophotocoagulation and other nonpenetrating procedures. These procedures are generally considered safer than trabeculectomy; the argument against using them is that they don't lower IOP as much as trabeculectomy. (And of course, being relatively new, fewer surgeons are practiced at performing them.) Their efficacy at lowering pressure is still being debated, with new data being published periodically.

Having more options is always a good thing, so I would encourage surgeons to give them a try. In fact, in some European countries, trabeculectomies are no longer the most frequent choice for glaucoma surgery. Having a non-penetrating surgical option, for example, could be very helpful when a patient is at high risk for long-term blepharitis, endophthalmitis or hemorrhage.

Some surgeons like to combine cataract surgery with ECP; it provides a pretty good drop in pressure, and despite a little more inflammation, the complication rate is very low. You've already made the incision, so you can put the lens in and then lift the iris up with viscoelastic. This allows direct visualization for 270 degrees of ciliary body ablation with ECP. It's pretty easy to do and may avoid complications (compared to trabeculectomy) when a patient is on anticoagulants.

Unfortunately, the learning curve for some of the newest procedures is high enough that many surgeons don't get to be experienced at using them. Nevertheless, I think it's important for people to continue to learn new options. Some of these show real promise and offer significant advantages over trabeculectomy.

A Treatment That Works

Given the extra cost and risk associated with multiple surgeries, combining cataract and glaucoma surgeries will continue to be a valuable option for the foreseeable future. And with new surgical alternatives for lowering IOP that promise increased safety, along with ever-better tools and techniques for cataract surgery, outcomes should continue to improve.

Dr. Crandall is a clinical professor, senior vice chair of ophthalmology and visual sciences, and director of glaucoma and cataract at the , . 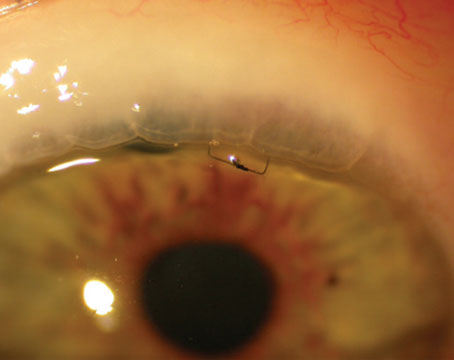 Are Two MIGS Surgeries Better Than One?