A group of surgeons from Los Angeles, Seoul, South Korea and Milan say that, though cataract surgery tends to lower patients’ intraocular pressure, it doesn’t seem to have a similar beneficial effect on glaucoma patients’ visual field progression postop.

In the study, consecutive open-angle glaucoma patients who underwent cataract surgery and who had at least four visual field tests and at least three years of follow-up before and after surgery were retrospectively reviewed. Mean deviation (MD) rate, visual field index (VFI) rate, pointwise linear regression (PLR), pointwise rate of change (PRC), and the Glaucoma Rate Index (GRI) were compared before and after cataract surgery.

A prespecified, secondary analysis of a two-surgeon, patient- and outcome-masked randomized clinical trial was conducted at the Casey Eye Institute in Portland, Oregon, and Byers Eye Institute in Palo Alto, California. The study was conducted between January 20, 2015, and April 26, 2017. The study enrolled 38 individuals and included 50 eyes with isolated endothelial dysfunction. Study eyes were randomized to receive either UT-DSAEK or DMEK. Responses to the National Eye Institute Visual Function Questionnaire-39 administered at baseline, and three and 12 months postoperatively were analyzed using the NEI-defined traditional subscales and composite score on a 100-point scale and with a Rasch-refined analysis.

The second eye from a single participant was excluded, along with any questionnaires relating to the first eye after second eye surgery, for evaluation of 38 eyes at baseline and three months, and 26 eyes at 12 months. Mean baseline visual acuity was 0.35 ±0.31 logMAR in the DMEK arm and 0.28 ±0.22 logMAR in the UT-DSAEK arm. Each arm consisted of 19 participants: 18 individuals with Fuchs’ dystrophy and one participant with pseudophakic bullous keratopathy.

• Eyes randomized to DMEK had only 0.9 points more improvement in NEI VFQ-39 composite score at three months compared with UT-DSAEK after controlling for baseline NEI VFQ-39 (-6.2 to 8.0; p=0.80).

Investigators concluded that improvement in vision-related quality of life wasn’t shown to be greater with DMEK than with UT-DSAEK.

Surgeons from the East and West Coasts contributed another datapoint to the perennial debate about anterior chamber intraocular lenses vs. scleral-sutured posterior-chamber IOLs after pars plana vitrectomy.

The study was a retrospective, interventional case series of eyes undergoing combined PPV and IOL placement for retained lens material, aphakia or dislocated IOL. Eyes with a history of amblyopia, corneal opacity or retinal or optic nerve disease were excluded. Outcome measures were change in visual acuity, and occurrence of postoperative complications with minimum follow-up of a year.

In terms of complications, eyes undergoing ACIOL placement had a significantly higher rate of transient corneal edema (30.3 vs. 6.7 percent, p=0.02) compared with eyes undergoing scleral fixation of a PCIOL.

In light of the results, the surgeons say that both modalities resulted in similar visual outcomes.

Researchers from the Aravind Eye Hospital and Post-graduate Institute of Ophthalmology in Coimbatore, India say that Acanthamoeba co-infection appears to be more often associated with microbial keratitis than some might think.

In this prospective cross-sectional study, patients presenting with stromal keratitis were additionally tested for Acanthamoeba, regardless of the clinical diagnosis. The investigators used culture positivity as the gold standard.

The researchers say that the results appear to show that Acanthamoeba infections are much more frequent than most think, and aren’t just restricted to contact lens wearers. They add that anticipating coinfections is necessary for establishing a diagnosis, as well as a proper therapy.

They classified the eyes into three types: nonundulating RPE; undulating RPE; and wedge-shaped RPE. They compared the retinal vessel densities, retinal thickness and choroidal thickness of a 3-mm-diameter zone. Their findings included the following:

Researchers reported that altered features of the RPE on optical coherence tomography might indicate advancement in disease and be part of an overall degenerative process in these eyes.

Researchers from the University of Pennsylvania’s Scheie Eye Institute say surgeons and their patients probably don’t need to worry about the risk of progression to wet age-related macular degeneration if the patients are using beta blockers.

In a retrospective cohort study of patients from 2000 to 2014, using data from a large national U.S. insurer’s claims database, researchers identified 18,754 beta blocker patients and 12,784 calcium channel blocker patients who met the criteria for inclusion.

After controlling for covariates, patients on beta blockers were at lower risk for neovascular AMD at both 90 and 180 days than patients on calcium channel blockers (HRs: 0.67-0.71; p<0.01 for both) or diuretics (HRs: 0.55-0.62; p<0.01). Patients on beta blockers, versus angiotensin-converting enzyme/angiotensin receptor blocker at all time points, and beta blockers versus calcium channel blockers and diuretics at 365 days, didn’t have a significantly lower association with neovascular AMD (HR: 0.73-0.85; p>0.06 for all).

Ultimately, the researchers say there was no evidence that beta blocker use increased the risk of wet AMD vs. other antihypertensive meds. REVIEW 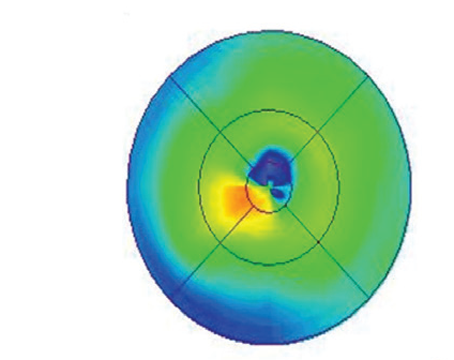 The Rise of the Machines in Retina