Presbyopia is the most common refractive error and currently affects approximately 2 billion people worldwide.1 Corneal inlays are one of the newest options for treating presbyopia, and their biggest advantage is that they are additive and do not remove any tissue. This allows patients to be treated with any advanced procedures that may be developed in the future.

“Emmetropic presbyopes are the hardest patients to treat,” says John Hovanesian, MD, who is in private practice in Laguna Hills, Calif. “These patients have had good distance and near vision their entire lives and don’t want to wear reading glasses. Most of these patients, typically the younger ones, have a bias against monovision, which would be the only other option.”

Currently, three corneal inlays are in various stages of development. The Flexivue Microlens (Presbia) is a refractive inlay that alters the index of refraction by using a bifocal optic. The Raindrop (ReVision Optics) is a reshaping inlay that changes corneal curvature, and the Kamra (AcuFocus) inlay, which was recently approved by the Food and Drug Administration, employs small-aperture optics to increase the depth of focus.

All are implanted in the nondominant eye. “All of the inlays are considered modified monovision, because they are all intended to be done in a single eye. One of the advantages of this is that you retain better distance vision while still gaining good near vision,” says Richard Lindstrom, MD, who is in private practice in Minneapolis.

Each of the inlays has advantages and disadvantages. “One of the advantages of all of the inlays is that they are removable and, for the most part, reversible. It’s not like a corneal laser procedure, which creates a multifocal corneal shape that is irreversible,” adds Michael Gordon, MD, who is in private practice in La Jolla, Calif.

The Microlens is a transparent, hydrogel-based, concave-convex lens. It has a plano central area to provide distance vision, surrounded by rings with different add powers to provide intermediate and near vision.It is 3 mm in diameter and 15 to 20 µm thick, depending on the additional power. The central 1.8 mm diameter is plano, and the inlay power ranges from +1.25 to +3.0 D in 0.25-D increments. There is a 0.15-mm hole at the center of the inlay that facilitates oxygen and nutrient transfer into the cornea. This inlay is placed in a pocket created in the cornea using a femtosecond laser.

In a study conducted in Greece, 47 patients were implanted with the Flexivue Microlens and were followed for 12 months.2 One year postoperatively, patients’ mean uncorrected near visual acuity significantly improved from 0.68 ±0.03 logMAR to 0.14 ±0.9 logMAR in the operated eyes and from 0.53 ±0.13 logMAR preoperatively to 0.13 ±0.13 logMAR binocularly. UCNVA of the operated eyes was 20/32 or better in 75 percent of patients 12 months after inlay implantation, and mean uncorrected distance visual acuity in operated eyes significantly decreased from 0.06 ±0.09 logMAR preoperatively to 0.38 ±0.15 logMAR, but it did not change significantly binocularly.

Dr. Gordon participated in Flexivue’s clinical trial. “We have had great success with the Flexivue in my hands in the clinical trial,” he says. “Most people love it. We are seeing great patient acceptance. They are reading glasses-free. They do not have issues driving at night from glare. The beauty is that it is a refractive inlay, meaning that it comes in powers. Younger presbyopes can have a lower-power implant. As these patients get older, the lower-power implant can be removed, and a higher-powered one can be implanted. The Flexivue has a lot of potential, I believe, and is probably 1.5 years away from approval. It’s reversible. It’s upgradable. It’s very well-tolerated, and it’s easy to implant. I have been impressed with the Flexivue both as a product and as a surgical procedure.”

This corneal inlay is a clear, permeable, positive meniscus-shaped hydrogel implant with a diameter of 2 mm, a center thickness of 32 µm, and approximately the same refractive index as the cornea. While it has no refractive power, it alters the eye’s refractive power by increasing the central radius of curvature of the part of the cornea overlaying the implant. It is thinner at the edge than it is at the center, so when implanted, it creates a hyperprolate corneal shape, which results in a multifocal cornea. Oxygen and nutrients freely pass through the highly permeable hydrogel material used for the inlay.

Two studies have been conducted recently, and both used keratotomy to create a flap with a diameter greater than 8 mm and a depth of 130 to 150 µm using a femtosecond laser.3,4 An inserter for the Raindrop inlay is provided by the manufacturer, and the inlay is placed on the stromal bed and correctly positioned over the center of the pupil. Then, the flap is replaced over the inlay.

In one study, 19 presbyopic emmetropes were implanted with the inlay, and 12-month postoperative results were reported.3 All patients achieved UCNVA of 0.2 logMAR or better in the operated eye. Mean UCNVA was better than 0.1 logMAR at all visits, including the final follow-up after 12 months. Additionally, all patients achieved a binocular UCNVA of 0.18 logMAR or better. By one month postoperatively, the mean binocular UCDVA was 0.01 logMAR and remained at this level or better until 12 months postoperatively.

Mean photopic contrast sensitivity in the eye with the inlay was similar to preoperative levels at both the six-month and 12-month follow-up visits.

All participants in this study completed a patient questionnaire concerning spectacle wear and satisfaction. Twelve months after implantation of the inlay, 95 percent of patients said that they were satisfied or very satisfied with their near and intermediate vision. All patients reported that they were very satisfied with their distance vision and the overall visual outcome. Additionally, 84 percent reported rarely, if ever, wearing glasses.

Patient satisfaction questionnaires were also completed by all patients in this study. Fourteen of the 16 patients said that they were satisfied or very satisfied with their near, distance and overall vision.

“The Raindrop has finished clinical trials, and data are being submitted to the FDA,” Dr. Lindstrom says. “It works similarly to presby-LASIK. There is some loss of distance vision with this approach, and it looks like you only lose a line or two at distance and you gain three to four lines at near, so it is a reasonable trade-off. It has similar advantages and disadvantages to a multifocal IOL or contact lens, so most eye doctors are familiar with the optics.”

The Kamra is currently the only FDA-approved corneal inlay. The current version is a 5 µm thin microperforated artificial aperture made of polyvinylidene fluoride with incorporated nanoparticles of carbon. It has a total diameter of 3.8 mm and a central aperture of 1.6 mm. The inlay has 8,400 holes that range in size from 5 to 11 µm in diameter to allow water and nutrition flow to prevent corneal thinning and epithelial decompensation.

The Kamra inlay is based on the pinhole effect, and it increases depth of focus and consequently improves near and intermediate visual acuity. Because it doesn’t split light between near, intermediate and distance focal points, patients maintain their binocular summation even though the inlay is only implanted in the nondominant eye.

Currently, the inlay is implanted in a lamellar pocket created with a laser that is 220 µm or deeper. Creating a pocket with a femtosecond laser reduces the impact on corneal nerves and reduces the risk of dry eye postoperatively.
Minoru Tomita, MD, PhD, of the Shinagawa LASIK Center, Tokyo, and colleagues have conducted two large studies using the Kamra inlay.5,6 One study included 223 eyes in 223 patients who had previously undergone LASIK and then were implanted with the current version of the Kamra inlay.5

The patients’ mean age was 53.6 years (range: 44 to 65 years), and mean manifest spherical equivalent was −0.18 D (range: −1.00 to +0.50 D). The mean UCDVA in the operated eye decreased from 20/16 preoperatively to 20/20 after the inlay had been implanted for six months. Mean UCNVA improved from J8 to J2. Patients’ dependence on reading glasses and their satisfaction with vision without reading glasses significantly improved by six months postoperatively.

An earlier study conducted by Dr. Tomita and colleagues included 360 eyes in 180 patients who underwent simultaneous corneal inlay implantation and LASIK to treat presbyopia in patients with hyperopia, myopia or emmetropia.6 Preoperative UCDVA and UCNVA were significantly different between the three groups of patients, while no significant difference was seen six months postoperatively.

“The Kamra uses small-diameter aperture optics and hyperfocality,” Dr. Lindstrom says. “This is basically the optical system that is used in a disposable camera that allows a decent picture at distance, intermediate and near. The eye needs to be set slightly myopic. The ideal target for the Kamra would seem to be -0.75. You get a close to 3-D increase in depth of focus, which allows functional distance, intermediate and near vision. The negative is that if you use small-diameter aperture optics in a dusky mesopic environment, you still have a small aperture, so things are dimmer in a low-light environment. You need significant light for this system to operate well. That’s why you only do it in one eye.”

“One consideration with this implant is that it is dark in color,” Dr. Hovanesian adds. “If it is centered over the pupil, it looks beautiful, but in lighter-colored eyes when viewed from the side, sometimes it can show. It works very well in terms of achieving near vision while not too badly degrading distance vision.”

He also explains that all three implants have some need for follow-up, and the follow-up care for these patients is not as simple as with LASIK. “You need to be watchful for signs of intolerance or signs of dry eye, and there is an explant rate of about 10 percent. This is better than LASIK because our alternative to this procedure is to just give a patient monovision, and of course monovision degrades the patient’s distance vision in the treated eye,” he says.

Although the three inlays have different mechanisms of action, they all look promising. “All of these approaches work,” Dr. Lindstrom says. “Each one arguably has some features that one doctor might like over another. I’m an advocate of all of these. I’d love to see them all get approved.”  REVIEW

Premium IOL and refractive surgery patients—and surgeons—may have a new option to protect against a bad outcome. Read More
Cornea

After decades of not much change, microscopes are beginning to change the way surgeons operate. Read More
Cornea

Larger studies are needed to determine the best dosage and method of delivery of current experimental therapies. Read More
Cornea

Physician burnout appears to be on the rise. Here’s why, along with some ideas on how to get better control. Read More
Cornea

Multiple factors continue to push ASCs to the forefront as a better alternative to the hospital. Read More
Cornea

How to Make a Pterygium History 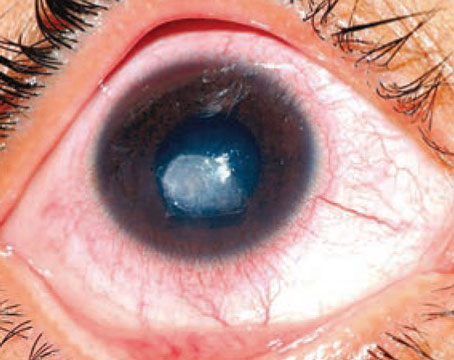 Solving the Puzzle of Corneal Ulcers

How FLAK Is Changing Keratoplasty