About 25 percent of patients with uveitis will develop elevated intraocular pressure at some time during their clinical course. (Different studies have found percentages ranging from 10 to 39 percent.) In chronic uveitis the percentage is higher, approaching 50 percent. This increase in pressure often appears to be due to multiple mechanisms.

In the past, managing these patients was a challenge. Even though the number of patients in this situation is limited, treatments often failed to produce ideal outcomes. However, with today’s ever-growing set of treatment options, that has changed. Here, I’d like to discuss the main options we currently have available for helping these patients, and review what the published evidence reveals about each option’s effectiveness in this situation.

Medical Management
Nearly all of these patients ultimately require treatment with glaucoma medications, although about a quarter of them also require glaucoma surgery to control their pressures. Not surprisingly, some options work better than others.

In the case of uveitic glaucoma, we’re addressing two conditions at the same time: inflammation and glaucoma. Initially it’s important to try to get control of the inflammation. Cycloplegic drugs, corticosteroids, nonsteroidal anti-inflammatory drugs and immunomodulatory therapy are all approaches that may be effective for this purpose.

Immunomodulatory medications are often the preferred drugs for long-term management of these patients. In fact, a major advance in the management of these cases has been having a greater choice of immunomodulatory medications, along with a better understanding of them. However, most ophthalmologists are not comfortable selecting these medications and monitoring patients for any side effects. For that reason it’s important to work with a uveitis specialist, rheumatologist, internist or other clinician who can help manage these patients.

Once the inflammation is under control we can address the elevated pressure. Options include:

• Aqueous suppressants, including beta blockers and carbonic anhydrase inhibitors. These are still the mainstay for therapy in these patients. They can reduce IOP even when conventional outflow is impaired in uveitic glaucoma.

• Alpha-2-agonists. These drugs may reduce IOP effectively despite the impaired outflow caused by uveitic glaucoma.

• Prostaglandins. These are OK to use in this situation, but they have a slow onset of action. That’s not terribly helpful in a patient who has an acute presentation of high pressures. However, prostaglandins can be very helpful for patients over the long term, especially if they have well-controlled uveitis.

Incisional Surgery
Incisional surgery usually means trabeculectomy or drainage implants, and both work well in these patients. If trabeculectomy is performed using antifibrosis drugs (most commonly mitomycin-C today) the success rate can range up to 80 or 90 percent in these patients, according to several relatively short-term studies—al-though some have found success rates as low as 50 percent. If trabeculectomy is done without the use of antifibrosis drugs, it has a very poor rate of success—53 percent at five years, according to one study.3 Ultimately, if the uveitis is very well controlled or inactive and there’s been no previous surgery, the success rates achieved with trabeculectomy are very similar to those seen in patients with primary open-angle glaucoma.4,5 Predictably, given the nature of trabeculectomy, there are some long-term complications and failures. Nevertheless, trabeculectomy can be a useful option in patients with well-controlled uveitis.

Glaucoma drainage implants are also effective in these patients. Currently, this is a popular choice among clinicians treating uveitic glaucoma. Like trabeculectomy, the success rate with drainage implants seems to be tied to how well the uveitis is controlled. Meta-analysis has shown that better control of uveitis is associated with higher success rates, compared with poor control of uveitis.6

Other Surgical Procedures
Nonpenetrating surgery in pa-tients with uveitis and glaucoma has been evaluated in a few studies, but there’s no proven superiority to trabeculectomy.9,10 In contrast, the new minimally invasive glaucoma procedures, or MIGS, are under intensive evaluation. Many of these surgeries, using tools such as the Trabectome, the Kahook Dual Blade (KDB) or the Trab 360, which can perform a 360-degree trabeculotomy through a single clear corneal incision, seem to be effective in adult patients. One study involving 24 adult patients treated with the Trabectome found a 74-percent success rate at up to five years of follow-up, with some significant reductions in IOP—up to 40 percent—during that period.11 So this can be a promising approach.

It’s worth noting that some of the MIGS devices that have small lumens may experience some blockage caused by in-flammatory debris. The EX-PRESS device, for example, has a 50-µm lumen at its narrowest point, and we’ve seen a small rate of obstruction with inflammatory debris in these patients. This may also be an issue in other small-lumen MIGS devices, such as the Xen, iStent and others. Surgeons are currently trying these in uveitic glaucoma patients, but we haven’t seen any published reports yet.

When it comes to angle surgery for uveitic glaucoma patients, pediatric patients are an interesting niche group. Sharon Freedman, MD, and David Walton, MD, have shown that goniotomy can be a useful approach for chronic childhood uveitis. Most of these patients are idiopathic in their diagnosis, but the success rate is reported to be around 75 percent at three years, which is pretty good for a very low-complication procedure.12,13 The age of these patients ranged up to near 20; the average age was 15. So you can use this procedure in teenage uveitic glaucoma patients.

Another option for the pediatric group is MIGS. Many of these surgeries, using tools such as the Trabectome, the Kahook Dual Blade or the Trab 360, also seem to be effective in pediatric uveitic glaucoma patients. So far, we’ve had positive results with these patients and we’re hearing positive anecdotal reports from others about this as well. We’re awaiting publications, which I’m sure will be forthcoming.

Outlook: Good
Today, the prognosis for uveitic glaucoma patients has greatly improved compared to a few years ago. This is at least partly the result of our more aggressive and comprehensive medical control of the uveitis, which often involves the use of immunomodulatory medications. In terms of the elevated pressure, most of these patients are currently treated with glaucoma medications. However, the literature has clearly demonstrated that drainage implants are effective for surgical therapy, and many surgeons now consider this a “go-to” procedure. Goniotomy-related procedures also appear promising in pediatric patients and even adults. Other glaucoma surgical options—including MIGS—may also be effective in these patients, but those approaches are still under evaluation.  REVIEW 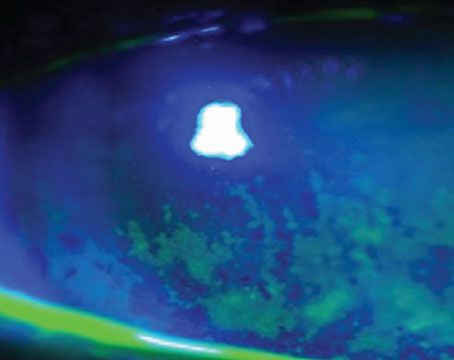 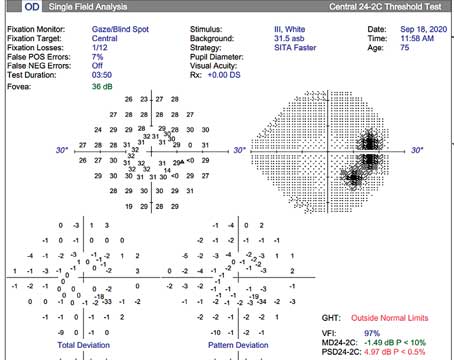