Glaucoma is a progressive disease that must be monitored over time. For years, identifying glaucoma progression relied heavily on clinical assessment of the optic nerve, comparison of disc photos over time and visual field analysis. OCT has given physicians another tool to keep track of patients’ glaucoma, and they can combine its findings with the results of other modalities to try to get a fuller picture of the patient’s disease. Here, glaucoma experts explain how they follow progression in their patients.

According to Richard Lehrer, MD, who is in practice in Canton, Ohio, before visual field testing became popular, ophthalmologists examined the optic nerve and checked the patient’s pressure. “In the 1960s, if a patient’s pressure was less than 21 mmHg, he or she didn’t have glaucoma, and if the pressure was more than 21 mm Hg, he or she had glaucoma,” Dr. Lehrer says. “At that time, people were losing vision, and ophthalmologists didn’t really understand why. Once visual field testing became popular, it became routine standard of care to monitor for progression with visual field testing. Before OCT testing, we would follow all patients with stereo disc photos and disc drawings. We would do them on a regular basis and compare them. Studies have shown that manual optic nerve examination, even by very experienced observers, isn’t as reliable as comparing photographs. It’s not as reliable as OCT testing measuring nerve fiber layer and ganglion cell layer parameters.”

A recent study found that OCT is very sensitive for the detection of progression in early glaucoma (though several of the authors have financial interests in OCT technology).1 The utility of the nerve fiber layer declines in advanced glaucoma, but the ganglion cell complex remains a sensitive progression detector from early to advanced stages, the authors said. The study included 356 glaucoma suspect/preperimetric eyes and 153 perimetric glaucoma eyes that were analyzed every six months for at least four semi-annual follow-up visits. Follow-up length was 54.1 ±16.2 months for glaucoma suspect/preperimetric eyes and 56.7 ±16 months for perimetric glaucoma eyes.

Fourier-domain OCT was used to map the thickness of the peripapillary retinal nerve fiber layer and ganglion cell complex. OCT-based progression detection was defined as a significant negative trend for either nerve fiber layer or ganglion cell complex. Visual field progression was determined if either the event or trend analysis reached significance.

Because glaucoma is a complicated disease, it requires more than one method of following its progression, according to Michael Stiles, MD, who is in practice in Overland Park, Kansas. “We must look at both structure and function,” he says. “We’ve always been under the impression that measurable structural change will precede measurable functional change, but the Ocular Hypertension Treatment Study and other large studies have shown that functional loss can be recognized before structural loss. So, even in the early stages, following both structure and function is important.”

Louis Cantor, MD, who is in practice in Indianapolis, agrees. “There’s no one test that will tell you definitively if a patient is progressing,” he says.

Dr. Cantor says that there are three things to consider when evaluating possible progression: Is it consistent? Is it persistent? And, is it significant?

“First, the progression must be consistently observed on multiple tests,” he says. “It’s challenging to diagnose progression based on one measurement being up one day on any given test. We can’t hang our hat on any one thing in glaucoma, so things have to correlate and be consistent with each other. If something looks worse in a patient’s field, but the pressure is as low as it’s always been, the optic nerve looks the same, and the patient isn’t noticing any changes, then we are less likely to believe that the field is worse. However, if that same patient comes in with a worse field, something on the nerve fiber layer looks worse, the pressure is up, and the patient feels that his or her vision is worse, that all adds up to progression.”

In addition to being consistent, the progression must be persistent, Dr. Cantor says. In other words, measurements need to be repeated to ensure that it’s a persistent finding. “Many times, things look worse, but then when you repeat the measurement, it’s really not worse,” he says. “Sometimes the scan quality of an OCT isn’t perfect, and when we repeat the measurement, what we thought looked worse is no longer there. Anytime we feel that a patient has progressed, we need to confirm that it’s true progression by repeating testing and making sure it’s a persistent finding. If we see the same visual field defect twice or three times in a row, that means something.”

The final consideration is whether the progression is significant. “Many people with glaucoma get a little bit worse with time, but we’re looking for patients who are at highest risk of future functional impairment or what we call loss of vision-related quality of life,” Dr. Cantor says. “What we’re most looking for and what most people are concerned about is patients who demonstrate that they’re getting worse quickly. In a visual field, this means losing 1.5 to 2 decibels of sensitivity per year. These are the patients who are most likely to run into trouble. Patients who are only losing 0.5 decibel per year, even from progressive glaucoma, usually aren’t going to experience any significant functional impairment during their lifetime. Another factor to consider is the patient’s age and life expectancy. A 30-year-old with advanced pigmentary glaucoma who’s getting worse slowly may be in real trouble, whereas an 85-year-old who’s getting worse quickly but with mild glaucoma will probably never run into trouble with functional impairment in his or her lifetime.”

When following glaucoma and making decisions about when to adjust treatments, ophthalmologists consider both structural endpoints and functional endpoints. “Structural changes are a very compelling reason to think about upping your therapy to reduce the pressure more. Ultimately, even when the structural change hasn’t yet caused visual loss, it probably will, but, again, you need to take age and life expectancy into account. Also, other conditions, such as brain tumors, can cause structural changes to the nerve, as well,” Dr. Lehrer says.

Dr. Cantor uses OCT to examine the nerve fiber layer. “I must admit that I often find it difficult to ascertain progression in the nerve fiber layer, particularly in moderate to moderately advanced glaucoma, and certainly in advanced disease because there’s so little nerve fiber layer left to follow,” he says. “Nerve fiber layer and optic nerve parameters are much more sensitive for following progression during the earlier stages of disease, just by nature of our testing and what the optic nerve looks like. When 75 to 80 percent of the nerve is gone, there’s very little left to follow with OCT. We can look at macular parameters and other indicators, but it gets very hard, and we rely more on the visual field. Conversely, the field isn’t very sensitive for early disease and early progression, but is much more sensitive in moderate to moderately advanced and advanced disease. So, the test we use to monitor progression is influenced a great deal by the stage of glaucoma. The patient with early disease can be progressing, and his or her optic nerve is getting worse, but nothing shows up on the field by our current technologies.”

Dr. Lehrer agrees. “It’s important to look at the diagnosis to see if it’s mild, moderate or severe glaucoma and how much damage the patient has,” he says. “Certain things will work better in mild disease, and other things can be better in more severe disease. For instance, if you’re following severe glaucoma with OCTs, they’re not quite as useful because you reach a floor effect where it just doesn’t get any thinner after a while. At that point, fields are a much better way to follow things. Whereas, if you’re looking at mild disease, you may start to see changes sooner in the structural testing like OCT, versus seeing changes on fields and monitoring the disc. I think those are important factors. The other thing that I’ve started doing in extremely mild and ocular-hypertensive patients is photopic negative response (PhNR) and ffERG testing. These may show signs of progression prior to some of the structural changes or visual field changes.”

Dr. Stiles follows glaucoma progression using primarily OCT and visual field. “In visual field testing, the 24-2 testing strategy is typically used, but we’re seeing a higher interest in using 10-2 to pick up more disease closer to fixation,” he says. “In the past, we’ve always been under the impression that pericentral disease only occurs in later stages of glaucoma. But we’re finding in certain glaucomas that the first manifestation of visual field loss is sometimes pericentral visual field defects, so 10-2s are being more commonly incorporated in screening and follow-up.”

A recent study found that both visual function and the optic disc must be monitored with equal diligence, because either may show the first evidence of glaucomatous damage.2 This longitudinal randomized clinical trial included 168 eyes of 152 ocular hypertensive participants aged 40 to 80 years.

Of the 168 eyes, 41 reached an endpoint by both visual function and optic disc criteria; 40 eyes reached only a visual function endpoint, and 87 reached only an optic disc endpoint. Times to reach isolated disc or field endpoints were similar. Visual field endpoints were more likely in eyes that showed the following optic nerve head features: an optic nerve head hemorrhage; thinning of the optic disc rim; or enlargement of the horizontal cup-to-disc ratio. Optic disc endpoints were more likely in eyes that showed some evidence of a nasal step or a partial arcuate visual field defect, or an increase in the pattern standard deviation.

In addition to testing, Dr. Cantor recommends asking patients about glaucoma progression and vision changes. “Many patients are aware that their glaucoma is getting worse,” he says. “Even if the visual field looks the same, the patient may say that his or her vision feels worse. If I can’t find another reason for it, that raises suspicion because patients are usually correct. I don’t know that we listen to patients well or even ask them about their perception of their vision. I now ask every glaucoma patient about his or her vision at every visit. Then, we go from there. I think we leave the patient out a lot and rely too much on testing, when our testing may not be as sensitive as the patient sitting in front of us.”

Artificial intelligence is an exciting new technology. “Trying to standardize what’s truly progression and what’s artifact or inherent anomalies of the optic nerve will be helpful in having a more specific and sensitive diagnosis of glaucoma, as well as following progression,” Dr. Stiles says.

A recent study found that numerous artificial intelligence strategies provide promising levels of specificity and sensitivity for structural and functional test modalities used for the detection of glaucoma.3 Combining structural and functional inputs has been shown to further improve diagnostic ability. Regarding glaucoma progression, artificial intelligence strategies may detect progression earlier than conventional methods, or potentially from a single visual field test, according to the researchers.

The Art of Managing PXF Glaucoma 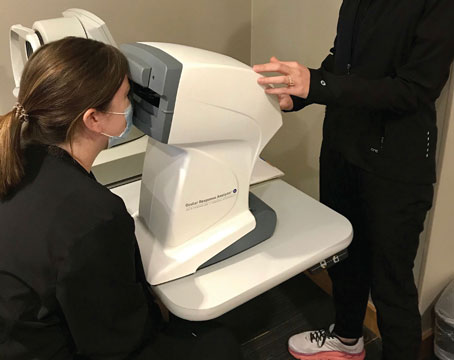