In the August issue of the Journal of Cataract and Refractive Surgery, researchers from California and the United Kingdom combined to quantify the effect of postoperative astigmatism on the uncorrected distance visual acuity of cataract surgery patients. The investigators say this is the first large-sample study with enough statistical power to investigate the independent effect of low amounts of astigmatism in these patients.

In the retrospective case series, the researchers entered postoperative data from 17,152 dominant eyes of patients who had undergone either cataract surgery or refractive lens exchange. They looked at the effect of residual astigmatism on the three-month postop monocular UDVA, as well as patient satisfaction.

The investigators found that, compared with eyes with no residual astigmatism, the odds of not achieving 20/20 vision in eyes with low levels of postop cylinder (0.25 to 0.50 D) increased by 1.7 and 1.9 (p<0.0001) in monofocal and multifocal IOLs, respectively.

The effect of residual astigmatism on satisfaction was more evident at the 0.75 to 1 D level, where the odds of not being satisfied with vision increased by a factor of 2.0 and 1.5 in patients with monofocal and multifocal IOLs, respectively (p<0.0001).

The study’s corresponding author, San Diego’s Steven C. Schallhorn, MD, says a couple of things stood out to him from the data.

“The study showed how even very low levels of astigmatism can affect outcomes,” he says, referring to the odds ratio of nearly 2.0 of not getting 20/20 vision with low astigmatism. “The evolution of our understanding of this is interesting: Twenty or 30 years ago, if you were at 1 D of residual astigmatism or less postoperatively, that was good, especially with extracapsular cataract extraction. We don’t have that acute sense of how important it is to manage astigmatism unless it’s very high—meaning 2 or 3 D or more. [This study showed] that our threshold, our clinical acumen and our understanding of the preop workup of astigmatism need to step up a notch.”

The second take-home point from the study was more surprising, because it dealt with sphere in postop visual acuity and intraocular lens selection, rather than simply astigmatism.

“In an analysis that was done looking at the role of sphere, the interesting part is that we as surgeons have a tendency to select an IOL on the myopic side of things,” he notes. “In other words, if we have a choice, we often straddle zero on the myopic side. For instance, if you have to decide if you want to implant a 20-D lens that’ll make the patient +0.20 or a 20.5-D lens that’ll make him -0.34, there’s a tendency to choose the lens that leaves the patient on the minus side (of course, this is for an eye in which you want to hit emmetropia). So, we tend to select the lens that straddles zero on the minus side. This study, however, showed that, in those types of situations, you’re definitely better off on the hyperopic side than the myopic.”

“This was a very unique, interesting finding,” Dr. Schallhorn says. “It’s kind of understandable if you’re putting in a MF lens, because they have near adds that the patients can work through. If you’re myopic, distance is blurred no matter what. You have too much optical power. That’s a factor, and also applies for monofocals. And the refraction is in minus cylinder, so any residual astigmatism will come into play also.”

Researchers from Taiwan say that blue-light-filtering IOLs may not offer any tangible benefit over non-filtering IOLs in reducing patients’ risk for AMD development.1

The cohort study included 186,591 patients who had bilateral cataract surgery between 2008 and 2013 and were followed for up to 10 years. Of these patients, 11.3 percent had BF-IOL implants, while the remaining 88.7 percent got conventional IOLs.

Once baseline characteristics were adjusted between the groups, the lack of evidence supporting the photoprotective benefits of BF-IOLs became clear, the researchers say.

Premium IOLs in the Pipeline 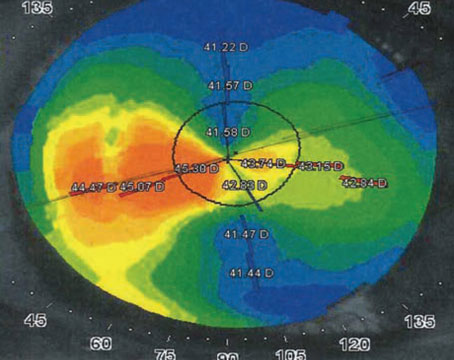