When LASIK began wowing patients and doctors with its virtually painless recovery and quick return to good vision, ophthalmology began administering the last rites to surface ablation procedures. Then surgeons became acutely aware of postop-LASIK ectasia, and rumors of surface ablation’s demise turned out to be greatly exaggerated. Surgeons learned to appreciate the procedure’s safety profile in risky patients, and how well it could be paired with judicious use of mitomycin-C. Here, surgeons share their tips for managing surface ablation patients.


Taming the Pain
Despite offering good outcomes, one of surface ablation’s main drawbacks is the pain it induces. Though no one’s been able to completely eliminate postop pain from the PRK experience, surgeons have done their best to deaden it and help patients deal with it. 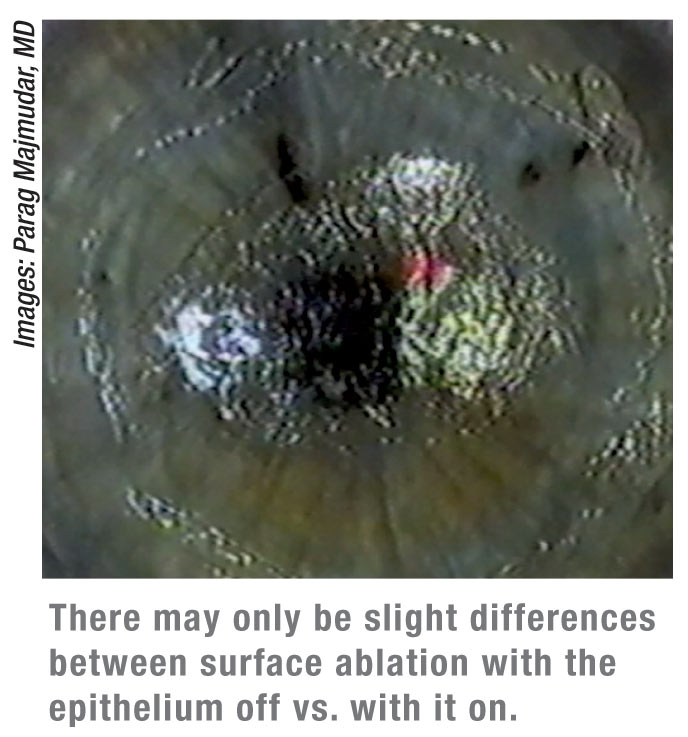 Ottawa surgeon Bruce Jackson says he’s tried a variety of pharmaceuticals as they came into vogue, but wound up scaling back to a relatively straightforward Regimen. “We use copious amounts of cold BSS just prior to surgery for irrigation,” he says. “After surgery, we use Tylenol 3 [with codeine] and make up some comfort drops for the patient to use. The comfort drops are dilute tetracaine mixed with artificial tears that the patient can administer every couple of hours as needed. The patient also uses a non-steroidal anti-inflammatory drop for 24 hours, topical steroids and a fourth-generation fluoroquinolone. We went through all the various medications that were being used at  different times, such as gabapentin, pregabalin and systemic steroids but didn’t find that any of them made much of a difference in our practice’s patients. The majority of our patients have minimal discomfort now and the bandage contact lens is usually off by day five.

“The other trick we use is to coach patients to use cold compresses,” Dr. Jackson adds. “Also, it helps if they put their drops in the fridge between uses, and use an artificial tear over the contact lens, if necessary. We’ve found that cold compresses, cool drops and keeping the surface moist with artificial tears really helps. Patients should also try to remember to open their eyes slowly in the morning, rather than pop them open quickly, because they’ll often get more discomfort with the contact lens upon opening their eyes after sleeping.” If the patient is sensitive to codeine and therefore can’t tolerate the Tylenol 3, Dr. Jackson will substitute Demerol 50 mgb. i.d./t.i.d. “If we use Demerol, the patient may get nauseous, so we may also prescribe a little Phenergan 25 mg to prevent that, but the majority don’t need it,” he says.

Chicago surgeon Parag Majmudar, who uses surface ablation for certain cases in which LASIK would be contraindicated, says he’s added a couple wrinkles to his pain management plan. He thinks pregabalin (Lyrica, Pfizer), a drug usually used for neuropathic pain, is worthwhile. “My patients start Lyrica the day of the procedure b.i.d., and continue it for four days,” he says. “There have been abstracts on it, some of which say it helps, some others saying it doesn’t, but I’ve found it probably does take the edge off. Patients seem to be reasonably well-tolerant of the medication. Patients taking it aren’t really good to drive, but they usually won’t be driving or operating heavy machinery immediately after the procedure anyway. The biggest side effect is a little drowsiness, which is fine if the drug helps them get through the procedure’s discomfort.

“At the end of the procedure, I’ll instill a drop of a longer-acting cycloplegic such as homatropine or scopolamine,” continues Dr. Majmudar. “I feel that, when the patients are dilated, the cycloplegic helps reduce the ciliary spasm that contributes to a lot of their pain. It doesn’t do anything for nerve pain from the cornea, but it helps reduce the ciliary spasm and make patients a little more comfortable in that way. Just one drop will last 48 to 72 hours, and you don’t have to worry about it affecting vision too much because by the time the patient re-epithelializes, the effect has worn off. I haven’t done any controlled studies of it, but I think it helps a lot.” Dr. Majmudar also takes steps to minimize any adverse effects of strong analgesics. “I let patients know they can use something like Tylenol 3 or Vicodin, but sometimes these medications bring side effects, and can be addictive,” he says. “To help minimize these problems, I say that they can take them every six hours and take a Motrin or Aleve every three hours—but not regular Tylenol because I don’t want them taking too much acetaminophen.”

In the vein of indirectly managing pain, Clare, Mich., ophthalmologist Thomas Claringbold thinks keeping the corneal surface healthy helps keep his patients a bit more comfortable, so he has begun prescribing Restasis for certain patients. “If the patient’s a female over 40 or I have a sense that a patient is dry, I’ll usually put her on Restasis,” he says. “It seems to help, especially during that first postop week. I will put the patient on it as soon as I’ve talked to him about having the refractive surgery. If there’s a one- or two-month window to get him started on it, then that’s great because of how long it takes to get its full effect. Then, I’ll try to keep him on it for maybe an additional three or four months afterward, especially if he’s really dry. If the dryness is minor then I’ll stop it after about a month.” Dr. Claringbold also credits Chicago surgeon Bruce Larson for tipping him off on the benefits of using chilled BSS to help deaden the pain. He says he uses about 50 drops of almost frozen BSS during the procedure.

Dr. Claringbold says that, if you use an alcohol debridement technique, be especially careful with patients who have a lot of astigmatism. “When I use alcohol to loosen the epithelium, if any of it leaks out of the alcohol well, such as in a patient with a lot of cylinder, those are the individuals who have a little more discomfort that first night,” he says. “You have to press the alcohol well very firmly to get a good seal if a cornea has a lot of astigmatism because of its shape. In cases where some alcohol may leak out, I make sure that I soak up the alcohol completely and rinse really well with the chilled BSS.”

A minor debate has smoldered in surface ablation circles regarding the merits of keeping the epithelium vs. discarding it.

“I put the epithelium back on,” avers Dr. Claringbold. “I think John Marshall and others have shown some interesting findings that, at the very least, it provides a tissue bandage and helps with the pain. As far as healing faster though, studies haven’t shown much of a huge difference one way or the other. I’m mostly using it as a protective mechanism.”

Dr. Jackson, though, doesn’t think replacing the epithelium is very helpful. “We did a study in our practice early on when evaluating the various techniques,” he says. “But, in the end, we didn’t see much of a difference in epithelial technique. We found that patients with PRK with epithelial removal, or flap-off, had some more discomfort on days one and two, but by days three and four they were more comfortable. However, in patients in whom the flap was left on, they were more comfortable on days one and two but then by days three and four were actually more uncomfortable. In the epi-on group, they were probably more uncomfortable on days three and four because there was a small epithelial defect that the flap was healing in, whereas the first group tended to have faster epithelial healing with the flap off.”
Show more on: REFRACTIVE SURGERY 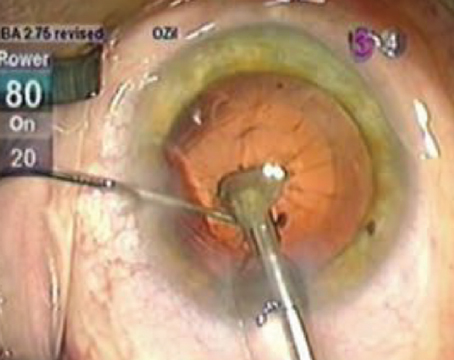 Treating Astigmatism: How Low Can You Go?