In the world of entertainment, sometimes an actor can become successful but then fade into obscurity, only to make a strong comeback years later in an entirely different role. Radial keratotomy followed this arc, rising to prominence in the 1980s and 1990s, then falling out of favor as laser vision correction took hold. In my practice, RK has made this sort of comeback, though as a supporting player, not the star. The RK I use is minimal, and is primarily aimed at treating the “20/Unhappy” postop premium intraocular lens patient. I like RK for this purpose because it’s quick, has a short recovery time, doesn’t disturb the tear film, and doesn’t involve the expense and other postop issues that accompany LASIK or PRK. Here’s a look at my approach.


Reconsidering RK
Though presbyopic lenses—both diffractive multifocals and the Crystalens—can provide good visual results for a lot of patients, in every cataract practice there are still those patients whose vision will be slightly off after premium lens surgery, leaving them unhappy as a result. Richard Lindstrom, MD, and Guy Kezirian, MD, have both said that, after studying outcomes of refractive cataract surgery with all lenses, it doesn’t matter what lens you use—the real secret is getting the refraction under 0.5 D of sphere and 0.5 D of cylinder. Then, the patient will have a fuller range of vision. I think to be successful with premium channel lenses in a practice, you have to get your patients into this “50/50” group. For these patients who need a small tweak to get them seeing more sharply, I use minimally invasive radial incisions, formerly known as mini-RK.

The other choices for these low postop errors are mainly piggyback lenses or the use of laser vision correction. I don’t like the lens option because it involves a whole other intraocular procedure that you can’t do bilaterally at one sitting. And LASIK, though accurate, isn’t always perfect. In a presentation at the 2011 Aspen Invitational Refractive Symposium, Dr. Kezirian reported that, out of thousands of surgeries, 34 percent of patients who had laser vision correction to enhance their vision post-presbyopic lens surgery were still not emmetropic. Also, the laser can be expensive to use, and many surgeons simply don’t have access to one. And the healing factor of laser surgery may make it difficult to accurately treat the small corrections we’re going after in these post-premium lens patients, which are usually below a diopter. RK also doesn’t involve any of the issues associated with laser surgery, such as neurotrophic corneas and delayed wound healing.

Another factor that makes the laser unappealing in these small postop corrections is the patient experience: Undergoing a LASIK or PRK truly feels like a full-on surgical procedure, which can be daunting for a lot of people. Some may even doubt that you did your job right the first time with the lens surgery.

I understand that there may be a bias against RK, based on the adverse events associated with very aggressive RK procedures of the past. However, the complications associated with RK, such as glare, halos and unstable corneas, resulted from too much RK being done and cutting with small optical zones. My approach only uses two incisions and doesn’t go smaller than a 4-mm optical zone, which I feel promotes a stable result. In fact, in the Prospective Evaluation of Radial Keratotomy study in the 1990s, the researchers found that such incisions were generally stable.1 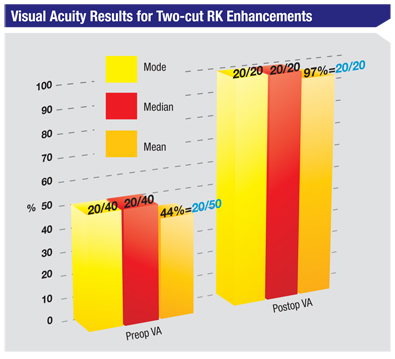 My Surgical Approach
When a patient is undergoing any kind of presbyopic/premium lens surgery, including blended vision/monovision and toric IOL implantation, I let him know at the outset that there’s the possibility he’ll need a postop “tweak” to get the best possible vision. I build the cost of this into the procedure fee. If it’s necessary, the mini-RK procedure then proceeds as follows:

We usually wait until six weeks to two months after the lens surgery. The residual refractive error in these patients is usually between 1 and 1.75 D. On a day we set aside for these patients, we lie the patient down in the minor surgery room and instill a drop of Alphagan, which brings the pupil down. We then instill proparacaine, and some patients also get 5 mg of oral valium.

Using ultrasonic pachymetry, I measure corneal thickness at the 4-mm optical zone where both cuts will end. If the patient also has some astigmatism of a diopter or less, I’ll plan to place my radials on the positive astigmatic axis, so I’ll measure the corneal depth there. I then set my diamond blade at 100 percent of the pachymetry measurement. I’ve found that by setting it to 100 percent I usually get an actual cut depth between 80 and 90 percent. If I’m operating on the astigmatic axis, I’ll use a Mendez marker to mark it. To mark the incision sites, I developed the McDonald two-incision marker with Storz Instruments, though I have no financial interest in it.

I’m now ready to make my incisions. The nomogram is conservative: The 4-mm zone treats 1.75 D of sphere (and 1 D of astigmatism when cut on-axis); the 4.5-mm zone treats 1.5 D (and 0.75 D of astigmatism); and the 5-mm zone treats up to 1 D (and 0.5 D of astigmatism). If the patient is over 70, I’ll add 0.5 D, and if he’s younger than 50 I’ll subtract 0.5 D. I complete the incisions at the 8-mm optical zone, though I’ll sometimes take them to the 9-mm zone to get a bit more effect. The patient gets antibiotic and steroid drops for a week. You can also add in a fluoroquinolone.

It’s worth noting that Wilkes-Barre, Pa., surgeon Frank Bucci has an incisional approach for these patients that’s somewhat similar, but with a few key differences: He only uses the 5-mm zone and follows the radial incisions with astigmatic keratotomy. I’ve found the AK isn’t necessary since I can pick up the astigmatism by operating on-axis and varying my optical zone.

To give an idea of the results I achieve with these mini-RK touch-ups, I performed a study of 16 cases. The average preop spherical equivalent refractive error for the group was -0.84 D, and their average uncorrected vision was 20/50. At a follow-up of one to three months, the two-incision RK had reduced the average SE error to -0.06, and all of the patients saw 20/20.

There are two main reasons why the mini-RK works: First, even though the incisions are small and there are only two of them, the average premium lens patient in my practice is at least 60 years old. Therefore, these corneas are less elastic and yield larger amounts of correction with even minimal incisions. Second, there are no visual complaints because the older person’s pupil doesn’t dilate as widely as it did when he was young. One Japanese study found that at age 60, the mean pupil size at near is less than 3 mm.2

As my results show, a mini-RK can be a patient-friendly way to clean up small postop refractive errors. I urge surgeons to think outside of the box and, instead of categorically condemning RK, give it a try in these patients. It’s cheaper than using a laser and involves less follow-up, and it also produces great outcomes.