For students of the history of science, the story of histamine (a.k.a., 4-imidazole ethyl amine) including its discovery, isolation, characterization and therapeutic manipulation, presents a microcosm of 20th-century medicine.1 As a key factor in diverse physiological processes such as gastric acid secretion, smooth muscle modulation and inflammation, the intense interest in this simple molecule’s role isn’t surprising. Carl Dragstedt, MD, PhD, who is credited with identifying histamine’s role in anaphylaxis,2 actually penned an homage to the subject of his life’s work in 1947, a poem that portrayed histamine in an entirely negative light, referring to it with such lines as, “Trauma, burns, and inflammation,/Headache, pain, and constipation/Show the fingerprints of some malicious fiend.”2 (See “Histamine,” facing page.) This uncomplimentary assessment is borne out by consideration of the current histaminergic pharmacopeia: more than 40 drugs, and every one of them is an anti-histamine.3,4

But it’s the 21th century now, and we certainly have a much clearer picture of histamine physiology and pathophysiology than Dr. Dragstedt could have imagined. A key part of the picture that has emerged in the past decade is the potential importance of the newest members of the histamine receptor family, the H4 histamine receptors.5 What role, if any, does this new receptor group play in ocular allergy? As we have learned more about this facet of histamine biology, it’s become apparent that therapies designed to treat immune disorders such as allergic conjunctivitis may have to take into account the role played by H4 receptor signaling. 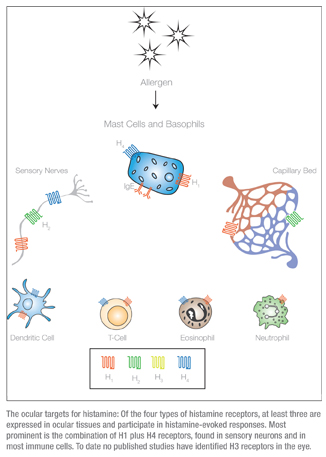 The Histamine Receptor Family
Like the other three histamine receptor types, H4 receptors are G-protein coupled receptors.6,7 This means that they function in a cycle of guanosine triphosphate hydrolysis. Each histamine receptor associates with a specific G protein that has some form of guanosine phosphate bound to it. The GTP form is most often associated with an activated receptor, but this GTP is converted to an inactive diphosphate, or GDP, which then dissociates and is replaced by a new GTP. What’s interesting about this cycle from the standpoint of histamine pharmacology is that most receptors have an inherent rate of hydrolysis, a sort of “idle speed”; histamine binding will increase that speed, and in so doing will increase the gain of the downstream effector activity. Some antagonists can simply lock the receptor at idle and prevent histamine activation or, depending on the nature of the drug-receptor interaction, can stop the cycle altogether. These drugs are referred to as inverse agonists,6 and their effects can be dramatically different from those that freeze the receptors at idle. An enhanced understanding of the subtleties of G-protein signaling is critical to understanding how antihistamine therapy can be fine-tuned to treat allergy.

While all histamine receptors share the G-protein signaling modality, there are several important features that distinguish them from each other. These include the specifics of their interaction with ligands (including histamine), their G-protein partners, and their patterns of expression throughout the body. One of the first goals of researchers who clone a receptor is to investigate the pharmacological profile of their new find in the hopes of identifying one or more high-affinity ligands. Selective agonist and antagonists have been the primary tool in efforts to understand both what each receptor family member does and how it does it.7

The H1 receptors are ubiquitous in their distribution, and elicit cellular responses via mobilization of intracellular calcium.8 Activation of the H1 receptors is central in immune and inflammatory responses, and they are also important regulators of vascular smooth muscle, where they cause vasodilation, and bronchial smooth muscle, in which they cause vasoconstriction. In the eye, they have a significant impact on sensory signaling9 and a modest effect on vascular activity.

The second class of histamine receptors, H2, is found in the gastrointestinal mucosa and, to a lesser extent, in neurons and vascular smooth muscle.10 In contrast to H1 receptors, the H2 receptors in the eye are localized almost exclusively in association with blood vessels, and so have a greater impact on the redness rather than the itching associated with conjunctivitis.11 If the H2 is the gut histamine receptor then H3 is the brain receptor, since it’s expressed throughout the central nervous system, where it acts primarily to modulate the function of other signaling molecules such as GABA, serotonin and dopamine.12 Despite this primary role in the central nervous system, H3 receptors have also been found in the nasal mucosa and so, like H1 and H2 receptors, may play a role in histamine-mediated nasal inflammation or rhino-conjunctivitis.13

The fourth member of the family was first identified as part of the Human Genome Project and was subsequently cloned and expressed by multiple groups around 2000.14 Based on an initial assessment of distribution, the H4 receptor was referred to as the histamine receptor of the hematopoietic system. It is expressed primarily in immune cells (mast cells, leukocytes) and is involved in physiologic functions related to inflammation and allergy. Some T cells, including CD4+ T cells, also express functional H4-receptors,15 and a number of studies have demonstrated a role for H4-receptors in cell chemotaxis and cytokine production (e.g., IL-4 and ifn-γ) in the course of an inflammatory event.16

As shown in the graphic on p. 68, it’s becoming apparent that, in tissues impacting ocular allergic disease, H4 receptors are co-localized with H1 receptors. Collectively, these observations suggest that H4 receptors may be as important as the H1 receptors in the pathophysiology of allergic conditions such as conjunctivitis.17


Integrating Histamine Signaling
The significant overlap in tissue expression for each of the four receptors means that the physiological response to histamine is an integrated response. How does this impact therapy with agents designed to be specific for one receptor class? Consider the case of neurons that innervate the ocular conjunctiva. Co-expression of H1 and H4 means that the signaling mediated by histamine in these tissues is an integrated response to H1 plus H4 activation. The two keys to understanding the output of histamine stimulation in these cell types are the relative expression and the relative affinity of each receptor. While the data on expression levels is incomplete, it seems that the H4 receptors are a lower abundance, higher sensitivity pathway. Several in vitro studies have established that H4 receptors have a much higher affinity for histamine than any of the other receptors.17 This means that at low histamine concentration (no more than 5 to 10 nM), the H4 receptors’ signaling pathway will dominate the integrated histamine response. As the histamine concentration rises, more H1 receptors will be activated, and eventually the greater number of H1 receptors will become the primary effectors of the histamine response.

This expression of multiple receptors for the same compound in one tissue creates significant obstacles to the task of teasing apart the roles played by each. One study used a mouse model to test the relative contributions of histamine receptor subtypes in pruritus.18 Both histamine and a selective H4 agonist elicited scratching responses in the model. While several H1 antagonists show some ability to block the scratch response, the study’s investigators found that an H4 antagonist (JNJ-7777120, Johnson & Johnson) blocked it to a much greater extent. Antagonists for H2 and H3 receptors had no effect. Similar studies with H4 receptor gene-knockout mice supported the idea that pruritus was mediated primarily by an H4 pathway, with additional contribution by H1 receptors. This same report also tested a mouse strain that lacks mast cells in order to show that the itch response was primarily mediated via histamine activation of sensory neurons.

Another approach to this question of overlapping expression is to test the ability of traditional H1 antagonists to interact with the H4 receptor. A study from the laboratory of Roland Seifert, MD, PhD, at the University of Regensburg in Germany, used an acute murine asthma model to confirm synergistic inhibition of bronchiolar eosinophil accumulation using the combination of mepyramine and JNJ-7777120.19 Dr. Seifert’s group also tested H4 receptors in vitro for their sensitivity to a panel of H1 drugs. While there was some minimal overlap between the different receptors and their drugs, none was as effective at blocking H4 activity as JNJ-7777120. In another animal study, the combination of levocabastine and JNJ-7777120 also demonstrated synergism in alleviating signs and symptoms of histamine-evoked conjunctivitis.20

The paired expression of H1 and H4 histamine receptors in three separate models of allergic disease confirms the importance of a combination or broad-spectrum approach to new treatments.


H4 Antihistamines
Our knowledge of H4 receptor physiology depends heavily on the availability of the specific antagonist JNJ-7777120, so it was surprising to see a report early this year showing that the drug may modulate some G-protein signaling independent of its action at H4 receptors.21 While it clearly antagonizes H4 signaling, this secondary effect of JNJ-7777120 underscores a need for more H4-specific drugs. Preclinical and clinical studies have yielded a number of candidate compounds for therapies,22,23 and several H4-specific compounds,  UR-65318 and UR-65325 (Palau Pharma)25 have completed Phase I or Phase II trials for allergic rhinitis or atopic dermatitis. And while there are no H4-targeted compounds currently in development for ocular allergy, a newly approved compound, Lastacaft, (alcaftadine 0.25% ophthalmic solution; Allergan)26 has demonstrated H4 antagonism in vitro. Originally developed as an H1 antihistamine, preclinical studies showed the alcaftadine also exhibited H2 and H4 receptor antagonism. (Gallois-Bernos AC, et al. IOVS 2011;52:ARVO E-Abstract 6426) The most remarkable clinical feature of alcaftadine is its long duration of action, and it’s possible that this particular effect may be due to antagonism at multiple histamine receptors. The relative importance of each of these antagonistic attributes in the overall clinical profile for this drug is still to be determined.

One common theme in drug development is the idealized goal of “absolute specificity.” In absolute specificity, a drug that interacts with a single target at high affinity will yield a therapy with the highest efficacy while also inducing the fewest adverse effects. Interestingly, as we learn more about the nature of histamine signaling, it appears that the ideal antihistamine agent might actually be one with the ability to interact with multiple receptors in the body; in fact it may be that optimal antihistamine therapy for allergies such as allergic conjunctivitis will require a combination of two or more receptor-specific antihistamines.

‘Resolving’ the Effects Of Fish Oil on the Eye

After three millennia of battling the discomfort and irritation of dry eye, is ophthalmology any closer to a solution? Read More
Therapeutics/External Disease

A Close Look at Pseudoexfoliation

This disease is linked to vision loss, hearing loss and cataract. Learning more about it may help lead to better treatments. Read More
Therapeutics/External Disease

A Guide for Breaking Down Blepharitis

An attempt to nail down a diagnosis and treatment for a disease that defies clean definitions. Read More
Therapeutics/External Disease

A Partial Solution to Steroid Side Effects

A look at how steroids work, and how we may be able to create one that poses less of a risk for adverse effects. Read More
Therapeutics/External Disease

A look at what a patient's blink tells us about dry eye, visual acuity and even general fatigue. Read More

VKC and the Allergy Rogues Gallery