It’s amazing to think of how complicated a seemingly simple action can be. The “blink of an eye” is an often-used phrase to describe things that begin and end before we have time to even realize they’re happening. And blinking, the autonomic, reflexive closing of the eye is one of those apparently simple actions that, upon closer inspection, is exceedingly complex. It’s also an absolutely critical aspect of corneal and conjunctival defense against allergens, pollutants and environmental poisons. Closer analysis of the blink, including a consideration of the newest research into blink physiology and pathophysiology, provides revealing insights into current and future therapies for allergy, dry-eye disease and other disorders of the ocular surface.

Control of blinking is mediated by an integration of autonomic and voluntary neural control. Motor nerves in the upper and lower eyelids, innervated by the VII and III cranial nerves, trigger the contraction of the orbicularis oculi and levator palpebrae muscles.1 Lid closure occurs spontaneously, by reflex or by voluntary muscular contraction. Central control of spontaneous blink is thought to be regulated by activity of the caudate2 and several studies have implicated dopaminergic pathways in this control.3 Cognitive processes have a substantial impact on blink rate as well, with more active, mentally taxing activities such as memorization or mathematical computation being associated with an increase in blink rate.4 Low blink rates, by contrast, are associated with two distinct physiological states: inattentiveness (or daydreaming) and stimulus tracking, a state of heightened attentiveness in which gaze is fixed on a specific object.2

Reflex blinks occur in response to any corneal stimulus, and as such represent the classic example of how blink serves as the first line of ocular protection.5 The wiper action of the lid can remove dust, pollens or other foreign debris and the physical action of blinking stimulates secretion of mucin and meibum, key components of the tear film that coats the corneal surface.6


Factors That Alter Blink
There are a number of factors that can alter blink rate and have a profound impact on the ocular surface. Blink rates may change depending on the activity being completed. A resting blink rate is estimated to be between eight and 21 blinks per minute, but it’s believed that blink rate increases when engaged in conversation, averaging 10.5 to 32.5 blinks per minute (or 19 to 26 blinks per minute according to another estimate).7,8 When focusing on a specific visual task, blink rate is likely to drop. The rate of blinking when reading has been shown to decrease to an average of 4.5 blinks per minute, and people are more likely to blink during line changes.8 Blink frequency has also been shown to change during modifications in gaze direction and while squinting.9,10,11 Furthermore, since the advent of personal computers 30 years ago, a condition known as computer vision syndrome has surfaced. One of the most significant problems contributing to CVS is the reduction in a patient’s blink rate.12,13 Studies show that individuals blink approximately 60 percent less when using a computer.14 This decrease in blink rate may be a result of serious concentration on the task at hand, or a relatively limited range of eye movement. Consequently, the patient’s tear film is replenished less frequently and evaporates more quickly, causing him ocular discomfort. 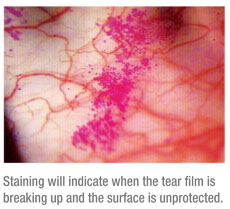 Blink rate is also highly influenced by internal factors such as fatigue, stress medications, emotions and surface conditions. While the impact of mental processes and the course of action controlling blink rate are still under investigation, it appears that blink rate may be altered by cognitive and emotional function.15 For example, people who experience emotional excitement, anxiety or frustration have an increased blink rate; feelings of guilt have also been reported to affect normal blink patterns.16 Research has also indicated that increased blink rate brought on by fatigue parallels a decline in task performance.17,18

Diseases associated with abnormal dopamine levels have been found to alter blink rate, as dopamine levels in the central nervous system are believed to be associated with the motor movements that control blinking.2 Patients with Parkinson’s disease have shown decreased blink rates, while patients with schizophrenia exhibit increased rates.19 Medications also have the ability to affect blink rate. Women on a birth-control pill blink an average of 32 percent more than those not on the pill.20 Although the blink normally does not garner much conscious thought, it’s evident that exogenous and endogenous influences clearly alter the way we blink.


Blink and Visual Function
Performing certain tasks that normally involve a protracted interblink interval can cause some problems for patients with ocular surface dysfunction. Ocular surface dryness and irritation can be exacerbated by these types of activities because of their association with a lower blink rate. For example, a prolonged visual task like working on a computer is associated with a prolongation of the interblink interval to as long as 12 seconds. For a dry-eye patient with a tear-film breakup time of three seconds, such long intervals are likely to lead to ocular discomfort. As the minutes tick by, ocular surface conditions can worsen, and keratitis may increase as a result of these successive, extended interblink intervals. 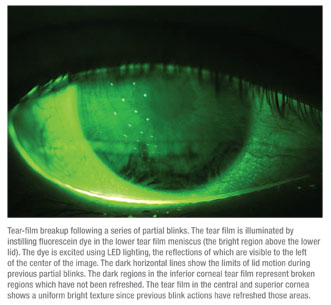 In terms of the interblink interval, it can often be difficult to measure a decrease in visual acuity. To counteract this, a test validated by researchers here at Ora was specifically developed to provide an accurate measure of visual function. The interblink interval visual acuity decay (IVAD) test provides a necessary measurement of visual function shown in real time. (Walker PM et al. IOVS 2007;48: ARVO E-Abstract 422) A computer-based system presents the optotype Landolt C at the patient’s best-corrected visual acuity, and then visual acuity decay results are measured in milliseconds. The patients are instructed to track the orientation of the C by pressing a button on a keypad. During the patient’s interblink interval, his BCVA declines as the size of the stimuli decreases. (Visual function indisputably includes more than static visual acuity.) All in all, the capability of measuring visual acuity over time, in real time, is vital to obtaining precise information on everyday visual task performance.

If a patient’s tear-film breakup is early, their blink is late, and there is a significant time between blinks, then preserving his best-corrected acuity during the interblink interval is improbable. In this instance, an interval of decreased vision occurs. (Walker P, et al. IOVS 2007;48:ARVO E-Abstract 422)

In a study that investigated the relationship between central corneal staining and visual function in dry-eye patients using IVAD measurements to assess functional visual acuity in real time, resulting data demonstrated that patients with central corneal staining couldn’t maintain their best-corrected acuity for as much time in between blinks as patients who didn’t have central staining. (Ousler III G, et al. IOVS 2007;48:ARVO E-Abstract 410)


Diagnosing Disease
The physical act of blinking the eyelid is truly the first line of defense in a majority of anterior segment diseases, and the lid also plays a crucial role in diseases such as allergic conjunctivitis. While it’s long been documented that the best treatment for allergies is avoidance, that’s simply not feasible for most people. The ocular surface is unique in that it is constantly exposed to allergens, with the exception of the time spent blinking. What this means is that during peak allergy season your ocular surface is a depository for allergens throughout the day. In fact, higher levels of chemosis and lid swelling due to constant allergen exposure have been observed in environmental studies at times of peak allergens. Additionally, in urban areas where traditional allergens (plant, tree, grass) may not be as prevalent, there is an even higher cause for concern due to the constant, prolonged attacks from pollen. Air pollution, in particular diesel exhaust particles, exacerbates allergies through reaction with low-level ozone to produce reactive oxygen species which degrade cell membranes and heighten the allergenicity of pollen grains.21,22 These are all crucial elements to consider when prescribing, as medications that are taken as a preventive vs. as a treatment will allow for a greater level of protection during peak season.

Blinks can also be a telling factor in determining a patient’s diagnosis, specifically concerning meibomian gland dysfunction. The physical act of blinking allows lipids produced by the meibomian glands to be expressed and then distributed over the ocular surface. Therefore, when a patient has a lower blink rate, there are fewer opportunities for that distribution. Measuring blinks in various ways in patients suffering from MGD is necessary in order to achieve a definitive diagnosis.

One recent, single-center study utilized blink as a diagnostic tool in order to differentiate 14 subjects into two groups: normals and patients with MGD. (Welch D, et al. IOVS 2011;52:ARVO E-Abstract 946) Among the other scales evaluated in the study, researches calculated blink patterns. The proportion of full blinks was significantly greater in MGD subjects than normals (p=0.044), indicating that MGD patients may alter blink patterns to include more complete blinks and squeeze blinks to help compensate for poor meibum secretions. It’s possible that the act of lid contact occurring with a complete blink better facilitates excretion of meibum from the glands and subsequent uptake into the tear film.

Realizing that all blinks are not created equal is especially important when considering diagnostic assessments of tear-film stability. These changes in blink patterns can contribute to ocular surface exposure and associated inflammation and discomfort. As mentioned earlier, our blink rate is significantly altered during particular cognitive states and visual tasks.

Throughout the course of a day, dry-eye subjects have variable blink patterns that will switch between patterns of compensation (periods of rapid blinks) and non-compensation (periods when the blink rate slows). Under these two blink pattern states, tear-film stability remains largely the same, but the blink pattern is the driving factor in determining the extent of corneal exposure and subsequent inflammation. Recent studies on new dry-eye therapies have demonstrated normalization of rapid blink patterns in these dry-eye patients. (Contractor M, et al. IOVS 2011;52:ARVO E-Abstract 963; Griffin J, et al. IOVS 2011;52:ARVO E-Abstract 980) By significantly lengthening the interblink interval while simultaneously increasing tear-film breakup time, it is hoped that these patients will experience reduced fatigue at the end of the day and can be helped during strenuous visual tasks.

During a busy ophthalmology clinic day, it’s important to keep in mind that while blinking is an aspect of ocular function that’s easy to overlook, it can actually be a revealing sign of a patient’s overall ocular health. Careful observation and documentation of blink biology is a crucial step in understanding, treating and preventing diseases such as ocular allergy and dry eye. Continuing research in this therapeutic area is essential, and it’s clear that we have a lot to learn about blinks.

‘Resolving’ the Effects Of Fish Oil on the Eye

After three millennia of battling the discomfort and irritation of dry eye, is ophthalmology any closer to a solution? Read More
Therapeutics/External Disease

A Close Look at Pseudoexfoliation

This disease is linked to vision loss, hearing loss and cataract. Learning more about it may help lead to better treatments. Read More
Therapeutics/External Disease

A Guide for Breaking Down Blepharitis

An attempt to nail down a diagnosis and treatment for a disease that defies clean definitions. Read More
Therapeutics/External Disease

A Partial Solution to Steroid Side Effects

A look at how steroids work, and how we may be able to create one that poses less of a risk for adverse effects. Read More
Therapeutics/External Disease

A look at what a patient's blink tells us about dry eye, visual acuity and even general fatigue. Read More

Caring for the Eye’s Gatekeepers