Almost as long as we have known about our genetic makeup, scientists have dreamed of harnessing the power of gene expression to treat human disease.1 It has taken many years to realize those dreams, however the past 10 years have led to some very promising advances.2 Gene therapy, in its current form, employs the host’s gene expression machinery to transcribe and translate therapeutic genetic information that has been delivered to target cells through the use of genetically modified viral vectors. One challenge of gene therapy has been our ability to design vectors able to introduce the therapeutic genes into host cells and achieve long-term gene expression without local toxicity or immune reaction.3

The eye represents a unique target organ for gene therapy due to the immune privilege afforded by the blood-ocular barrier, the ability to directly visualize, access and locally treat the target tissue and, with regards to clinical trials, the simultaneous control provided by the other eye. Perhaps it is not surprising, then, that one of the most publicized advances in the field in the last decade was a series of trials for Leber’s congenital amaurosis type 2 (LCA2).4-6 These pivotal trials paved the road for a number of other early clinical trials for retinal disease and the first Phase III study for gene therapy involving the eye. A full review of gene therapy techniques and preclinical research is beyond the scope of this article, and we would refer the reader to additional references.2,7 In this brief review we would like to provide a broad overview of current avenues of research, focusing on those in or near clinical trials.

From the beginning, the idea of targeting inherited retinal degenerations has been tantalizing. It is simple in theory to imagine how, in diseases where the gene defect is known, the wild-type gene could be introduced with a viral vector and the functional gene product would restore function and/or prevent cell death. However, translating the theory into reality depends at least upon: a) the causative gene being known; b) the therapeutic gene being cloned into a viral vector; c) the vector being safe and able to transduce the appropriate cells; d) a sufficient potential patient pool to attract pharmaceutical support; and e) the underlying diseased retina having the potential for restoration of function with gene replacement and not being irreparably diseased.

Leber’s congenital amaurosis is a heterogeneous group of autosomal recessive diseases characterized by early-onset rod-cone dystrophy and severe vision loss. There are a variety of genes that produce the LCA phenotype of varying severity, but certain defects in RPE65 produce LCA2 with early-onset blindness but delayed photoreceptor degeneration. This led investigators to hypothesize that restoration of function of RPE65, which is involved in photoreceptor cell cycling, might prevent progression of degeneration and may allow restoration of visual function.3

After encouraging preclinical animal studies, approval was obtained for human trials in 2008, and three separate Phase I trials demonstrated the safety and efficacy of RPE65 delivered via an adeno-associated virus vector by subretinal injection, with functional improvement beyond two years.4-6,8 There are several ongoing Phase I, II and III studies in the United States and Europe for LCA2 using a variety of vectors and protocols to treat LCA2, and many believe Food and Drug Administration approval is possible.9

Though the initial clinical results have been encouraging and have led to improvements in visual function lasting several years, there is evidence that the underlying retinal degenerative process in LCA2 may not be slowed by the delivery of RPE65. Artur Cideciyan, PhD, and colleagues recently demonstrated continued photoreceptor degeneration after therapy at a rate consistent with the natural history of LCA2.10 These results affirm the need for long-term clinical studies of these therapies, and for ongoing research aimed at slowing the kinetics of the underlying degeneration, which may be perpetuated by “downstream” processes unaffected by delivery of the gene product.11

Several other inherited retinal degenerations are in early-phase clinical trials using a number of different viral vectors, including choroideremia, autosomal recessive retinitis pigmentosa, Stargardt’s, and Usher syndrome (type IB), with many others in preclinical animal studies. Most of the clinical work involves transduction with AAV or lentiviral vectors. Currently, the long-term LCA animal model data suggests ongoing production of RPE65, but there is no regulation of the kinetics of the gene production. For LCA2, this may not matter, but for other disease states, retinal function may be more sensitive to the “therapeutic index” of the gene product.

While the success of the LCA2 trials demonstrated proof of principle that a deficient single gene could be delivered to the eye and restore function, and brought hope to many patients with inherited retinal disease for whom there has been no available treatment, designing gene therapy vectors for monogenetic recessive conditions requires a large amount of resources for a relatively small potential patient population. Bringing the cost of this technology down enough to encourage exploration into rarer inherited retinal degenerations may require a broader potential market overall. It is exciting to explore how this technology could be used to help restore or preserve vision for more common conditions.

Age-related macular degeneration is a leading cause of irreversible blindness in the United States and is increasing in prevalence. Though the pathophysiology of AMD is complex and multifactorial, the mainstay of treatment for the neovascular form is vascular endothelial growth factor inhibition, which currently requires monthly evaluation and repeat intravitreal injections. Though this represented a breakthrough in the treatment of this disease, the frequency of required injections is burdensome and expensive. Myriad preclinical studies have explored other growth factors involved in the pathogenesis of neovascular AMD and other delivery models, including subretinal injection, subconjunctival injection, intravitreal injection of longer-acting molecules and intraocular delivery devices.12,13

Peter Campochiaro, MD, and colleagues demonstrated safety in a Phase I study of pigment epithelial derived factor (PEDF) in an adenoviral vector with intravitreal injection. They demonstrated a dose-dependent clinical response with tolerable local side effects.14 Another Phase I trial using an AAV vector to express a soluble VEGF receptor is currently enrolling patients.15


Besides VEGF, PEDF and placental growth factor, other molecules such as endostatin and angiostatin modulate the permeability of the retinal and choroidal vasculature and represent intriguing targets for gene therapy. A Phase I study of subretinal injection of a lentiviral vector-expressing endostatin and angiostatin is currently enrolling patients with advanced neovascular AMD.14 Another trial involves the use of an AAV vector to deliver a soluble form of the VEGF receptor into the eyes of similar patients.15 These are landmark trials of drugs that may ultimately replace monthly therapeutic injections for patients with neovascular disease.

Retinal vascular disease, including diabetic retinopathy and retinal vein occlusions, represents another large target population with numerous molecular targets for gene therapy. As in AMD, VEGF inhibition with monthly intravitreal injection has become the mainstay of treatment for macular edema due to diabetes and vein occlusion, and clinical trials are under way exploring the role of VEGF inhibition in retinal neovascularization in proliferative diabetic retinopathy. In both AMD and diabetic macular edema, monthly injections are often required for months to years, and lapses in treatment can lead to further vision loss. There are currently no clinical trials for gene therapy in retinal vascular disease.

There are prospects for commercially available gene therapies for retinal disease in the near future, but much work remains to be done. In the field of inherited retinal degenerations, the next step will be to expand the indications available for treatment, and initiate treatment earlier in the disease process, which will require excellent safety and efficacy data in the current and future clinical trials.

Similarly, in AMD and retinal vascular disease, where we have increasingly effective therapies, the safety of long-term, viral-vector-mediated gene transduction will need to be demonstrated. Especially for conditions that have existing therapies, the cost of gene therapy will need to be justified. In a culture of ever-increasing health-care costs, the novelty and intrigue of new technology must be balanced with thoughtful cost-effectiveness analysis.

Finally, it remains to be seen whether gene therapy may be used in conjunction with, in place of, or will be replaced by cell-based regenerative therapies on the horizon.16 One thing is certain: For thousands of patients with inherited retinal degenerations potentially amenable to treatment with this technology, the future is brighter than it was before.   REVIEW


Dr. Campbell is a vitreoretinal fellow at the Casey Eye Institute, Oregon Health & Science University. Following fellowship, he will return to the Wilmer Eye Institute to serve as the Stephen J. Ryan Assistant Chief of Service. Dr. Stout is vice-president and a professor of ophthalmology at OHSU. Dr. Stout can be contacted at stoutt@ohsu.edu. 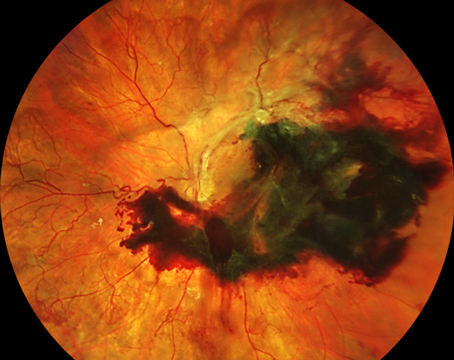