The Comparison of Age-related macular degeneration Treatments Trial was a groundbreaking clinical study that redefined comparative-effectiveness research.1 As with any exceptional trial, CATT answered many questions while raising others.

This article will review the findings of CATT and compare them with several similar studies that looked at various anti-VEGF treatment alternatives in patients with AMD.

In CATT, 1,185 patients with neovascular AMD were assigned at enrollment to one of four treatment groups defined by dosing regimen (monthly versus as-needed) and drug (bevacizumab versus ranibizumab) with monthly review.2 At year one, patients initially assigned to monthly dosing were reassigned randomly to monthly versus as-needed treatment, without changing the drug utilized. Treatment consisted of 0.5-mg ranibizumab or 1.25-mg bevacizumab.

Overall, at both one and two years, ranibizumab and bevacizumab had similar beneficial effects on visual acuity when the dosing regimen was the same. At two years, the mean gains in visual acuity between the two drugs were within 1.4 letters. Collectively, at two years, 60 percent or more of the patients in all groups had 20/40 vision or better. Subtle differences were detected in year two between dosing regimens: the as-needed dosing of either drug at two years produced 2.4 letters less mean gain versus monthly dosing (p=0.046). The greatest difference in mean gain in visual acuity was between ranibizumab monthly and bevacizumab as-needed (3.8 letters).

Other recent clinical trials provide insight into optimal treatment strategies for neovascular AMD. The alternative treatments to Inhibit VEGF in Age-related choroidal Neovascularization, or IVAN, randomized trial performed in the United Kingdom with 610 participants revealed that the comparison by drug was inconclusive; at one year bevacizumab was neither inferior nor equivalent to ranibizumab using a 3.5-letter limit.3 At one year, the mean difference between ranibizumab and bevacizumab was two letters in favor of ranibizumab. When IVAN examined dosing strategies, discontinuous treatment was equivalent to continuous treatment at one year. The discontinuous treatment group in IVAN received three loading injections before moving to as-needed treatments, but if there was any leakage, the patient received another cycle of three doses given monthly. At the two-year primary outcome in IVAN, neither the drug nor treatment regimen comparison was conclusive.4

In another clinical trial comparing bevacizumab and ranibizumab for neovascular AMD, MANTA, the Multicenter Anti-VEGF Trial in Austria, 321 patients were randomized to as-needed treatment with ranibizumab versus bevacizumab following three initial monthly injections. Note that all patients were treated with baseline as-needed protocols, as there were no monthly treatment arms in MANTA. The top-line results for MANTA showed that bevacizumab was equivalent to ranibizumab for visual acuity at all time points over one year.5 In MANTA, the mean increase of visual acuity at 12 months in the bevacizumab group was 4.9 letters while the ranibizumab group gained 4.1 letters (p=0.78). Thus, MANTA (as opposed to CATT and IVAN) showed a slightly favorable trend toward bevacizumab (although not statistically significant).

The Groupe d’Evaluation Francais Avastin versus Lucentis for neovascular AMD (GEFAL) study examined 501 patients in France.6 In this study comparing bevacizumab and ranibizumab, an as-needed dosing regimen was initiated following three loading doses, and patients were followed for one year. In GEFAL, at the 12-month primary endpoint, the two drugs were equivalent for visual acuity.

In contrast to CATT, these three other comparative studies performed three loading doses in their respective as-needed treatment arms, whereas the as-needed treatment arm in CATT did not require loading doses. One of the more disappointing outcomes of the CATT year-two results centered on the reassignment of monthly treatment patients to as-needed treatment in the second year of the study (the same drug was utilized for both years). Study patients treated monthly in year one demonstrated very little carry-over protection when treatment was switched to as-needed dosing in year two. With either drug, switching to as-needed dosing after one year of continuous monthly treatments produced a mean 2.2-letter decrease. This decline in year two resulted in mean visual acuity virtually equal to that produced with as-needed dosing for the full two years. These results suggest that it is necessary to continue treating monthly in order to preserve any gains achieved with a baseline monthly dosing protocol, as any switch to as-needed dosing will likely lead to a small loss of vision.

This absence of carry-over protection calls into question the common practice of delivering three scheduled monthly injections for new onset exudative AMD patients before switching to as-needed dosing (i.e., utilizing a dosing schedule similar to the PrONTO protocol).7 If CATT demonstrated that monthly treatment in year one provided no additional benefit when patients were switched to as-needed dosing in year two, it is questionable as to why three initial monthly injections provide any added stability versus baseline as-needed dosing.

In CATT, there were more patients with dry optical coherence tomography imaging at the end of year two in the monthly treated groups than the as-needed treated groups. The monthly ranibizumab treated group had the highest proportion of patients with no fluid on OCT. In IVAN, at both one and two years, the mean foveal retinal thickness did not differ significantly between ranibizumab and bevacizumab. However, the patients receiving continuous treatment had significantly reduced mean foveal retinal thickness versus discontinuous treatment. In MANTA, there were no significant differences in the decrease of retinal thickness between ranibizumab and bevacizumab. The role that thinner, drier OCT results may play in geographic atrophy formation remains to be determined.

In IVAN, there was no statistical difference at one year between treatment regimens in the number of serious systemic adverse events. Numerically, there were more serous systemic adverse events in the bevacizumab group than the ranibizumab group, but this difference did not reach statistical significance (p=0.25). In IVAN, in contrast to CATT, at one year there was a lower rate of arteriothrombotic events or heart failure in participants receiving bevacizumab (p=0.03), but no difference between treatment regimens was found (p=0.34). In year two of IVAN, the rate of arteriothrombotic events or heart failure was no longer significantly different between drugs. However, year two of IVAN did reveal an increased risk of systemic SAEs and death with discontinuous treatment, including a twofold increase in mortality (p=0.01). MANTA reported that neither the total number of adverse events nor the number of adverse events in any specific subgroup was significantly different between ranibizumab or bevacizumab. Finally, GEFAL revealed a higher number of systemic serious adverse events in the bevacizumab arm, but this increased number was not statistically significant.

IVAN was the only one of the four major comparative trials that measured serum VEGF levels. At one year, serum VEGF was significantly lower with bevacizumab (p<0.0001) and higher with discontinuous treatment (p=0.004). At year two, there was a consistent further drop in serum VEGF for both drugs. As more data is collected, concerns of systemic VEGF suppression with intravitreal bevacizumab may alter the future use of bevacizumab in AMD and other ophthalmic disease states such as retinopathy of prematurity.9-11

Endophthalmitis developed in 11 patients in CATT (0.06 percent of injections, 11/18, 509 injections), with four cases utilizing ranibizumab and seven cases utilizing bevacizumab (p=0.38). In 10 of these 11 cases, the patient was enrolled in a monthly treatment protocol. The greater number of injections seen in monthly treatment leads to a greater risk of endophthalmitis. At one year, IVAN reported one case of severe uveitis, MANTA reported no cases of endophthalmitis, and GEFAL reported two culture-negative endophthalmitis cases that developed in a single patient. In clinical practice, the common use of compounding pharmacies in the preparation of bevacizumab, among other medications, is also of concern and has recently received much attention in the lay media.12

With the recent addition of aflibercept, clinicians now have several reasonable treatment options for exudative AMD. The ideal treatment regimen remains unknown. Nearly all trials to date have examined either a monthly regimen or a modified as-needed approach. In clinical practice, many clinicians employ a treat-and-extend protocol, though it has the least evidence of comparative efficacy. As we move forward with our collective decision-making, clinicians will continue to balance optimal visual acuity results, maintaining a fluid-free retina without atrophy, treatment burden, systemic risks and cost in a complex decision algorithm. CATT has clarified many of our decisions while at the same time introducing new variables for future investigation.  REVIEW

Current and Potential Uses of Ocriplasmin 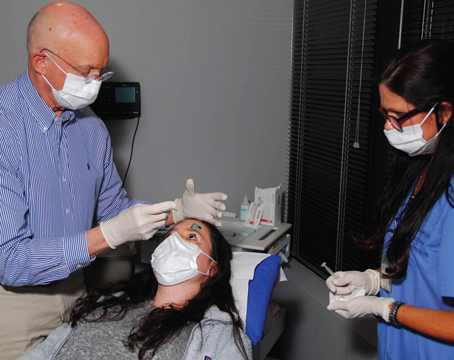