Many attempts have been made to develop a pharmacologic agent that could promote enzymatic vitreolysis. Until now, none had been successful in at inducing both synchesis and syneresis without adversely affecting the retina. Phase III data for ocriplasmin has been published and its Food and Drug Administration approval has confirmed that there is finally a viable pharmacologic option for symptomatic vitreomacular adhesion.

The transparent, gel-like vitreous was once considered innocuous, probably due to being nearly invisible and difficult to examine. However, advances in imaging capabilities have revealed that, in fact, the vitreous is an important ocular structure that plays an integral role in a variety of retinal diseases.1,2 As humans age, the gel-like vitreous slowly liquefies, the vitreoretinal interface weakens and the vitreous detaches.3,4 As this process takes place over time, many people will have stages of incomplete dehiscence, producing VMA. If this adhesion does not resolve itself or causes traction that results in visual distortions, it becomes symptomatic VMA. If the disruption to visual acuity is severe enough, it requires treatment.

There were some instances of acute vision loss associated with an injection, but in all cases vision returned to baseline or an improvement over time. One hypothesis is that acute induction of posterior vitreous detachment caused these changes and that stabilization over time allowed for visual recovery.

There are two primary indications for ocriplasmin. The first is for patients who have mild to moderate symptomatic VMA, and also have good visual acuity. Patients may be experiencing metamorphopsia, but test 20/40 or better on a Snellen visual acuity chart. Metamorphopsia can be tremendously disabling to functional capabilities, especially for those whose work requires them to read frequently or perform detailed visual tasks. However, vitrectomy surgery would not be a viable option for this group, because their vision is too good to risk the complications associated with surgery, including cataract formation, retinal tear, retinal detachment, bleeding and end-ophthalmitis.6 Historically, disease management for these patients has been careful observation, hoping the VMA would spontaneously resolve. However, the literature shows that many do progress and lose vision.7 The FDA approval of ocriplasmin provided surgeons with a minimally invasive means of treating these patients who previously had no viable option.

The second set of patients are those with more moderate VMA whose visual acuity has deteriorated to 20/80 or worse, sufficient to justify surgery. Ocriplasmin is the ideal first choice in these patients. I have found that it does not require drops before or after, nor any eye patch, and the patient need not be in the prone position. Administering the injection is very straightforward and patients go home shortly thereafter. It is important to note that the large majority of responders demonstrated resolution of VMA by day seven, and all did so by day 28 of the study.
An example of the significance of this is with macular hole. Two main factors in the success of surgery for macular hole are baseline vision and size; thus delaying surgery could have a negative impact on the final prognosis. Patients and physicians will know quickly if the injection has worked, allowing them to proceed to surgery with minimal to no delay if necessary. In addition, a lack of response to the injection has no influence on the success rate of surgery.

During the preparation for similar clinical trials, I began to evaluate how many patients would fall into these two groups. I was surprised to realize that a small but steady number of candidates came into my clinic each week who might benefit from this treatment modality. These were patients who were either symptomatic from the VMA or vitreomacular traction, or suboptimally responsive to treatments for underlying disease (such as anti-VEGF treatment for neovascular AMD or diabetic macular edema). We do not know if the patients with underlying disease and VMA will respond better following this treatment, but it is a reasonable approach to relieve the VMA in an attempt to improve treatment response. Surgery is only a last-ditch option, as the durability of intravitreal injections decreases following vitrectomy.8-11 We do know that it is less effective in patients with epiretinal membranes. When patients were stratified, 37.4 percent of ocriplasmin-injected eyes and 14.3 percent of placebo-injected eyes achieved resolution of VMA when no ERM was present. This is in stark contrast to the 8.7 percent and 1.5 percent of eyes with ERM, respectively, that achieved resolution of VMA.

The potential for enzymatic vitreolysis presents an enormous shift in the current treatment paradigm, and I believe that our early use will be in the groups described above. We are still learning to identify VMA and recognize how many disease states it impacts. Going forward, we will formally investigate the anecdotal claims of the positive influence of resolution of VMA on response to anti-VEGF treatments. As we expand our use of ocriplasmin, we may modify the delivery method to achieve even greater efficacy at inducing resolution of VMA or full posterior detachment.  REVIEW

Dr. Heier is the director of the Vitreoretinal Service at Ophthalmic Consultants of Boston; and the director of retinal research and co-director of the vitreoretinal fellowship at OCB/Tufts Medical School. He is a scientific consultant to Thrombogenics, Genentech and Regeneron. He also receives research income (through Ophthalmic Consultants of Boston) from Genentech and Regeneron. Contact him at jsheier@eyeboston.com. 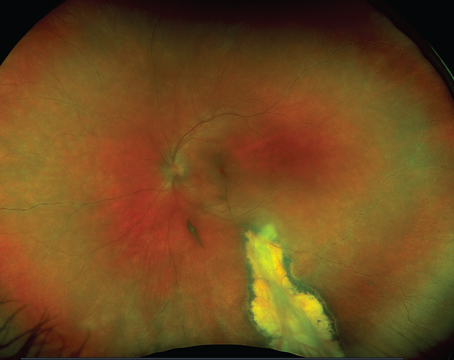 A Review of Retinitis Pigmentosa