As observers of the refractive-surgery realm will tell you, it’s taken a while for the United States to get a toric phakic intraocular lens. At long last, however, the Food and Drug Administration approved Staar’s Visian Toric ICL for the correction of up to 4 D of cylinder, giving refractive surgeons a new, potentially versatile option for correcting their patients’ refractive errors. If you’re one of the many who were waiting for this development, and you’re ready to begin implanting these lenses, here are some helpful tips from surgeons who’ve already done it.

Surgeons say that, just as with the non-toric Visian, sizing of the lens is important, due to where it sits in the eye.

“Fundamentally, one thing that’s worth understanding is that it’s different than a toric IOL that you’d implant during cataract surgery,” explains John Vukich, MD, director of the Refractive Surgery Service at Dean Clinic in Madison, Wisconsin, and associate clinical professor of ophthalmology at the University of Wisconsin-Madison. “With a toric IOL, you’re looking at corneal astigmatism as the primary driver of the amount of correction that you use. Here, this is a refractive procedure; you’re not changing the fundamental relationship between the cornea and the natural lens; instead, you’re treating the entire refractive error. Therefore, corneal topography remains important; the surgeon should look for irregularity and signs of atypical corneal contour. That said, you treat the patient’s refraction and not the corneal topography; it’s a different way of thinking about the refractive error. The consequence of that is that it tends to be a little bit easier to get the precise correction you’re looking for with a toric ICL.”

The toric Visian comes in four sizes (overall diameter), and the size the surgeon selects is based on white-to-white or sulcus-to-sulcus measurements. The lens is designed to be placed entirely within the posterior chamber directly behind the iris and in front of the anterior capsule of the crystalline lens. “In terms of the right size, we want to implant this so there’s approximately 250 to 750 µm of vault centrally between the crystalline lens and the posterior surface of the ICL once it’s in the eye,” explains Dr. Vukich.

Dr. Vukich uses the white-to-white measurement. “This is the FDA-approved way that the lens nomograms are set up,” he says. “I measure the white-to-white distance myself. I don’t use an IOLMaster or other biometric measurements because they’re often not interpretive in terms of where the limbus actually is. Often, these prospective toric ICL patients are chronic contact lens wearers and therefore there’s some ambiguity as to where, exactly, the limbus is located. As such, a surgeon’s judgment is actually better than allowing a machine to place a perimeter around the cornea and declare, ‘This is the limbus.’ My results have been excellent, and I haven’t had to explant or exchange an ICL because of over-vault in several years—and I implant them regularly. I’m not saying there’s a zero chance of vault issues, but if you’re comfortable, careful and consistent with the measurements, you’ll get good results.”

Majid Moshirfar, MD, medical director of Hoopes Vision Refractive Research Center and professor of ophthalmology at the John A. Moran Eye Center at the University of Utah, uses ultrasound for lens sizing. “I usually use high-resolution ultrasound to carefully measure the sulcus-to-sulcus dimension,” says Dr. Moshirfar. “Then, once the sulcus is measured, we also look at the lenticular rise and the aqueous depth—not the anterior chamber depth. We measure the latter from the endothelium to the anterior capsule. Then, using those measurements, I’m mainly using the Parkhurst nomograms to choose the proper ICL size that I’ll use for the case.”

Dr. Moshirfar acknowledges though that not all surgeons have access to those ultrasound technologies, though. “If you want to use the white-to-white measurement, I would take it from the Galilei and the Pentacam and average them. You can use the modified FDA nomogram based on the average white-to-white measurement from those two devices. However, I think ultrasound allows you to make a better judgment on lens sizing because you can see how thick the iris is and what the angle of the anterior chamber is going to be.” For most cases, he says the lens sizes are 12.6 or 13.2 mm. “Very seldom will I use the 12.1- or 13.7-mm sizes.”

Surgeons say you can help enhance your outcomes preoperatively in the way you order your lens. “My advice is this: If you can order the lens ahead of time, you’ll have a greater likelihood of getting a lens closer to what you like,” he says. “What I mean is, many times you can order a lens that’s weighted exactly at the 180-degree meridian and you don’t need to change it at all. But, if you order it at the last minute, you may have to rotate it 10 to 15 degrees, and then the implantation can become more difficult. Try to get a lens that’s within five degrees of the axis that you want.”

Dr. Moshirfar says that if you have experience with the non-toric ICL, selecting the right patients when you’re starting out with the toric ICL can make a difference as you gain confidence with the lens. “I recommend starting with patients who have more myopia than astigmatism,” he says. “Start with someone who’s -8 D with 2 or 3 D of astigmatism. Do this, and there won’t be a major learning curve for someone who’s been using the ICL for years.

“For those who have never implanted an ICL, however,” Dr. Moshirfar adds, “I’d encourage them to instead begin with the non-toric ICL for high myopes.”

One of the interesting design features of the toric Visian is that the lens ships with the astigmatic correction already ground into the proper axis (hence Dr. Moshirfar’s comment about ordering the right lens ahead of time). It’s designed so that no more than 22.5 degrees of rotation is necessary. This has the potential to make the implantation easier than a lens that needs to be rotated into position by a high number of degrees.

“The critical axis is the horizontal,” Dr. Vukich says. “You want to know where the 180-degree axis is, so you need to mark that, accounting for cyclotorsion. You don’t have to mark the astigmatic axis on the eye. Instead, you’re just rotating to the zero-to-180 degree meridian because the astigmatic axis is already part of the ICL. You’re either rotating it clockwise or counter-clockwise a few degrees in one direction or the other. Inherently, it’s easier to mark at the zero-and-180 meridian, since it’s within the palpebral fissures and can be done at the slit lamp.

“I use the YAG laser marking method,” Dr. Vukich continues. “At the slit lamp, under topical anesthesia, with the YAG set to 5 mJ and the anterior focus, I make a slight divot in the epithelium at the zero-and-180 degree axis. I then touch the divot with a marking pen. The mark is durable—it won’t fade or bleed out into a diffuse, large mark that’s ambiguous. The mark will heal the next morning.”

Dr. Moshirfar says the need for a lot of intraoperative rotation can make the case more challenging because rotating the lens can be difficult. “It’s a rectangular-shaped lens,” he says. “This is unlike other toric IOLs, such as cataract lenses, with which we’ve gotten used to the toric concept. Sometimes it just doesn’t want to budge. It’s forgiving for 3 to 5 degrees of rotation, but if you want to rotate it 15 degrees, it keeps wanting to go back to the original 180-degree meridian you started at; you might as well rotate it 30 degrees.” It’s for this reason he advocates ordering the lens ahead of time, so the axis will be very close to the patient’s astigmatic axis when properly implanted.

Right now, proper implantation involves making a peripheral iridotomy. In the future, however, it’s likely the lens will be modified to ship with a hole in it. “I’m hoping that once we get the new version of the ICL with the hole in it, we won’t have to do the peripheral iridotomy ourselves anymore,” he says. “That will be a lot more rewarding. Right now, when you do the laser PI prior to surgery or the surgical PI at the time of the implantation, in some patients you can get some light scattering and aberrations.”

In terms of results and adverse events, here’s what the surgeons and the clinical trial have found:

In the realm of adverse events, Dr. Vukich says the single most common one is temporary intraocular pressure elevation related to incomplete visco removal or, less commonly, an incomplete peripheral iridotomy or an iridotomy that’s too peripheral. “So, you can see angle-closure glaucoma,” Dr. Vukich says. “But that’s in far less than 1 percent of patients, and is easily avoidable by having an intact, patent peripheral iridotomy.”

Dr. Moshirfar says that, at least for the nine eyes he’s done so far, it appears that for many patients, the lens can actually achieve greater amounts of cylinder correction. “It’s interesting to see that, even if the toric power is 3 or
4 D, many of these patients get more efficacy than the designated power, meaning that if you put in a 3.5-D lens, you might actually get 4.25 D of effect.”

Dr. Moshirfar adds that, in some cases, some fine-tuning may be required. “This will be with PRK or LASIK,” he explains. “I tell patients with high amounts of cylinder—like 5 or 6 D—that the toric ICL may not get all of it and after three months we may have to do a touch-up.”  REVIEW

Dr. Vukich is a consultant to Staar. Dr. Moshirfar has no financial interest in any products mentioned.

Navigating the Gray Areas of RLE 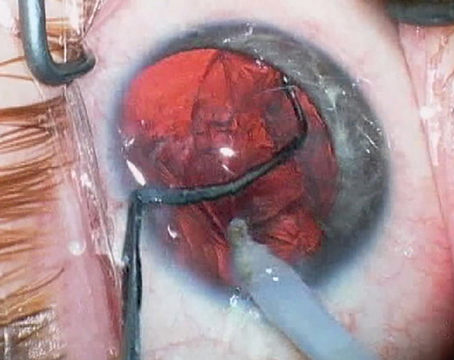 Is There Still a Place For Manual LRIs?