Recently, responses to an online survey from 1,205 members of the American Society of Cataract and Refractive Surgery revealed shifting patterns in cataract surgeons’ use of the different options for endophthalmitis prevention. (Similar surveys were done in 2007 and 2014.) Findings from the current survey include:

• Sixty-six percent of cataract surgeons are using intracameral antibiotics (compared to 50 percent in 2014 and 30 percent in 2007). Of those using IC antibiotics, 38 percent started doing so within the past two years.

• Only 5 percent of cataract surgeons are now using irrigation bottle infusion or subconjunctival injection to deliver the antibiotic.

• Among surgeons not using intracameral antibiotics, 66 percent cited concerns about risks associated with mixing or compounding the antibiotic as their reason; 48 percent didn’t see it as necessary; and 42 percent cited cost as the reason.

• If a commercially approved IC antibiotic were available, 93 percent say they’d be using it.

David F. Chang, MD, a clinical professor at the University of California, San Francisco, and in private practice in Los Altos, California, reported on the survey results in a recent publication.1 He notes that the results of the survey are significant. “There were approximately 1,200 respondents for each of the 2007, 2014 and 2021 ASCRS member surveys, making them among the largest surveys ever conducted on surgical antibiotic prophylaxis,” he says. “In addition, identical questions were posed whenever possible in all three surveys, which provides a way to evaluate changing trends in practice patterns over time.”

Dr. Chang points out some of the most striking trends revealed by the data. “To see usage of intracameral antibiotic injection continuing to increase over time—to now almost two out of every three surgeons—is a very compelling trend, given the lack of any approved commercial solutions in the U.S. and in so many other countries,” he says. “This probably reflects the growing body of evidence that has mostly come in the form of large retrospective trials. The second striking trend is the shift to moxifloxacin preference (83 percent of U.S. surgeons, compared to 31 percent in 2014) and away from vancomycin (6 percent of U.S. surgeons, compared to 52 percent in 2014). This was undoubtedly driven by recognition of the rare but devastating complication of HORV [hemorrhagic occlusive retinal vasculitis] associated with vancomycin, along with new studies on moxifloxacin safety and efficacy.

“Finally, there was a decrease in the use of topical pre- and postoperative antibiotic prophylaxis,” he notes. “This was mainly among surgeons employing intracameral antibiotics, where one out of four didn’t add topical antibiotics. As many as half of all surgeons would drop, or consider dropping, the topical antibiotic if a commercial intraocular antibiotic were approved.”

Asked how these survey results might affect clinical practice, Dr. Chang points out that although end-ophthalmitis is very rare, medico-legal considerations are a factor in every clinician’s decision-making. “Those using compounding pharmacies or using Vigamox solution off-label for their intraocular moxifloxacin source can defend these practices based on their use by a significant percentage of cataract surgeons, as documented in this most recent survey,” he notes. “In addition, I believe that many ophthalmologists already using intracameral antibiotic prophylaxis may have been hesitant to discontinue topical antibiotics, for fear that their use was still the community standard. This survey, in which half of the respondents seemingly question the necessity of topical antibiotics in addition to intraocular injection, should allay that concern.”

ASCRS and the U.S. Veterans Health Administration are now working to organize a multicenter, prospective randomized clinical trial in the United States to provide some level-1 evidence to help guide surgeons in their choice of how to manage this. The Topical vs. Intracameral Moxifloxacin to Prevent Endophthalmitis study will compare the efficacy of intracameral moxifloxacin to topical moxifloxacin alone.

Trend Analysis and Glaucoma Progression Rate
In advanced glaucoma, where there is considerable risk of developing visual disability, estimating the rate of progression is vital. However, researchers in Osaka, Japan, believe that trend analysis of visual field (VF) global indices may underestimate the rate of progression in advanced glaucoma due to the influence of test points without detectable sensitivity or blind locations.1

To test this hypothesis, they compared the rates of change of VF global indices with and without exclusion of undetectable points at various disease stages. They also developed targeted mean total deviation, an average of total deviation values that excludes undetectable locations. The results demonstrated that MD rate of progression is lower in severe glaucoma compared with earlier stages, and this apparent reduction becomes smaller if consistently undetected VF locations are removed.

The study assessed 648 eyes of 366 glaucoma patients with eight or more reliable 30-2 standard automated perimetry tests taken over more than two years. Targeted mean total deviation was calculated as the average of the total deviation values after excluding locations that were consistently undetected (i.e., had a threshold sensitivity value of <0 dB). Eyes were classified as early (≥-6 dB), moderate (-6 dB to -12 dB), advanced (-12 dB to -20 dB) and severe (<-20 dB) based on baseline MD. The rates of change of MD and targeted mean total deviation in each stage were statistically compared.

“The number of undetectable locations increased as MD decreased (worsened), and more than half of locations were already undetected in baseline tests in severe glaucoma,” they wrote in their paper. “These results support our hypothesis that the lower rate of MD slopes in severe glaucoma is caused by the presence of consistently undetectable, and thus non-progressive, locations.”

“It seems clear that conventional MD slope that shows positive slopes in 67 percent of cases with MD values less than -25 dB is not appropriate for estimating the rates of progression in these eyes, and targeted mean total deviation slopes may be a promising alternative,” the researchers concluded.

Light Exposure and the Eye
A study from Israel measured the effect of indoor light intensity on a group of preschool children.1

The study enrolled 1,131 children between the ages of 4 and 5 from schools in which light intensity ranged from 264 to 804 lux. Based on the level of light, researchers placed the participants in three groups: low illuminance (330 kids, 29 percent), medium illuminance (434 children, 38 percent) and high illuminance (367 children, 33 percent).

These findings are consistent with many other studies that linked light exposure to refractive development, with a possible biological link between increased dopamine release by brighter light and the well-documented ability of dopamine agonists to slow axial elongation, making a direct link more plausible, the investigators suggested. They add that if future studies confirm the findings, increasing light intensity in classrooms may help curb myopia development.

Treat the Patient— Not Just the Disease 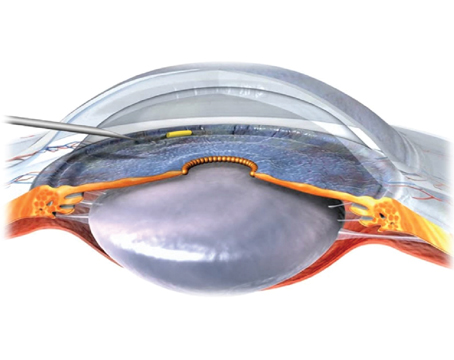 Sustained Delivery and Glaucoma: An Update