There’s an old saying: “It’s not how you start, it’s how you finish.” However, as far as LASIK is concerned, where you start has a great effect on where you finish. Taking time to plan the case, select proper patients, calculate tissue removal and identify potential pitfalls before they happen helps the surgery go smoothly. This is because, in a way, if you’ve taken the proper steps, then you’ve already planned for a good postop outcome. Here are my tips for smoother LASIK, after 20 years and thousands of cases.

Having used practically every laser technology in the world, I keep reiterating to visiting surgeons that technology is, of course, important, but it’s the technique and proper refraction—a refractive surgeon must know how to refract—that determine consistently successful outcomes. I believe that by knowing your technology, honing your technique and envisioning success ahead of time, you can get closer to mastering refractive surgery.

Aside from the usual consideration of the patient’s refractive error, there are a couple of other issues to address beforehand.

• Corneal surface status. For any LASIK surgeon, but especially the neophyte, preparing the surface ahead of time is very important. The ideal initial patient has no dry eye, anterior basement membrane disease, corneal scarring or previous corneal refractive surgery such as radial keratotomy.

With experience, though, you’ll learn to correct some ocular surface problems. You can improve the patient’s tear film through the use of cyclosporine A or lacrimal plugs. For patients with meibomian gland dysfunction, probing the gland orifices to clear them, or using a new treatment concept such as LipiFlow, can be useful for rehabilitating the cornea and ocular surface before surgery.

When you undertake the rehabilitation of the cornea, take your time. Monitor the patient for three to four weeks to look for signs of improvement that indicate that the patient can become a candidate. If the patient’s condition stabilizes, you can do the LASIK at four to six weeks after initiating therapy. Of course, some cases may have associated systemic issues such as rheumatoid arthritis or Sjögren’s syndrome. If this is the case, then the time needed to restore the surface may be longer, and you might wait a bit longer before doing surgery.

• Anticipate docking difficulties. The crucial step when using the femtosecond laser is docking. Catching red flags in the anatomy ahead of time can make this important step easier.

A small orbital fissure can pose problems when trying to dock the laser. The other important but usually overlooked aspect of anatomy is the conjunctiva. If the patient shows signs of excessive conjunctival tissue—conjunctivochalasis—you should anticipate problems with suction during laser docking. Conjunctivochalasis is particularly prevalent in older patients.

There are certain steps you can take, and problem signs to watch for, as you proceed with the LASIK.

• Docking the femtosecond. For a patient with a small orbital aperture, it can be difficult to achieve a solid dock without some manipulation. In such a case, have the patient direct his eye toward the opposite side of his face. This can often give you the extra space you need to dock properly.

Earlier I discussed patients with conjunctivochalasis, which can make it difficult to achieve and maintain suction. In these cases, if your preop evaluation has prepared you, you can be ready to squeegee the conjunctiva down as you affix the suction ring. If you see a hemorrhage from the patient with conjunctivochalasis during docking, you can always re-dock after squeegeeing it out. In some extreme cases, I’ve performed amniotic membrane surgery to correct conjunctivochalasis in order to be able to perform laser vision surgery in the future.

One exercise that helped me was getting a feel for my equipment without a patient being there. Practice the docking maneuvers and note areas where you may have to troubleshoot. For example, in some cases of difficult docking, it’s not the patient’s anatomy that’s at fault. Instead, a defective docking cone can cause an issue. However, if you’re not familiar with your equipment, you might not catch this.

It also helps to narrate the care, performing what’s known as vocal anesthesia. Make sure the patient is comfortable. Tell him to keep looking straight and not to move, and that he will feel some pressure. Then, approach the eye slowly. Don’t surprise the patient with sudden jerky movements. Tell him he’ll feel the suction, and make sure each step is nice and smooth. If you get the initial steps right, proper docking will almost happen as a matter of course.

• Making the flap cut. Once you’ve achieved a good dock and are proceeding with the femtosecond flap cut, monitor the eye to make sure everything is going smoothly. Make sure there are no cavitation bubbles blocking the beam or a break in suction occurring. Be vigilant that you’re accomplishing the cut as planned. And, in instances where something appears to be going wrong, don’t hesitate to abort the case. It’s better to stop and have the option to continue later than hope that a disaster won’t occur.

If you do have to abort the cut, you can often recut right there on the table, as long as a few conditions exist. If you haven’t yet begun to cut, or the cornea is only minimally cut, stop. Then, squeegee the conjunctiva, relocate the flap hinge, set the laser for about 50 µm deeper and, if the corneal thickness is acceptable, proceed.

• Working with the flap. Before you try to lift the flap, first make sure that you’ve achieved a full cut. Don’t just assume that you have a full cut and try to rip it open, which can lead to a tear. To make sure the cut is complete, I use an instrument I developed with Bausch + Lomb/ Storz that delineates the edge. Using the instrument, I go around the entire circumference of the flap to make sure it’s a complete cut. I then go in close to the hinge and come out toward the outer edge of the flap in one smooth motion. Satisfied that it’s separated from the bed, I can then lift the flap. My goal is as little manipulation as possible. The less manipulation, the better the patient outcome and flap alignment. More manipulation means more wrinkles, improper alignment, a longer surgical time and, ultimately, a poor result.

• After the ablation. When the ablation is done and the flap is back down, make sure it fits properly in the gutter and is equidistant from the sides in all areas. Also, use the high magnification level of your microscope to make sure there are no wrinkles. Again, try to do this quickly, with one sweep of your instrument, so you don’t have to manipulate it too much.

I see the patient 20 minutes postop, then the next day and then at a week. The postop regimen consists of Prolensa and Zymaxid for two weeks and a corticosteroid, usually Durezol, tapered over three weeks.

A Note on Enhancements

Even though I like all the forms of LASIK, I’m a strong proponent for advanced surface ablation enhancements on previous LASIK corneas.

If it’s a myopic ablation, PRK with 20 seconds of mitomycin-C works even better than a repeat LASIK because it actually ends up smoothing the LASIK flap. This is because in all LASIK flaps, if you remove the epithelium, you will notice some microstriae. That’s just the nature of the LASIK flap. However, if you do a surface procedure for a myopic enhancement over the flap, it actually helps eliminate these microstriae, benefiting the quality of vision and even improving the optical zone.

If where you start truly has an impact on where you finish, then I hope that knowing your patient’s preop refractive parameters, planning the procedure well, and staying abreast of how to troubleshoot your devices all allow you to finish strong with each of your LASIK surgeries. In the end, you won’t have to hope for success because you’ve already planned for it.  REVIEW

Taking a logical, stepwise approach and fighting for every line of visual acuity will pay dividends for you and your patients. Read More 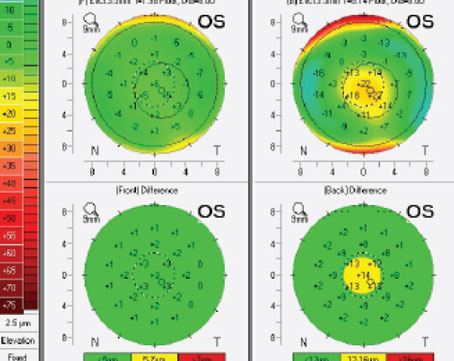