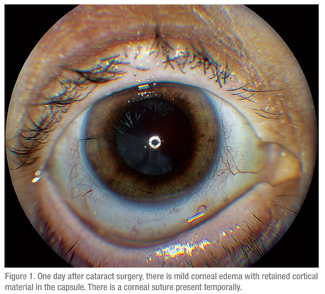 Timing of Rupture Is Key
Proper management of retained lens fragments begins at the time of capsular rupture. If vitreous prolapses into the anterior chamber, the cataract surgeon should attempt to address it whenever possible. Care should be taken to ensure that there is no vitreous to the wound as this increases the risk of developing CME, retinal detachment, and endophthalmitis.7 These vitreous strands often can be difficult to see. Diluted triamcinolone (e.g., nine parts BSS to one part triamcinolone) can be injected intracamerally to highlight the vitreous gel, facilitating vitreous removal.8 Once anterior vitreous cleanup is completed, placement of an intraocular lens should be considered. A recent study found that there was no significant difference in final visual acuity, retinal detachment rate or increased IOP in patients who were pseudophakic compared to aphakic at the time of retained lens material removal, while another study suggested that placement of a posterior chamber IOL at the time of cataract surgery was associated with a better visual outcome.9,10

Although not always possible, if there is enough capsular support, in-the-bag placement of the lens is preferred. A sulcus-fixated IOL is the next best choice. However, a single-piece haptic IOL should not be placed in the sulcus because these lenses may cause iris chafing and uveitis-glaucoma-hyphema (UGH) syndrome.11 Anterior chamber intraocular lenses can also safely be used in eyes with retained lens material. If a lens cannot be safely inserted, the patient may be left aphakic. When possible, the anterior segment surgeon should try to suture any wounds (See Figure 1) as the manipulations used during retained lens material removal may cause the cataract wound to open, leading to a shallow anterior chamber and further complications.12

Several anterior segment surgeons have advocated manipulating the retained lens fragments through pars plana incisions to assist in fragment removal. Some have tried to retrieve retained lens material by infusing saline into the vitreous cavity to allow the lens fragment(s) to float anteriorly. Another technique referred to as “posterior-assisted elevation” has been described. This is performed by inserting a needle or MVR blade into the pars plana and lifting the lens fragment into the anterior chamber.13 While techniques such as these can be tried, these additional manipulations are performed without good visibility of the peripheral retina. This may increase the rate of retinal detachment and should be used with caution. Vitreoretinal surgeons have the advantage of better visualization of the posterior segment (including wide- field viewing), facility with scleral depression and better control of fluidics in the posterior segment, all of which may lead to greater safety.


Management Approaches
Not all types of retained lens fragments are managed the same way. Small amounts of retained cortical material often can be followed as they can be absorbed without the need for surgery.14,15 In these cases, patients should be placed on topical anti-inflammatory drops and should be followed closely for the development of CME, retinal detachment and ocular hypertension.5,6 For cases with more significant cortical or nuclear material, the particles are removed via pars plana vitrectomy. PPV can facilitate normalization of IOP, reduce or eliminate intraocular inflammation and corneal edema, aid in identification and treatment of retinal breaks, and usually improve the patient’s vision.

Although the surgical approach varies depending upon the circumstances, the general surgical approach is as follows. After a core vitrectomy is performed, the presence of a posterior vitreous separation should be confirmed, and if not already present, a posterior vitreous detachment should be induced. This can usually be performed with the vitrectomy handpiece alone or with the help of a suction pick.16 Once the core vitrectomy is completed, the vitreous base should be shaved, ideally with the assistance of scleral depression as well as with wide-field viewing. This accomplishes two things: It reduces the chance that the vitreous skirt will get incarcerated into a wound or get pulled on, which can cause a retinal tear, and it facilitates greater removal of small lens particles that are often present inferiorly.

Cortical material, as well as small nuclear fragments, usually can be removed with the vitrectomy handpiece alone. Both 23- and 25-ga. vitrectomy have been used successfully.17 In cases with harder and/or more extensive nuclear material, a posterior segment phacofragmentation instrument (Fragmatome) can be used. This is basically a sleeveless phacoemulsification handpiece. In small-gauge vitrectomy, one of the cannulas can be removed, a sclerotomy can be enlarged with a 20-ga. MVR blade, and the Fragmatome can be inserted. Gary Lane, MD, of San Antonio, and one of the authors (SG) recently described a technique in which a sleeveless OZil handpiece (Infiniti, Alcon) instead of the Fragmatome was used to phacoemulsify the RLF (See Figure 2). The advantage of this technique is that it emulsifies the lens more efficiently than the Fragmatome, and the retained lens material stays at the instrument tip, reducing how often one has to reach into the posterior segment to retrieve the lens material.18

Afterwards, the anterior chamber should be irrigated to remove any RLF that might be hidden in the angle. Several air-fluid exchanges can be performed in order to remove small particulates that may be floating in the vitreous cavity. A lens can then be placed as needed.


Timing of PPV
There is no definitive answer as to when PPV should be performed. Some advocate immediate PPV (while the patient is still draped from the cataract surgery). Several possible advantages of this approach are that the patient can avoid undergoing two surgeries and the associated risks of anesthesia, and delayed removal of retained lens material can become more challenging if corneal edema occurs.
Appealing as this sounds, this approach is often not practical, as most cataract surgery is performed in an outpatient surgery center without an easily accessible vitreoretinal surgeon. Understandably, many vitreoretinal surgeons are also hesitant to perform surgery on patients with whom they do not have a professional relationship.7 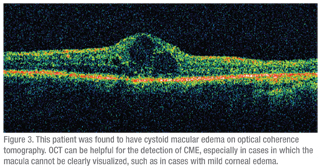 C.P. Wilkinson, MD, and W. Richard Green, MD, examined the histopathologic features of vitreous specimens after PPV for retained lens material and correlated these features with the time at which PPV was performed. The authors found no inflammatory cells when PPV was performed within three days of cataract surgery. Inflammatory cells occurred in 35 percent of specimens when vitrectomy was performed between days four and seven, and occurred in 80 percent of eyes that had RLF removed between days 61 and 90 after cataract surgery.19

Although this study provides compelling histological data suggesting that early removal of retained lens fragments reduces intraocular inflammation, the clinical data is more variable, and does not clearly suggest a time frame during which vitrectomy must be performed.20

Early vitrectomy also may not be feasible due to corneal edema. If present, corneal edema should be aggressively treated with topical steroids and intraocular pressure management, and vitrectomy should be delayed for a few days until the edema clears in order to provide better visibility into the posterior chamber.


Outcomes
Most patients with retained lens material have good visual outcomes. One recently published study was a retrospective review of 223 eyes that underwent PPV for retained lens material. In it, 71 percent of patients achieved visual acuity of 20/40 or greater. Slightly greater than 45 percent had an IOP greater than 25 mmHg at presentation, and 5 percent had a persistently elevated IOP. Less than 25 percent of cases developed CME (See Figure 3), and 9 percent developed a retinal detachment.9

Another recent study noted a similar visual outcome. The authors found that the predictors of 20/200 or worse visual acuity were the lack of an anterior vitrectomy at the time of cataract surgery, the absence of a sulcus IOL, preexisting eye disease, and the development of glaucoma.10 Vitrectomy within seven days of cataract surgery was also associated with a lower risk of glaucoma. These two studies are limited by their retrospective nature, and some of the findings regarding lens placement have several potentially confounding variables, but they provide insight regarding the timing and outcome of vitrectomy.

In summary, retained lens material is frequently a “two-surgeon situation” requiring expertise, cooperation and communication between the cataract and vitreoretinal surgeon. When a dropped lens is encountered, surgeons should continue with the operation as far as they are comfortable, including IOL placement. However, this should only be done if it appears as though the IOL will be stable; if not, it can spontaneously dislocate or can become dislodged during scleral depression. All larger wounds should be sutured to prevent hypotony and to reduce complications during PPV. Although CME and retinal detachment can occur, most patients have a good visual outcome.


Dr. Shah is a first year ophthalmology resident at Drexel University School of Medicine.  Dr. Garg is a member of MidAtlantic Retina, the Retina Service of Wills Eye Institute, and an associate professor of ophthalmology at Thomas Jefferson University.