Drugs that block the effects of vascular endothelial growth factor have become a mainstay in treating retinal diseases. The process of selecting the best treatment regimen continues to evolve, however, and depends on a number of factors.

“You can do a continuous treatment at a fixed interval, where you treat every month or every two months,” says Carl Regillo, MD. “That’s the least popular approach. Very few people do that because it may represent overtreatment in some people. The next is p.r.n. treatment, which is an approach to individualize therapy and minimize overtreatment. You treat monthly until the macula is dry and then you monitor closely and treat recurrences. The third approach is the treat-and-extend strategy, which some believe may represent the best of both worlds in disease control and treatment burden.” Dr. Regillo is director of the Retina Service of Wills Eye Institute, and a professor of ophthalmology at Thomas Jefferson University School of Medicine.

Treating every month or two is effective, but it is not ideal. As mentioned, it may be overtreating some patients. Additionally, it can be costly and inconvenient for patients, especially if they are treated monthly.

According to Dr. Regillo, some of the big clinical studies that have put p.r.n. regimens to the test have shown that the results are pretty good on average for about a year or so. “However, into year two, as shown in the CATT and IVAN studies,1,2 the approach doesn’t quite hold up with disease control and visual acuity improvement on average compared to monthly, fixed therapy. It is probably adequate for some people but not ideal for others,” he says.

The downside is that this approach allows for recurrences before retreating, and multiple recurrences over time may lead to significant disease progression from which some patients may not be able to completely recover.

Two recent studies have evaluated anti-VEGF injections for the treatment of neovascular AMD.1,2 In the IVAN study, the efficacy and safety of ranibizumab and bevacizumab intravitreal injections were compared. Patients were randomized to one of four groups: ranibizumab or bevacizumab given either every month (continuous) or as needed (p.r.n.). Six-hundred ten patients were randomized and treated. The comparison of visual acuity at one year between the two drugs was inconclusive, and visual acuities with continuous and PRN treatment were equivalent. Fewer patients receiving bevacizumab had an arteriothrombotic event or heart failure. There was also no difference between the drugs in the proportion of patients experiencing a serious systemic adverse event. Serum VEGF was lower with bevacizumab and higher with as-needed treatment.

The CATT study was conducted to describe the effects of ranibizumab and bevacizumab when administered monthly or as needed for two years and to describe the impact of switching to as-needed treatment after one year of monthly study. At enrollment, patients were assigned to one of four treatment groups: ranibizumab or bevacizumab either monthly or as needed. At one year, patients initially assigned to monthly treatment were reassigned randomly to monthly or as-needed treatment, but the drug assignment did not change. Among patients who were given the same treatment regimen for two years, the mean gain in visual acuity was similar for both drugs. The mean gain was greater for monthly than for as-needed treatment. The proportion of eyes without fluid ranged from 13.9 percent in the bevacizumab as-needed group to 45.5 percent in the ranibizumab monthly group. Eyes that switched from monthly to as-needed treatment experienced a greater mean decrease in vision during year two and a lower proportion of eyes without fluid. Both drugs had similar rates of death and arteriothrombotic events. The proportion of patients with one or more systemic serious adverse events was higher with bevacizumab than ranibizumab (39.9 percent compared with 31.7 percent).

Treat and extend is a more customized approach to treatment. “My impression that customized or individualized dosing is the best approach to manage patients led me to originate a regimen called ‘treat and extend,’ ” says K. Bailey Freund, MD, of Vitreous Retina Macula Consultants of New York, New York City. “This dosing schedule and technique has become very popular with retina specialists in the United States. Although I treat most of my patients with treat and extend, I also frequently use OCT-guided therapy in specific situations.”

Dr. Freund believes that treat and extend balances some of the benefits of both continuous monthly dosing and discontinuous OCT-guided treatment; however, there is currently no randomized clinical trial data showing that this strategy gives results as good as strict monthly dosing or OCT-guided dosing. “While it is unproven that visual results with treat and extend are equivalent to the alternatives, it is clear that the monthly visits required with the alternative regimens are onerous for patients to continue year after year,” says Dr. Freund. “I found that when I previously extended the interval between visits and injections to more than seven or eight weeks, there were more recurrent sight-threatening hemorrhages. These longer intervals may also occur because a patient forgets an appointment or needs to reschedule due to an illness. I think it’s best to factor in a little bit of a safety net even if you think a patient might be able to be extended longer.”
Because of the risks of longer intervals without continued examinations and injections, treat and extend is more of a “real-world” dosing strategy. “Obviously, there are some patients who cannot be extended beyond monthly therapy without developing recurrent fluid, so treat and extend helps us identify those patients who truly need monthly dosing,” Dr. Freund says.

According to Dr. Regillo, this strategy starts with treating monthly until the macula is dry. Once it is dry, the time to retreatment is extended out a little bit each time, such as by two-week intervals. The interval between treatments is extended until the patient recurs.
“You may be treating every four weeks at first,” he says. “If the patient is doing well, you extend it to every six weeks. If she is doing well, you extend it to eight weeks. If there is a recurrence at eight weeks, you go back to six weeks, or the longest, previously demonstrated disease-free interval. Over time, you often can figure out a given patient’s optimal treatment interval and maintain her in a steady fashion over long time frames.”

An added benefit of the treat and extend strategy is cost savings for the patient. Most patients have a co-pay, so cost is also a consideration.
Karl Csaky, MD, PhD, of the Retina Foundation of the Southwest in Dallas, says the challenge is that the three agents typically used all have very similar pharmacokinetics and durability plus or minus a week or so. “One confounding problem is that there appears to be an individualized durability interval that each patient demonstrates,” he says. “It becomes a question of what strategy you use to dial in that sweet spot between injections and find out whether they are, for example, a five-weeker or a six-weeker. It is unclear how to predict that upfront, although there will be strategies in the future for us to more quickly dial that interval in.”

He also notes that choosing a treatment strategy also depends somewhat on the status of the eye: “So, if it is the only good seeing eye, then you might want to be a little bit more aggressive with the interval. At the interval after which such an eye demonstrates recurrent fluid, we might want to have the patient come back even every four weeks just to be absolutely sure that we don’t put him at risk for a bleed. That is the major catastrophic event that we want to avoid.”

Catastrophic bleeds are even more concerning in a one-eyed patient who has good vision. “In someone with a poor seeing first eye that has not responded to injections, we tend to be a little bit more liberal about the injection regimen, says Dr. Csaky. “We will still try to keep the eye stable, but if there is little hope for vision improvement and the vision is bad, say worse than 20/200, and the fellow eye is seeing well, then we may not want to be as aggressive. The individual interval will be moderated by the status of the eye and the visual acuity of that eye. Right now, we don’t have any reliable anatomic marker that says how long we can go between injections; it is basically all trial and error. This is one of the areas of future research because it is clear that there is a spectrum of patients in terms of how long of an interval can be used between anti-VEGF injections.”

Dr. Freund believes it is also theoretically possible that treat and extend may lead to a lower risk of geographic atrophy than is observed with continuous monthly treatment. At two years, both the IVAN and CATT trials showed that eyes receiving monthly treatment were more likely to develop geographic atrophy than eyes receiving fewer injections in the discontinuous or p.r.n. cohorts.

“We may eventually see these small short-term visual benefits of monthly dosing over less frequent treatment will be offset by a greater long-term risk of vision loss due to GA,” he says. “While I think treat and extend represents a favorable compromise in terms of trying to reduce the dosing frequency while maintaining a ‘dry’ macula, given my concern that continuous treatment may increase the risk of GA, I am beginning to use OCT-guided therapy more commonly in my practice. I believe I’ve identified certain eyes in which OCT-guided therapy is more appropriate than treat and extend.”

For example, eyes developing foveal-threatening GA without vascularized pigment epithelial detachments or subretinal fibrosis may be suitable to consider switching to OCT-guided therapy as they are less likely to develop hemorrhage when they develop recurrent neovascular activity.

“I believe that combining what we learn from clinical trials and real-world experience allows retinal specialists to optimize their dosing regimen for each individual patient. Treat and extend is the most appropriate treatment strategy for most patients, and a subset of patients are better followed using OCT-guided therapy,” Dr. Freund says.   REVIEW

Premium IOL and refractive surgery patients—and surgeons—may have a new option to protect against a bad outcome. Read More
Retina

After decades of not much change, microscopes are beginning to change the way surgeons operate. Read More
Retina

Larger studies are needed to determine the best dosage and method of delivery of current experimental therapies. Read More
Retina

Physician burnout appears to be on the rise. Here’s why, along with some ideas on how to get better control. Read More
Retina

Multiple factors continue to push ASCs to the forefront as a better alternative to the hospital. Read More
Retina 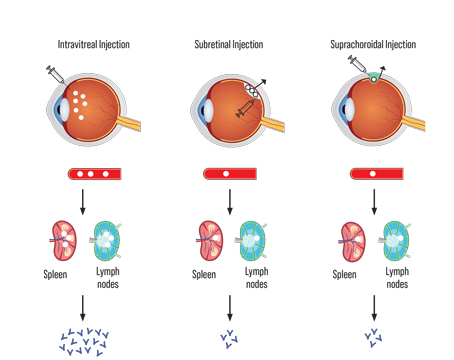