As a defense attorney, I often tell clients who are being sued for malpractice that just being in a courtroom means they’ve already lost: They lose time from their practice and have to deal with the stress of defending themselves in court. Because of this, the best malpractice defense is to not get sued in the first place. In this article, I’ll share my advice on how to decrease the odds of a lawsuit, based on 30 years of experience with malpractice litigation, much of it in the realm of refractive surgery.

One of the unfortunate facts of malpractice lawsuits is that just being a good surgeon won’t protect you from being sued. This has been borne out by personal experience as well as the scientific literature.

In 1991, in The New England Journal of Medicine, a study was published that looked at surgeries and resulting malpractice claims.1 In the study, a panel of physicians from Harvard Medical School studied 31,429 patient charts and tried to determine which of the charts contained evidence of significant injury that was caused by negligence of a health-care provider. They then separated out those charts with evidence of negligence and looked to see if any of those patients filed a suit in that jurisdiction. They found that, in those cases where they thought there was negligence leading to injury, only 2.8 percent of patients actually sued.

The physicians then flipped things around and looked at lawsuits that actually were filed from the data set and decided how many of them involved negligence leading to significant injury. They found that most of the events in which claims were made didn’t meet their definition of negligence. So, in the end, it seems most patients who are victims of negligence don’t file malpractice lawsuits and most of the patients who file lawsuits aren’t victims of negligence. The take-home message for physicians, then, is that being a good doctor and practicing good medicine won’t necessarily protect you from being sued.

So, if surgeon skill isn’t at the heart of malpractice lawsuits, what is? After defending ophthalmologists in refractive surgery lawsuits for many years, I’ve found that in these cases, more often than not, the suing patient feels the doctor didn’t communicate well enough.

As proof of how important communication can be, in one study researchers randomly selected 45 plaintiffs’ depositions from 67 depositions from settled malpractice suits against a large metropolitan medical center and tried to answer the question of why the patients sued. In 71 percent of the cases, the researchers identified problematic relationship issues, such as deserting the patient, devaluing the patient’s and/or the family’s views and delivering information poorly.2 With these findings in mind, here are some tips for communication that can help you avoid a lawsuit:

• Preop discussions. In many lawsuits, patients don’t feel that the surgeon is on their side after a complication occurs. You can help avoid this by starting the doctor-patient bonding process early on when you present the informed consent. Don’t just give the consent form to the patient and blurt out, “Let me know if you have any questions.” This is like a high-priced tour guide meeting you in a foreign country, shoving some maps in your hand and leaving with a quick “Have fun.” Instead, guide the patient through the form, explaining what the surgery entails, what the likely complications are and, if any complications occur, identify which ones you can fix and which ones would be more challenging. Don’t treat informed consent as a legal technicality you have to get out of the way, but see it as an opportunity to begin strengthening the doctor-patient relationship. Also, be sure to use procedure-specific consent forms and give the patient the forms as soon as you start talking about the procedure, not on the day of the surgery.

• After a complication. Though good preop communication is important, how you deal with a patient who has had an adverse event or complication is even more so.

First, contact your insurer and have someone walk you through how to have a conversation with the patient. Then, meet with the patient; don’t try to duck him. Unfortunately, I see this often: Once there’s a complication, the doctor doesn’t want to see the patient as much. This might be a natural reaction, since a surgeon feels he’s very competent and may not want to deal with direct evidence of whatever it is that he did, but it’s always counterproductive in terms of avoiding a lawsuit.

When you meet with the patient, don’t do it in your exam lane. Instead, sit next to him in a conference room or at a lunchroom table, put the chart in front of you and go over what happened. If you have an idea about what went wrong, tell him. If you don’t know, discuss what you think the possibilities are. And, most important: Tell him what you’re going to do about it. I’ve seen many lawsuits in which the surgeon told me that there was nothing to tell the patient because he was going to wait three months and then reoperate. “Did you tell the patient that was one of the options?” I always ask. To which the surgeon usually replies, “No, I just told the patient, ‘Come back in three months.’ ” The main message you should be conveying to the patient is that you’re on his side and that you’re companions in this, not adversaries. It will be you and him against the complication.

During your postop conversations with a patient who has a problem, be sure to ask, “How are you doing with earning income at the moment, is this causing a problem?” The financial question is relevant because some patients, a truck driver for example, may lose their jobs if they don’t see 20/40 or better in at least one eye. In fact, the first multimillion dollar LASIK lawsuit was brought by an airline pilot who was unable to land commercial jets due to glare at night.

I’m not saying you need to cover the patient’s expenses, but sometimes all he needs is a note from a doctor that he can’t work for the next week, or something that can trigger his disability coverage. If you don’t ask the question you won’t know the answer.

There’s also an emotional aspect you should address. Ask, “Are you handling this OK?” If the patient breaks down crying, it’s a good idea to spend 15 minutes or so with him or her, saying such encouraging things as, “Don’t despair—there’s hope. We’ll work through this together.”

• Dealing with second opinions. Communication issues often send patients running to another physician for another opinion, which can result in a lawsuit, depending on what that physician says. In my experience, most of the cases I get are a result of a comment that was made by another doctor. In the second study discussed earlier, for example, 54 percent of a sub-group of patients who sued said a health-care professional had suggested there was some maloccurence.2

One thing you must be aware of is that there appears to be a lot of vitriol between physicians who compete in the same area, and I’m seeing more incidents of competitors using lawsuits against each other as a marketing tool. For example, I’m aware of one case in which the second-opinion doctor erroneously told the patient he had suffered malpractice by a surgeon’s procedure, even though the procedure hadn’t even been performed. In this type of environment, if communication breaks down and an angry patient goes to a competitor for a second opinion, you could be heading for a lawsuit.

To short-circuit this possibility, you might want to say to the patient, “Maybe you’d like to talk to another doctor about this,” and then suggest someone. This way, even though it may hurt to suggest the patient get a second opinion, at least you’re exercising some control. By doing this, you can steer the patient toward someone you know will give an intelligent, independent opinion, and won’t try to steal the patient and turn this into a lawsuit that he can use against you.

In refractive surgery as in other specialties, complications are inevitable, even for a skilled surgeon. However, when it comes to avoiding a lawsuit, the fact there was a complication is much less important than how you deal with it.  REVIEW


Mr. Tiemeier is a partner in the law practice of Tiemeier and Stich in Denver. 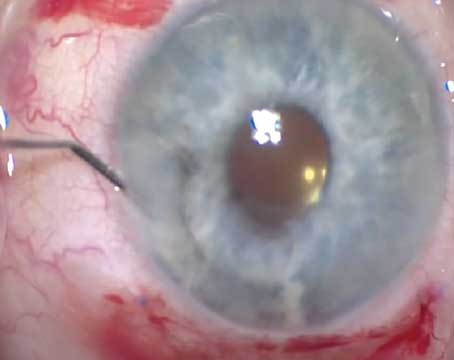 Is Referral Practice in Your Future?

The Dos and Don'ts of Femto Reimbursement

Meaningful Use of EHR Technology

Stuck With a Lemon: When Your EHR Fails