Meibomian gland dysfunction can be troublesome for our adult patients, but it can pose even more hazards for children: Chalazia and corneal scarring from MGD can lead to amblyopia. If you catch the problem in time and treat the patient intensively, however, you can achieve good outcomes.

In this article, we provide an overview of various treatments for meibomian gland dysfunction, blepharokeratoconjunctivitis and chalazia that have been explored in children and summarize specific published regimens.

Multiple meibomian glands line the upper and lower eyelid margins and secrete the oily component of tears. Ophthalmologists commonly diagnose and treat meibomian gland dysfunction, characterized by duct obstruction and alteration in the quality of glandular secretions that can lead to a dry, irritated ocular surface.1 Meibomian gland dysfunction can occur in isolation but can also be associated with blepharokeratoconjunctivitis, which consists of inflammation of the eyelid margin, and conjunctival and corneal inflammation in more severe cases. The most severe cases of BKC can lead to corneal perforation.2

MGD can lead to the development of chalazia, sometimes referred to as styes, which are benign nodular eyelid masses defined through tissue analysis to be chronic, sterile and having a characteristic lipogranulomatous inflammatory profile. They form within blocked meibomian glands and have a high recurrence rate in children, ranging from 17 to 67 percent.3-5 As mentioned earlier, unique complications of chalazia in children include amblyopia secondary to induced corneal astigmatism or mechanical ptosis. Accordingly, aggressive treatment may be needed to preserve vision.

Initial treatments are simple and can be done at home. They consist of the following:

• Lid scrubs and warm compresses. Lid scrubbing aims to remove inflammatory debris and crusts along the anterior lid margin (i.e., along the lash line). Dilute baby shampoo, dilute bicarbonate solution, warm water6 or commercial lid scrubs can be applied with a cotton-tip swab, clean cloth, or clean fingertips (make sure fingernails are short so as not to scratch the eyelid or ocular surface) to scrub the eyelid margin. Lid scrubbing can be as simple as rubbing the margin of the eyelids with clean fingertips while showering.5

Various treatment regimens and materials can be used when applying warm compresses in children. Uncooked rice in a clean sock can be microwaved for 20 to 30 seconds, then applied for five to 10 minutes to each eye, two to four times a day.8,9 (The caregiver should first ensure the rice is not so warm as to cause skin burns and be aware that microwaves can distribute heat unevenly.)8 A microwavable moist pack or hard-boiled eggs could also be used.9,10 It’s helpful in young, less-cooperative children to couple warm compresses with a distraction such as television, music or bathing.9

• Topical and oral antibiotics. Topical antibiotics are used to help control bacterial colonization of the eyelid margin, particularly against gram-positive organisms. Bacitracin or erythromycin ointment can be applied on clean eyelid margins at bedtime; these antibiotics are safe options if required chronically.7 Another option is chloramphenicol drops four times a day and chloramphenicol ointment at bedtime for one month, followed by ointment at bedtime only for two to three months.6

If the above treatments don’t suffice, oral antibiotics may be used to treat MGD­—not for their antimicrobial effect, but for the secondary anti-inflammatory properties and lipid modulation effect of certain classes.8 These are particularly useful in severe pediatric BKC or disease associated with ocular rosacea11 and can be used as a tool to wean patients off of chronic topical steroids.12 The most common oral antibiotics used are erythromycin in patients younger than 8 years of age and doxycycline in patients over 8; azithromycin, roxithromycin and minocycline have also been used.5,6,9,11-14 Tetracyclines are contraindicated in younger children due to teeth discoloration before completion of dentition.15

In the literature, erythromycin dosing has ranged from one-quarter to full-strength dosing of 50 mg/kg/day.9 While erythromycin can cause gastrointestinal side effects, it’s generally well-tolerated.5,9 Others have recommended azithromycin 5 to 15 mg/kg/day.9  We’ve found the use of clarithromycin 7.5 mg/kg b.i.d. to be effective and well tolerated. Reported doxycycline regimens include 50 mg b.i.d., followed by prolonged-release doxycycline 40 mg/day for maintenance therapy.16 Patients should be informed about photosensitivity associated with the use of doxycycline and advised to protect sun-exposed areas of the body.

The duration of oral antibiotics depends on severity. Most patients completed one round of antibiotic therapy within two to seven months, but reports range from one to four years of continual or intermittent use.9,11,13,14 A response to oral antibiotics is typically seen within two to six weeks.12-14 A general recommendation is to use oral agents for three to six months, and taper per clinical course9 to as low a dose as possible without causing recurrent symptoms, even to every-other-day dosing. When treating patients with ocular rosacea, some clinicians suggest treating moderate cases for six months and severe cases for 12 months with oral antibiotics.16 If topical drops and ointments are not enough to treat relapses, oral antibiotics can be restarted.12

• Topical tea tree oil. Demodex mite (D. folliculorum and D. brevis) infestation of eyelash follicles and meibomian glands is more common in children than previously thought, and can be associated with BKC and recurrent chalazia.17-19 They’re characterized by “cylindrical dandruff” along the eyelash base.17 Diagnosis may be more difficult due to lack of pediatric cooperation with eyelash epilation used to identify mites; however, diagnosis and treatment of Demodex should be considered in refractory cases of pediatric BKC.17

Due to its active ingredient, terpinen-4-ol, tea tree oil is the treatment for Demodex-associated lid margin disease.20 One group saw subjective improvement of symptoms (i.e., eyelid swelling, redness) after one week in all patients and full resolution of symptoms after three months using the treatment regimens outlined in Table 1 (p. 22).17 In this study, one patient had a recurrent episode of BKC that resolved with a second round of treatment.17 It’s recommended to use this regimen for six weeks to cover two life cycles of the mite,21 but four weeks of treatment has also been successful.17

Some providers have used flaxseed oil as a means of omega-3 fatty acid supplementation in children.5,8 One observational study reported success using flaxseed oil as maintenance therapy for pediatric BKC after initial intervention with oral antibiotics.5 Suggested regimens include 2.5 mL (one teaspoonful) daily5,8 and reducing administration to alternate days if possible.5 If capsules of flaxseed oil are too large to swallow, they can be broken and sprinkled onto food. Alternatively, ground seeds can also be used.8 Based on opinion alone, one group recommended not exceeding six months of use due to lack of data on chronic use of flaxseed oil in children.5

When inflammation is involved, the following treatments have proven useful.

• Topical steroids. While topical steroids are useful for initial control of acute inflammation or relapse, patients need to be monitored closely due to intraocular pressure spikes. Steroid-induced ocular hypertension occurs more frequently in children than adults, especially under 10 years of age, and can occur as early as one week after initiation of use three to four times daily.23,24 Topical steroid duration might be expected to last between one and 16 months, with many patients requiring intermittent treatments for more than six months.5 When using steroids, it’s best to taper to the lowest dose that allows for inflammatory control, to discontinue as soon as possible and to use steroids that are less likely to cause an increase in intraocular pressure, such as fluorometholone.7

• Steroid-sparing immunomodulators. In patients with keratitis or corneal scarring secondary to blepharokeratoconjunctivitis, topical cyclosporine A may be a useful maintenance therapy after initial control with topical steroids, due to the long-term side effects of steroids.16,25 One group had sustained control of disease in eight of 11 children over an average treatment period of 13 months using cyclosporine 2% q.i.d.25

When glands are blocked, the following interventions are effective.

• Intralesional steroid injection. For recurrent, non-resolving or multiple chalazia refractory to the above treatments, intralesional steroid injection is an option. Studies have demonstrated the success of intralesional triamcinolone injection in children with chalazia. One study showed an average time to resolution of 18.2 days after injection of an average of 3.5 mg of triamcinolone.10 Another study demonstrated resolution of chalazia within two to four weeks in 75 percent of patients, and resolution in 100 percent of patients, with one to two additional injections.3 Intralesional triamcinolone can be injected subcutaneously or, if the eyelid isn’t too swollen to be inverted, subconjunctivally.

Advantages of intralesional steroid injection, compared to incision and curettage, include less bleeding and scarring, ability to perform simultaneously on multiple chalazia, and ability to inject close to the lacrimal punctum.10 These advantages should be weighed against the risks of globe perforation, retinal or choroidal vascular occlusions, and possible skin depigmentation (with a higher risk in darker skin tones).10

• Incision and curettage.  This can be considered for chalazia that don’t respond to the above treatments. In many children, this procedure will have to be performed under general anesthesia. One small study in children demonstrated 75-percent success after first incision and curettage and 100-percent resolution after a second procedure; two cases had recurrence within one month of resolution.3 They also showed a 100-percent success rate after combined intralesional triamcinolone acetonide and incision with curettage.3 Despite high success, using the above treatments to prevent recurrent chalazia should be continued.

New treatments for BKC and chalazia continue to appear. Based on evidence that the intestinal microbiome modulates ocular inflammatory disease,26 one study found that oral probiotics with conservative treatment versus conservative treatment alone led to faster resolution of chalazia (28 versus 54 days) in children.27 More research is required for these preliminary findings, but we expect the treatment landscape to evolve in years to come.

Dr. Al-Lozi is an ophthalmology resident at Duke University School of Medicine.

14. Choi DS, Djalilian A. Oral azithromycin combined with topical anti-inflammatory agents in the treatment of blepharokeratoconjunctivitis in children. J AAPOS. 2013;17:1:112-113.

In the Dry-Eye Pipeline: Slow Progress

Dry-Eye Disease by the Numbers 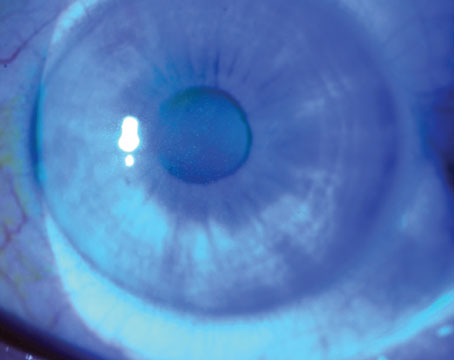 Dry Eye: What’s in the Pipeline?

Delving into the Dry-Eye Pipeline