The future of Beovu (brolucizumab, Novartis), the long-term anti-VEGF treatment associated with new reports of safety concerns, remains a source of uncertainty but continued hope among retinal specialists. On May 28, Novartis terminated three trials of shorter-term dosing of the injectable for the treatment of neovascular age-related macular degeneration. The MERLIN trial, which had been comparing the four-week dosing of 6-mg treatments of Beovu to the four-week dosing of 2-mg treatments of Eylea (aflibercept, Regeneron), was ended because of higher rates of intraocular inflammation, including retinal vasculitis and retinal vascular occlusion, the company said.

Novartis has also terminated the RAPTOR and RAVEN studies, which were evaluating the efficacy and safety of Beovu when used to treat retinal vein occlusion with a regimen that included six initial monthly injections. The action by Novartis didn’t affect Beovu’s continuing Food and Drug Administration approval of Beovu to treat nAMD at 8-to-12-week intervals after three loading doses. Some retinal specialists expressed uncertainty over Beovu’s future because reports of safety concerns were resurfacing a second time, following initial reports of IOI in the spring of 2020, less than six months after FDA approval.

“Beovu has superior drying performance compared to Eylea in challenging AMD cases,” says Steve Charles, MD,  clinical professor of ophthalmology at the University of Tennessee Hamilton Eye Institute. He adds, however, “the inflammation issue puts a cloud over the agent’s future. We were hoping for this agent to help with the treatment of DME, proliferative diabetic retinopathy and retinal vein occlusion.”

ASRS immediate past president Timothy G. Murray, MD, MBA, notes that the announcement by Novartis has left many retinal specialists feeling uncertain. “We’re uncertain at this point as to what it means going forward,” says Dr. Murray, who was ASRS president when the society’s ASRS Research and Safety in Therapeutics (ReST) Committee combed through Beovu’s pre-approval trial data to identify the initial concerns over IOI complications in 2020. He also served as an advisor to the Novartis Safety Review Committee, which further investigated the issues. After the SRC probe, Novartis concluded that there was a confirmed safety signal of rare adverse events. One of the findings showed that retinal vasculitis, retinal artery occlusion or severe vision loss occurred in 8.75 to 10.08 out of 10,000 injections (between February 28 and March 27 of 2020).

“I don’t think it was surprising to any of us that there were inflammatory alterations or cases of intraocular inflammation post-injection,” says Dr. Murray. “We had seen this tendency to a much lesser degree with the use of other advanced biologics. What we really hadn’t seen before was this vaso-occlusive phenomenon, of occlusive vasculitis.”

Meanwhile, he says, discussion through Novartis’ SRC also focused on the Phase III KESTREL and KITE studies of 6-mg doses of Beovu for treatment of DME compared to treatment with 2-mg doses of aflibercept. “There was some discussion as to whether those trials should continue or not, knowing that there was this issue of occlusive vasculitis,” he says. “It was decided to broaden the discussion with the patients enrolled in the studies during informed consent and to continue with the trials. Some specialists felt that was not acceptable and there’s been lot of contentious discussion. I feel differently. I treat a lot of patients with off-label indications because I have an unusual oncology practice, and I’m treating tumor patients or pediatric patients or really rare diseases, where there are no FDA drugs that meet those indications.”

On May 1, one-year results of the KESTREL and KITE studies showed both had met their primary endpoints of non-inferiority in change in BCVA from baseline for 6-mg treatments of Beovu versus 2-mg treatments of aflibercept at year one. In KESTREL, Beovu patients gained a mean of 9.2 letters versus 10.5 letters for patients receiving aflibercept, according to Novartis. In KITE, patients getting Beovu gained a mean of 10.6 letters versus 9.4 letters for patients on aflibercept. Ocular inflammation rates in KESTREL were 4.7 percent for brolucizumab 3 mg (including 1.6 percent retinal vasculitis), 3.7 percent for Beovu 6 mg (including 0.5 percent retinal vasculitis), and 0.5 percent for aflibercept 2 mg. IOI rates in KITE were equivalent (1.7 percent) between the Beovu 6 mg and aflibercept 2 mg arms, and no retinal vasculitis was reported. Retinal vascular occlusion was reported in KESTREL for brolucizumab 3 mg (1.1 percent) and 6 mg (0.5 percent), and in KITE for brolucizumab and aflibercept, at 0.6 percent. The majority of these events were manageable and resolved with or without treatment,  according to Novartis.

“Prior to the occlusive vasculitis issue, a lot of us looked at Beovu as the key to future success—a drug that’s more effective, lasts longer and reduces patients’ burden of care because of the extended, treatment-free periods it permits between injections,” says Dr. Murray.

Many of his colleagues don’t see it that way now. “A considerable number of retinal specialists have said they couldn’t use a medication which, unto itself, could cause a patient to lose vision,” he explains. “The incidence of vasculitis, once it was identified, was significant enough to be concerning. There has been an amazingly strong pushback from the retina community because we didn’t see this event occurring with the use of the other biologics we were using.”

Using the unchallenged FDA approval of Beovu for extended intervals between treatments, Dr. Murray says he believes retinal specialists will continue to inject the drug in appropriate cases. Taking a treat-and-adjust approach, he says patients who require more frequent treatments and respond well to them may actually benefit from the monthly intervals that were being studied for the possible treatment of persistent fluid in the MERLIN trial.

“Using clinical trial data, most physicians continue to individualize the care of their patients on a visit-to-visit basis, using OCT analyses, visual acuity, comparative review and patients’ subjective statements to decide when the next injection should be,” he says. “The position of ASRS hasn’t changed from the beginning. We don’t have guidelines for specific medications. The position is that physicians and their patients deserve as much knowledge as possible so that they have the ability to make informed decisions. What’s pushing this is patients who are unresponsive to other therapies and the need to treat some patients who can’t manage their burdens of care.”

Dr. Murray says the best hope for the future is identifying risk factors for the inflammation, vasculitis and retinal vascular occlusion found in some Beovu patients, possibly at a molecular level, to enable specialists to safely exclude them from receiving Beovu injections.

In a recent international, multicenter study conducted by the Icahn School of Medicine at Mount Sinai in New York City, researchers found that individuals with a genetic predisposition to elevated intraocular pressure face a threefold increase in their risk of developing glaucoma if they consume a large quantity of daily caffeine. The researchers were led by Louis R. Pasquale, MD, FARVO, deputy chair for ophthalmology research for the Mount Sinai Health System and system vice chair for translational ophthalmology research in the Department of Ophthalmology at the Icahn School of Medicine.

Previous work by this team demonstrated that the risk of POAG increases with high caffeine intake among those with a family history of glaucoma. This study refines that discovery by demonstrating that the relationship is only evident in individuals with the highest genetic risk scores for the disease.

Using data from the U.K. Biobank, a large-scale population-based biomedical database, researchers analyzed data from 120,000 individuals between ages 39 and 73 who provided their health records and DNA samples between 2006 and 2010. The participants periodically answered dietary questionnaires focused on their caffeine intake, via both drinks and caffeinated food. They also answered questions about their vision, including personal and family glaucoma history. Three years into the study their vision and IOP were checked.

The research team analyzed potential relationships between caffeine intake, IOP and self-reported glaucoma using multivariable analysis. Then, they included the genetic data by assigning participants an IOP genetic risk score and checking to see if this interacted with the other data. Findings included:

Elaborating on these findings, Dr. Pasquale notes that the different findings reflect different ways of looking at the data. “Keep in mind that well-designed acute intervention studies find that, on average, caffeine dosing equivalent to a cup of coffee produces an approximately 1-mmHg increase in IOP that lasts 60 to 90 minutes,” he says. “In our dataset we assessed the relation between habitual coffee consumption and a point estimate of IOP. Of course, caffeine is consumed throughout the day, not just at breakfast.”

Why the relatively small IOP difference between the high-risk, high-consumption group and the low-risk, low-consumption group, when there’s a nearly fourfold change in glaucoma prevalence between the same groups? “Remember the phrase ‘Every 1 mmHg counts in glaucoma?’ ” Dr. Pasquale says. “We suspect that exposure to a factor that causes mild increases in IOP throughout the day among genetically predisposed individuals culminates in a markedly increased glaucoma risk. We believe this explains the different impacts of high caffeine consumption on IOP vs. glaucoma prevalence.”

Dr. Pasquale admits that almost no patients currently know their individual burden of common genetic loci that are linked to elevated IOP or POAG. “Only a small number of patients know they harbor rare Mendelian variants that are strongly linked to glaucoma,” he says. “At the current time, a family history of glaucoma is the best surrogate to having that molecular information in hand, but that will change as this type of result reveals the power of polygenic risk-scoring in glaucoma.”

Dr. Pasquale says he believes this data is strong enough to warrant some lifestyle recommendations. “I think it’s reasonable to advise people with a family history of glaucoma to limit their coffee consumption to two cups per day,” he says.

What’s next for this research group? “We plan to examine whether there’s a relation between caffeine consumption and structural retinal biomarkers related to glaucoma, and whether this association is modified by a genetic predisposition to glaucoma,” he says.

A New Treatment for VKC Arrives 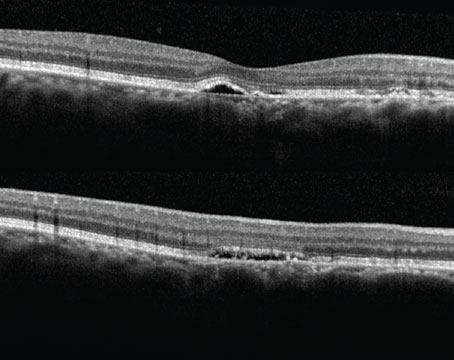