On July 1st, Aetna implemented a new policy requiring prior authorization for cataract surgery. Ophthalmologists, as well as the American Academy of Ophthalmology and the American Society of Cataract and Refractive Surgery, are up in arms, saying that this new policy is disruptive and burdensome and will result in delays in care for thousands of patients.

David B. Glasser, MD, the secretary for federal affairs at the Academy, says the policy is based on the belief that there’s a great deal of unnecessary cataract surgery being performed. “Aetna has told us they have internal data suggesting that about 4 to 5 percent of surgeries may be unnecessary, but they didn’t offer any details,” he says. “Historically, the number of unnecessary cataract surgeries isn’t zero, but it’s very low—about 2 percent, depending on the criteria applied. It doesn’t make sense to subject every single cataract surgery to prior authorization for a problem that constitutes only a very small percentage of surgeries.”

The policy change was announced in the spring, but Aetna failed to provide a way to obtain prior authorizations until just a few days before it went into effect on July 1, says Dr. Glasser. “It’s been inefficient,” he says. “We’ve already had reports of at least one emergency case that wasn’t approved, despite Aetna’s statement that emergency cases could be approved immediately through their 800 number instead of their online portal. We have real concerns that there may be poor outcomes due to delays in care.”

The case in question involved a patient with a cataract and retinal detachment requiring emergency surgery in Harrisburg, Pennsylvania. The cataract obscured the view of the posterior segment and retina. “Cataract surgery was initially denied,” Dr. Glasser says. “It could have been a couple weeks for approval to come through, and the patient couldn’t wait that long. The surgeon removed the cataract. In situations like this, we hope the surgeon would perform the surgery and deal with the insurance later, but this situation really isn’t acceptable.”

Review was unable to speak to an Aetna spokesperson for comment, but received instead a statement from the company that expressed Aetna’s outreach efforts to inform the ophthalmic community of the policy and reassure them that patients would receive “timely access to appropriate, necessary care.”

Previous communications with Aetna didn’t define what the company considered medically necessary, says Dr. Glasser. Review was also sent a link to Aetna’s cataract clinical policy bulletin, but the policy bulletin was last updated in April 2020 and revised in August 2020, so it’s unclear whether the criteria online reflect exactly the criteria for the July 1, 2021 preauthorization policy.

Dr. Glasser says the AAO has heard complaints about Aetna’s online portal rejecting approvals, requiring staff to go back and file more details. Refiling may take up to two weeks, he says. “We’ve heard from practices that need to schedule combined cataract and glaucoma surgery—not on an emergency basis—that are getting mixed messages from Aetna: The telephone folks say no precertification is needed, but the online portal says it is. There’s really a lot of confusion surrounding this.”

ASCRS and AAO have connected with the leadership at Aetna and are keeping lines of communication open. “We’ve reached out to our members with information they can give to their patients to explain this situation,” says Dr. Glasser. “We’re asking for support of a bill in Congress that will streamline and increase transparency of the preauthorization process and eliminate preauthorization for procedures that are routinely approved. We’re also asking members to ask patients who’ve had their surgeries rescheduled or are put out by this to write to their congressperson and let them know it’s affecting Medicare Advantage beneficiaries covered by Aetna.

“We talked to Aetna just a few days prior to the policy implementation and expressed our concerns,” Dr. Glasser continues. “They didn’t seem concerned, but now that it’s clear their system isn’t working well, hopefully we’ll be able to convince them they need to make significant changes.”

However, Terry Kim, MD, the immediate past president of ASCRS, told Review in mid-July that Aetna isn’t responding to them at all now. “Cataract surgery is one of the most successful ophthalmic procedures and medical procedures in general,” he says. “There’s a very high level of patient happiness. This move certainly sends the wrong message and limits access to surgical care. We don’t want other insurance companies to follow suit.”

“The bottom line is that we need to see this policy paused and ideally canceled,” says Dr. Glasser. “The program isn’t necessary, given the small number of cases that are likely to be denied. It’s going to be a waste of time and money for physicians and for patients who’ve been rescheduled and also have to change plans for family members to take them to surgery. We also think this policy won’t save Aetna much money with all the time and money they’ll have to spend administering it.”

The study’s authors concluded that clinicians, specifically those involved in delivery of cataract surgery and its follow-up care, should be aware of these findings in order to give their cataract surgery patients a more accurate prognosis. 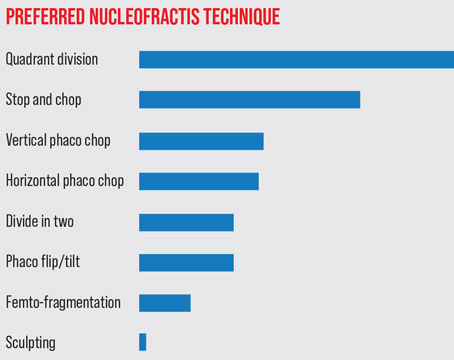 How to Manage Dislocated IOLs