Past treatments for serious medical retinal diseases such as agerelated macular degeneration or central retinal vein occlusion were largely limited to ablative laser or challenging surgical intervention. The approval of Macugen, an aptamer specific for VEGF 165, in 2004 heralded the beginning of a new pharmacological/ biological era for retinal therapy. The successful development of Macugen was made possible by the identification of vascular endothelial growth factor as an important contributor to neovascular complications of so-called wet AMD. Lucentis, an FAB2 portion of anti-VEGF antibody, was approved for wet AMD in 2006, demonstrating not only stabilization of vision in wet AMD patients, but also the improvement of vision in a substantial proportion of patients.

Even before Lucentis was approved, investigators were exploring the therapeutic use of another anti-VEGF biologic, Avastin, a full anti-VEGF antibody approved for oncology, for the treatment of wet AMD with positive results reported in multiple studies. Each of these “antibody-like” anti-VEGF products is effective in providing therapeutic benefit in patients. However, each of these products requires monthly or at least frequent intravitreal administration for maximal patient benefit, a requirement that places a large burden on patients, their families and clinicians.


A Different Approach
Gene therapy offers a different approach to ophthalmic therapies that can offer significant benefits to patients with regard to safety, efficacy and convenience. The current interest in ocular gene therapy has been stimulated by early success in a gene therapy under investigation for an inherited blinding disorder, Leber’s congenital amaurosis type 2 (LCA2). First described in the 19th century, LCA2 is associated with an abnormality in the gene RPE65, which normally codes for a protein required for photoreceptor cell function. It is also associated with a mutation in the RPE65 gene in dogs in the late 1990s. Successful AAV RPE65 gene therapy in the dog model set the stage for human clinical trials. 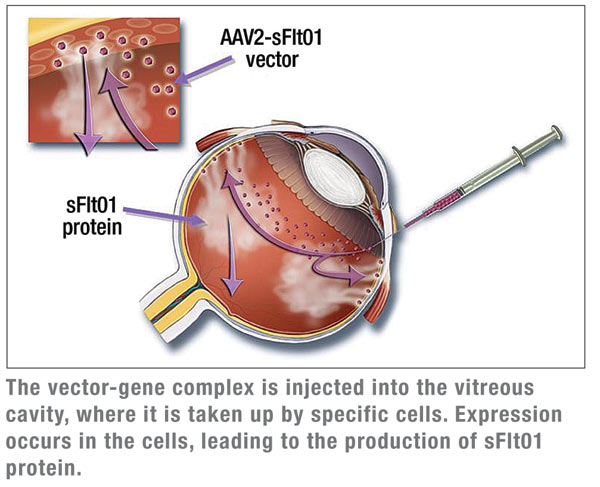 Clinical trials in LCA2 began in 2007, with three different clinical trials being conducted simultaneously. The animal studies and the clinical studies employed the sub-retinal route of administration as this was the only known route for delivery to the cells of the RPE. Gene therapy clinical trials are routinely carried out in patients, as opposed to normal volunteers. Demonstration of safety is the primary objective of early-phase trials. The first subjects were young adults with LCA2 who were legally blind. Remarkably, in addition to demonstration of safety to date, subjects in each of the different clinical trials experienced some improvement in vision, ranging from an improvement in ability to navigate to increased sensitivity to light. The LCA2 clinical trials are continuing with the hope and promise of bringing LCA2 gene therapy to approval and to the benefit of affected individuals.


AAV Gene Therapy
Building on the success of LCA2 gene therapy, AAV, or adeno-associated virus, gene therapy is being contemplated and planned for other monogenic blinding disorders. In addition, gene therapy technology is being explored for additional ocular disorders beyond monogenic disorders. Genzyme is attempting to combine the proven mechanism of anti-VEGF therapy with the attractive features of AAV gene therapy for the benefit of wet-AMD patients.

As mentioned above, the benefits of VEGF neutralization have been proven clinically in several trials. However, frequent, if not monthly, intraocular injections are required for maximum patient benefit. The therapeutic agent under evaluation in the Genzyme clinical trial is AAV2 sFLT01, a gene therapy vector encoding an anti-VEGF protein based on VEGF receptor 1. This modality offers the potential of significant treatment durability, perhaps in the range of a year or greater. The Genzyme approach is to employ the intravitreal route of administration of the AAV2 sFLT01 vector, as opposed to the sub-retinal route employed in the LCA2 trials. Sub-retinal surgery for vector administration for blinding disorders with no therapeutic option can obviously be done, but would best be avoided in wet AMD patients, if possible. Moreover, retinal specialists who are treating patients with anti-VEGF biologics are routinely utilizing the intravitreal route of administration.

To prepare for AAV2 sFLT01 clinical trials, an extensive series of efficacy and safety testing in animals was completed in rodents and in non-human primates. Key findings in non-human primates were the demonstration of expression of the sFLT01 anti-VEGF protein for more than a year and efficacy in the challenging laser CNV model.

A multicenter, non-controlled, dose-escalating Phase 1 safety trial is under way. Patients with advanced exudative AMD (fibrosis or disciform scarring with presence of intraretinal or subretinal fl uid) are eligible. Patients are treated with a single intravitreal injection of AAV2- sFLT01 in cohorts of three subjects, with an additional three patients enrolled if evidence of toxicity is seen in one of the first three. Toxicity in two or more patients in a single cohort of up to six patients would lead to the maximum tolerated dose. At this point, additional patients with less-severe exudative AMD would be enrolled in a second phase of the trial, looking primarily at safety, but with efficacy being a secondary outcome. Multiple safety parameters are being assessed in the trial. Surrogate endpoints for efficacy include retinal thickness as measured by ocular coherence tomography, as well as direct measurement of expression of the SFLT01 protein in the aqueous humor. Initial results of the trial should be available in early 2012.