Review of the patient’s original CT scan demonstrated soft tissue abnormalities inconsistent with TED (See Figure 2). Because of these atypical findings, additional laboratory testing and neuroimaging was ordered. Thyroid function tests were within normal limits, as were thyroid stimulating immunoglobulin (TSI), angiotensin converting enzyme, and anti-neutrophil cytoplasmic antibody (ANCA). MRI showed enlarged right medial and inferior rectus muscles, with significant irregularity of the intraconal soft tissue (See Figure 3). On the left, there was enlargement of the medial rectus with nodularity of the muscle contour.

Given the atypical clinical and radiologic findings and lack of thyroid dysfunction, the patient underwent right orbitotomy with biopsies of the involved orbital fat and inferior rectus muscle.

Histopathology demonstrated an atypical lymphoid proliferation (See Figure 4). Flow cytometry confirmed a population of surface kappa-biased B cells positive for CD19 and CD20, and negative for CD5 and CD10. This was consistent with an extranodal marginal zone lymphoma of mucosa-associated lymphoid tissue (EMZL/MALT). The patient underwent PET/CT imaging for staging and was referred to an oncologist for further management. The PET/CT revealed increased standardized uptake values (SUVs) in the region of the extraocular muscles in addition to the left axillary lymph nodes, consistent with stage T2a EMZL/MALT.

Because of the stage of his disease, the patient underwent three cycles of systemic therapy with rituximab and bendamustine. Orbital swelling clinically improved and a repeat PET/CT demonstrated a decrease in both size and SUVs of the extraocular muscles and left axillary lymph nodes.

Although extraocular muscle pathology is often associated with thyroid dysfunction, it is important to consider other causes, such as inflammatory, vascular or neoplastic processes. In a series by Lynnette Watkins, MD, and colleagues, 45 cases of lymphoma of the extraocular muscles were described. The most common presenting signs were prop-tosis (53 percent), extraocular motility limitation (32 percent) and ptosis (14 percent). The most common symptom was diplopia (34 percent). Eighty-six percent of these lymphomas were B cell and 44 percent of these were EMZL/MALT. At presentation, four patients had lymph node involvement and six patients had widespread disease. Interestingly, almost 10 percent of patients were previously misdiagnosed as either TED or idiopathic orbital inflammation.

Ocular adnexal lymphoma is a monoclonal proliferation of lymphoid cells, usually of B-cell origin. This is postulated to occur from dysregulation in immunomodulation and chromosomal mutations that eventually select for a predominant monoclonal population. The process appears be tied to either chronic antigenic stimulation or autoimmune disease. Monoclonality derives from a precursor B-cell (or T-cell) at a specific phase of maturation. Lymphoma subtypes can be classified according to the recently updated 2008 WHO classification. Importantly, each lymphoma subtype carries independent prognostic and treatment implications and should be considered as a distinct entity. Put succinctly, indolent ocular adnexal (OA) EMZL/MALT differs significantly from more aggressive and life-threatening subtypes, such as diffuse large B-cell and mantle cell lymphomas.

EMZL/MALT occurs at a median age of 65 years and most commonly involves the orbit, followed by the conjunctiva, lacrimal gland and eyelid. As mentioned, it typically has an indolent course, lacks systemic involvement at diagnosis and carries a favorable prognosis. However, outcomes are dependent on stage at diagnosis, and distant relapse is not uncommon. Corticosteroids can mask clinical presentation and histopathology, potentially resulting in a delay in definitive diagnosis. Various treatments for OA-EMZL/MALT are available, but no optimal treatment approach has been defined. For localized OA-EMZL/MALT, radiation therapy is typically utilized. For patients with regional extension or widespread disease, systemic chemotherapy is administered as either single-agent or combination therapy.

Newer therapies include immunotherapy (e.g., rituximab) and radioimmunotherapy, with further investigations under way. It is also important to remember that since OA-EMZL/MALT tends to follow a relatively indolent course, in some fragile, elderly patients with significant comorbidities, conservative observation is an acceptable alternative to systemic therapy. Ultimately, the single most important feature in the management of OA lymphoma is the subtype of the tumor.

Given the ubiquity of thyroid dysfunction in the general population and the fact that the majority of extraocular muscle enlargement is indeed due to TED, it is not surprising that ophthalmologists generally ascribe all muscle enlargement to TED.

Alternative diagnoses should be considered when the patient exhibits atypical clinical or radiologic features, including persistent euthryoidism, lack of upper eyelid retraction or adduction deficits on extraocular motility examination (the vast majority of TED external ophthalmoplegia presents with some combination of abduction and vertical duction deficits). Atypical radiologic features on CT or MRI include isolated lateral rectus muscle enlargement, nodularity of the enlarged muscles (“bumpy muscles”) or significant infiltration of the intraconal fat. In such cases, biopsy of the involved tissue should be strongly considered before instituting empiric corticosteroid or radiation therapy. 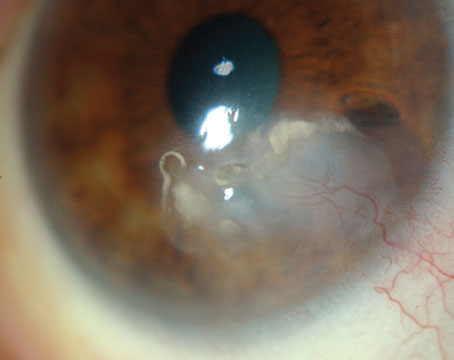