Diagnosis, Workup and Treatment
This patient with gradual, painless, blurred vision OD was found to have a unilateral hyperopic shift of 1.5 D from an underlying choroidal mass.

The differential diagnosis for a unilateral hyperopic shift includes mechanisms that flatten the cornea, shift the lens posteriorly, or shift the retina anteriorly.

The clinical history and features were suggestive of choroidal metastasis. Further questioning revealed a history of breast cancer five years prior with metastases to the lung and bone. He had undergone mastectomy, chemotherapy, radiation, and Tamoxifen therapy and was in remission for the previous three years.

The patient was found to have other sites of active metastasis in the lung and bone marrow as well. Treatment with systemic chemotherapy agents was planned. Given the progressive visual loss, local plaque radiotherapy for the choroidal metastasis was performed.
By six months follow-up, the metastasis had regressed to a flat atrophic scar and visual acuity was 20/300. Further small choroidal metastases were detected in each eye and the patient was continued on chemotherapy. 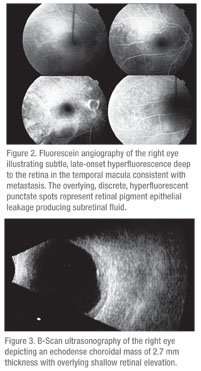 Risk factors for the development of breast cancer in males include the presence of or family history of BRCA1 or BRCA2 mutations, a history of estrogen exposure or androgen insufficiency, exposure to radiation and occupational exposure to high heat environments.

A thorough history, physical exam, laboratory evaluation and imaging evaluation will rule out other systemic metastases. Fine needle aspiration biopsy (FNAB) can be used to confirm the diagnosis of metastasis if primary cancer is unknown. There are few risks associated with FNAB. In a study of 159 FNABs for suspected intraocular tumors, the most common complication was subretinal hemorrhage in 13 percent of patients.6

Plaque radiotherapy is usually reserved for solitary metastases. The average life expectancy for patients with choroidal metastases is less than one year.

Complications from plaque radiotherapy are similar to those of external beam and other radiation therapies, including radiation retinopathy, papillopathy, and cataract. These side effects are uncommon, especially given the short life expectancy of many patients.7


The author would like to thank Carol Shields, MD, Wills Eye Institute Ocular Oncology Department, for her time and assistance.

A short history of blurred vision prompts a patient to seek an exam, which reveals a subretinal lesion. Read More
Ocular Disease