Diagnosis, Workup and Treatment
It is very important to determine if this patient’s visual loss involved the right eye or the right field of vision. This distinction is often difficult for patients to determine, unless they have covered each eye alternately. This patient had determined, by cross-cover, that the visual loss was just in his right eye. Knowing this fact constricts the differential diagnosis to conditions affecting only the right eye.

Determining the nature of the vision loss is important as well. The patient very clearly and reliably described his visual change as that of a “white cloud.” This was not a black out—the patient had not lost all sight. Vision gradually recovered over a period of hours as the white cloud became less dense. This type of visual loss is not typical for amaurosis and cannot be easily explained on the basis of ischemia. Instead, all evidence points to transient obscuration of the media of the right eye.

The complete rapid recovery of vision between episodes, the absence of typical systemic symptoms, and a normal-appearing optic nerve make GCA a less likely cause. The monocular nature rules out vertebral basilar insufficiency, and the character of vision loss makes other ischemic phenomena highly improbable. Loss of vision did not occur only in certain positions of gaze, ruling out compression from an orbital mass. Intermittent angle closure can cause symptoms such as those noted, but would be highly unlikely in a pseudophakic patient.

The only reasonable diagnosis in this patient is transient “debris” in the media. This can occur with massive release of pigment in certain types of uveitis, most notably herpetic, or with bleeding into the anterior chamber or the vitreous. With vitreous bleeding, however, clearing does not occur rapidly. Possibilities include Fuchs’ Heterochromic Iridocyclitis, eosinophilic granuloma, and, most probable here, Uveitis-Glaucoma-Hyphema (UGH) Syndrome. Gonioscopy is key to this diagnosis, especially after the vision has cleared. Seeing blood in the inferior angle is diagnostic. Occasionally gonioscopy also permits noting a misplaced haptic or an iris or ciliary body lesion.

The patient was started on brimonidine in his right eye and ultrasound biomicroscopy was performed. UBM was not classic for UGH, as there were no obvious areas of contact between the IOL-bag complex and the posterior iris. However, there were two suspicious areas, one where there was an Elschnig pearl at 6 o’clock (See Figure 1) and another with a membranous cyst at 12 o’clock (See Figure 2). Both were in close proximity to the posterior iris surface. There was also a suspicion that the temporal haptic was abutting the ciliary processes. Given the high clinical suspicion for UGH, surgery was planned for IOL repositioning or exchange.

During surgery, it was confirmed that the IOL optic and haptics were completely intracapsular; however, there was very little zonular support. The IOL rotated freely with even minimal manipulation and actually subluxed during the surgery. The entire IOL-bag complex was removed and an ACIOL inserted. Postoperatively, the patient did well, with best-corrected visual acuity of 20/30 and no additional episodes of vision loss. 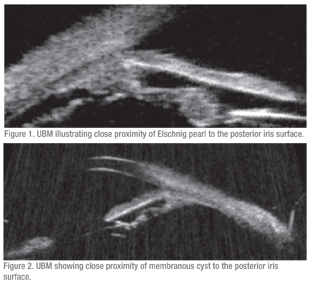 Discussion
Originally described in 1978 as a complication of intraocular chafing by first generation anterior chamber IOLs, UGH syndrome is now more commonly seen with posterior chamber IOLs. This may be due to the less-frequent use of ACIOLs or their improved design. UGH syndrome is caused by poor IOL positioning that results in chafing of uveal tissue by the IOL-bag complex. In one case series of UGH patients, the most common sites of contact were the iris pigment epithelium (50 percent) and the pars plicata (38 percent). Time from IOL insertion to onset of symptoms can be quite variable, ranging from one week to eight years in the same case series.

Symptoms of UGH include rapid reduction in vision over several minutes with gradual resolution over hours to days. Vision loss is typically described as a clouding or blurring of vision (“white out”). There is never complete loss of light perception in UGH. Some patients may have an ache in the affected eye, and some may complain of a reddish tinge to their vision (erythropsia). It is important to note that not all three components of the syndrome are needed to make the diagnosis.

Diagnosis of UGH can be difficult if the patient is not examined during an active episode of vision loss, and misdiagnosis and unnecessary testing are common. The presence of fresh or clotted blood in the anterior chamber angle inferiorly is diagnostic. Our patient went undiagnosed for one year, and it was not until he presented during an actual episode that the diagnosis was made. As a consequence, he was diagnosed and treated for GCA, and was also worked up for stroke, vertebrobasilar insufficiency and amaurosis fugax.

It is especially important to differentiate UGH from amaurosis fugax, which is the most common cause of transient monocular vision loss. There are several case reports of patients with UGH who were initially diagnosed with and treated for amaurosis fugax. Many of these patients were treated with aspirin, and one was even started on warfarin. These aberrant treatments increased the severity and frequency of their symptomatic episodes of microhyphema.

There are several key features that help to distinguish vision loss due to UGH from that due to amaurosis fugax. In amaurosis, patients experience complete loss of light perception in at least one section of their visual field, while UGH patients experience a generalized clouding of their vision, but never with complete loss of light perception. Onset and resolution are also much more rapid in amaurosis fugax, on the order or seconds to minutes, as opposed to hours to days in UGH. The key to differentiating UGH and amaurosis fugax begins with a thorough history of the timing and nature of vision loss and then examining the anterior chamber angle.

In the past it was believed that UGH did not occur when the IOL was completely intracapsular; however, this is not true. The first report of UGH in the setting of complete intracapsular fixation of the PCIOL occurred in a case where an iridociliary body cyst was present that was chafing the posterior iris surface. Our patient may represent a similar scenario where complete intracapsular fixation was confirmed at the time of surgery and there was documented proximity of an Elschnig pearl and a membranous cyst to the posterior surface of the iris.


The author would like to thank George Spaeth, MD, Wills Eye Institute Glaucoma Department, for his time and assistance.

A short history of blurred vision prompts a patient to seek an exam, which suggests 'debris' in the ocular media. Read More
Ocular Disease

A young and healthy patient’s mishap at a rock concert leads him to seek treatment at Wills. Read More