Detecting and monitoring progression is a key part of managing glaucoma, but the difficulty of doing this changes as the damage caused by the disease increases. It’s particularly challenging to detect changes in eyes with severe glaucomatous damage because there are very few progression endpoints to monitor at that stage. That’s especially true in eyes with totally cupped optic nerves, diffuse loss in the visual field and severe atrophy of the retinal nerve fiber layer. However, monitoring progression in eyes with advanced disease is still possible.

A number of considerations are important for clinicians to recognize when trying to detect change in eyes with severe glaucoma. Here, I’ll review some of the key issues you may encounter in this situation and offer some suggestions for successful monitoring of the disease, despite the obstacles.

To begin, it’s important to establish a useful way to define severe glaucoma. For a number of years, clinicians used the Hodapp-Parish-Anderson classification, in which severe disease was defined as having a visual field mean deviation value worse than -12 D of attenuation. However, in 2011, the ICD-10 classification created new glaucoma severity staging codes with a different definition. Severe glaucoma was then defined as either (or both) of two things: having visual field loss in both the superior and inferior hemifields, and/or having visual field loss in the central five degrees. This definition is currently favored by clinicians. (Note that having damage in the central five degrees is much more common than many people realize—particularly in eyes with low-pressure glaucoma, which often develop paracentral scotomas. In the United States, low-pressure glaucoma represents between 30 and 50 percent of all cases of open-angle glaucoma.)

To understand the difficulty of monitoring progression in patients with advanced glaucoma it’s important to understand the concept of the floor effect. The “floor” is the level for any given technology below which further disease-related changes become undetectable.

All measurements have a floor effect. In visual fields, when the MD becomes worse than -20 dB, one has typically reached the floor. (Aids to monitoring progression such as GPA generally become useless at this stage.) With SD-OCT imaging, when the average retinal nerve fiber layer thickness reaches between 50 and 60 µm, that’s believed to represent the floor. The practical issue here is obvious: Once no further change can be measured, the technology loses its usefulness as a means to monitor worsening of the disease.

Fortunately, even though the visual field mean deviation and average retinal nerve fiber layer measured by OCT may reach a floor, localized changes can still be detected, both with perimetry and OCT imaging. For that reason, it’s important to understand that alternative measurements with both technologies should be incorporated when managing these patients. In terms of visual field testing, that usually means testing the central 10 degrees, a very useful strategy for detecting change in eyes with severe glaucoma. A central 10-degree visual field captures 68 points in the center of the visual field, allowing one to continue to detect change over time by analyzing changes in central sensitivity values. In terms of OCT, macular imaging is very useful for detecting structural changes in eyes with severe glaucoma. Furthermore, changes in the central 6 mm of the macula show excellent correlation with changes in the central-10-degree visual field.1

Another important consideration to keep in mind when monitoring patients with severe glaucoma is that structural and functional measurements often don’t coincide. In 2019 our group published a study in Ophthalmology Glaucoma, in which we examined the structure-function relationship in 147 glaucomatous eyes that were followed for a minimum of three years with serial visual field testing, retinal nerve fiber layer imaging and macular OCT imaging.2 We found that in eyes with severe glaucoma—as defined by the ICD criteria—there were significantly more OCT progression endpoints than there were visual field progression endpoints. Furthermore, detecting progression using all three modalities in the same eye was uncommon, occurring in approximately 7 percent of eyes.

Typically, one can expect to see either structural progression or functional progression. Methods for progression detection frequently disagree, for a number of reasons. For one thing, the analysis methods used by these technologies differ; for example, regions examined using OCT imaging may not correspond to the areas tested by perimetry. There are also differences in the measurement floors with these technologies. In addition, there’s a higher prevalence of artifact and variability when measuring eyes with severe glaucoma. That’s because the damage in these eyes results in a reduced data signal, both in terms of visual field sensitivity and retinal nerve fiber layer thickness values, causing the algorithms to fail more often.

Another factor that may confound the agreement between measurements is whether you’re looking for progression using an event-based strategy or a trend-based strategy. (Trend-based analysis tracks a measurement over time to determine the rate of change; event-based analysis looks at a specific measurement and compares it to a baseline measurement to see whether or not a given change has occurred.) Each of these analysis strategies has strengths and limitations, and while both approaches can be valuable, they’ve been shown to disagree fairly often.3

To be able to continue monitoring a patient with advanced glaucoma, these strategies will help:

• Incorporate ancillary diagnostic testing. There are a number of options available when looking for progression, and changing the strategy you’re using may extend your ability to detect progression despite a significant amount of damage. Central 10-2 visual field testing is essential for serial monitoring in eyes with severe glaucomatous damage. In eyes with extensive visual field loss, using a larger size visual field stimulus (size V) is helpful. In eyes with significant peripapillary RNFL thickness atrophy, where the measurement floor has been reached, performing serial macular OCT imaging to monitor the ganglion cell-inner plexiform layer is recommended.

• Perform confirmatory testing. Detecting true progression requires confirmatory testing. This is true at all stages of glaucoma severity. Eyes with severe glaucoma have greater variability in test results, particularly in their visual fields, which means you’ll encounter more artifacts. Repeated testing can help to compensate for that.

• Remember that structural and functional assessments may disagree. It’s uncommon to see signs of progression using both OCT and visual field testing in an eye with advanced glaucoma.2 You’re more likely to detect progression using one type of testing rather than both. So, if you find evidence of progression on one test, check to make sure it’s good-quality data. If the data is reliable and confirmed with repeat testing, it suggests true biological progression.

• Use surrogate endpoints for progression. In many eyes with severe glaucoma you may find there are no more standard progression endpoints to follow. The optic nerve may be totally cupped, the visual field severely depressed and the nerve fiber layer and macular thickness values all at their measurement floor. However, other indicators may still be useful for detecting that the eye is getting worse. These include:

— subjective reporting by the patient, who may describe progressive vision decline or “darkening” of vision;

— optic disc hemorrhages. These have been shown to be one of the most important predictors of progression. Eyes with severe glaucoma develop disc hemorrhages less frequently than eyes with early-to-moderate-stage glaucoma, due to the significant neural atrophy, but their presence is an indicator of ongoing glaucomatous injury.

Dr. Singh is a professor of ophthalmology and chief of the Glaucoma Division at Stanford University School of Medicine. Dr. Netland is Vernah Scott Moyston Professor and Chair at the University of Virginia in Charlottesville.

Dr. Greenfield is the Douglas R. Anderson Distinguished Chair in Ophthalmology, a professor of ophthalmology and vice-chair for academic affairs at the Bascom Palmer Eye Institute, University of Miami. 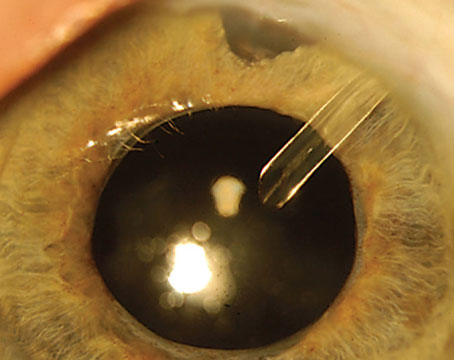 Canaloplasty: Getting The Details Right

Association Between Myopia and POAG/IOP

The Impact of Systemic Medications on Glaucoma