While traditional diffractive presbyopia-correcting lenses split light into multiple zones of vision or into microsteps to produce an elongated zone, the non-diffractive Vivity changes the shape of the wavefront as it passes through the lens. “This wavefront-shaping optical principle creates a stretching of light which produces a sort of extended-depth-of-focus channel as it hits the retina,” says Brandon Baartman, MD, of Vance Thompson Vision in Omaha, Nebraska. He took part in the U.S. clinical trial as a surgical fellow.

“Essentially,” he explains, “you’re taking a single point of focus and elongating it into a line by bending light using anterior surface transition elements so that not all the light enters in the same way, as it would for a monofocal, or splitting light as it would for a diffractive optic.”

The U.S. clinical trial included 220 patients who received either the SN60WF monofocal (n=113) or Vivity IOL (n=107) .1 Vivity demonstrated a greater negative range of binocular defocus compared to the monofocal at six months in the U.S. and outside the country (n=282) clinical trials.2 No persistent adverse events occurred within the study period in those implanted with Vivity.1

Alcon says this lens delivers “monofocal-quality distance vision with excellent intermediate and functional near vision.” Dr. Baartman says that, in the trial, the lens was able to meet the primary endpoint of noninferiority in BCDVA compared to the monofocal.

“The most impressive outcome of the study was the difference between the Vivity and monofocal groups in reported quality of distance and intermediate vision in dim lighting,” he says. “Eighty-three percent of patients in the Vivity group said they had good distance and intermediate vision without glasses in dim lighting, compared to 51 percent of the monofocal group.”

Additionally, based on the FDA data from 107 Vivity patients, Dr. Baartman says this lens had a similar dysphotopsia profile to the monofocal lens.

Dr. Baartman has used a variety of the Vivity toric lenses, as well as the spherical lens, and he says he’s gotten good results. “It’s likely not going to give your patients 20/20 near vision, but it can offer better spectacle-free functionality for patients who are a little more sensitive to photoptic phenomena and desire excellent distance and intermediate vision.”

In mesopic conditions, Vivity demonstrated lower monocular contrast sensitivity compared to the monofocal lens in a trial conducted outside of the United States.2 Alcon includes a warning about this in the package insert. Dr. Baartman points out, however, that the clinical relevance of this finding may be limited since binocular contrast sensitivity wasn’t tested in this trial.

“This isn’t a lens to put in everybody, because not everyone will want this type of correction,” he continues. He advises implanting this lens for those who feel OK about wearing reading glasses after surgery for near work, or for those who are too particular about their vision for a true multifocal lens: those bothered by postoperative dysphotopsias or those who do a lot of night driving.

“I think this lens has a broader application just by nature of its not being a diffractive lens,” Dr. Baartman says. “You may be able to include mild glaucoma patients who are stable at the time of cataract surgery and do a combined MIGS procedure. Another possible application, though I haven’t used it extensively for this, could be for use patients with less-than-perfect corneas, possibly post-refractive surgery corneas, and even post-radial keratotomy patients. The extended-depth-of-field channel may theoretically reduce some of the fluctuations in refractive error by creating a larger ‘landing zone’ of good-quality vision in those patients. Also, patients with mild epiretinal membrane, who might be held back by the need for a perfect macula that’s needed for a true diffractive intraocular lens to hit a home run, might benefit from this lens.”

Correction: In the print edition of this article, there was a typo that stated the lens is available in -0.5 D increments, instead of 0.5 D increments. Review regrets the error. 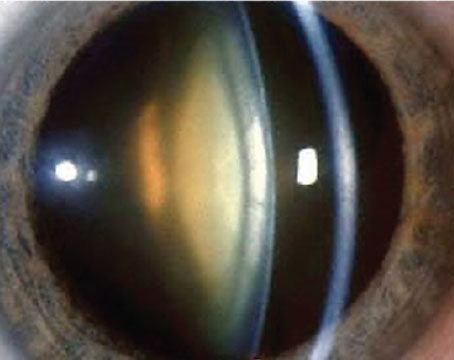