I joined the retina faculty at the Kresge Eye Institute, Wayne State University in Michigan after my fellowship at Duke. After almost six years, I returned to Duke and can remember very vividly my first day back in the OR.
Surgeons can be very particular about a systematic approach to pathology, instrumentation, machines used, lighting, visualization and supporting staff. Some nervousness would not be unexpected on this first day back, with a change of operating environment, and working with a first-year fellow, despite prior experience and some familiarity with the Duke operating rooms. My best consolation was Irma showing up that day to assist me. She was one of most experienced scrub nurses who used to assist Robert Machemer and Brooks McCuen.

Our patient presented with recent onset of extensive submacular hemorrhage, and I was planning to inject a combination of subretinal tPA and Avastin following pars plana vitrectomy. I felt it would be safer for me to inject while the fellow had the subretinal cannula tip in the subretinal space. I checked the line and withdrew the tPA and Avastin myself. I was planning to inject a larger volume to bathe the clot for a better displacement. The fluid went in nicely to the subretinal space but suddenly air bubbles entered the subretinal space, with rapid elevation of the macular detachment. What should I do now? I did not want to go back and try to remove the air from under the macula. I thought to leave it as is, since it’s not gas and no traction existed, so it may resorb spontaneously. I could not sleep that night and felt it wasn’t the best way to start back at Duke!

Next day, it was that moment of truth when I went in to see the postops. The fellow said: “You’re not going to like this; the air is in the submacular area, which is detached!” Well! I was hoping the air would go to a different location, but what I saw amazed me. Indeed air was under the macula, but where was the blood? It was completely displaced far inferiorly. We examined the patient every day thereafter and within four days, air completely resolved, the subretinal blood stayed way inferiorly and vision recovered to the pre-bleeding level. I had never seen that much displacement away from the macula and I felt the urge to investigate this effect further.

After reviewing the forces acting on the subretinal hemorrhage from prior publications by Harvey Lincoff, it was obvious that air can change the vector for a better displacement. Think of air bubbles in a swimming pool or while scuba diving; those bubbles always move to the top of the pool; but imagine if the top is sealed and the walls are slightly distensible: Air will still move to the top and have to displace fluid underneath to the bottom and sides.
After a long thought process and analysis of those forces (See Figure 1), I purposely injected air in the subretinal space of subsequent cases. Displacement was again amazing, with recovery of most visual function and clearing of the macular area of any blood, also helping recovery not only of foveal function but of the central visual field (See Figure 2). Fluid-air exchange and SF6 gas 20%, non-expansile, with partial fill was required to keep the submacular air in the macular regionwhile the patient sat at the end of the procedure (See Figure 1). Without gas in the vitreous cavity, air can migrate superiorly and detach the superior neurosensory retina. SMH would follow and therefore would stay in the macular area.

We reported our initial experience for the first time at the Vail Vitrectomy meeting in 2013 and published later on that year.1,2 Since then, many surgeons worldwide have adopted the technique. Some thought that they had accidentally injected air during their cases but never thought of researching the principles of better displacement. Japanese surgeons reported their experience with the technique more than a year later in a prospective study with 100-percent displacement and great visual outcomes.3

Many surgeons in the United States have adopted the technique, especially early on in North Carolina, where we have discussed it intensively at the NC Retina Club meetings. Retina surgeons in private practice and academics alike feel the technique is pretty simple since they have already been displacing SMH but just need to add the air. I had the pleasure of discussing with many surgeons around the world on the phone the day prior to the planned surgery and received great feedback and very encouraging results.

Following the initial experience, the technique has evolved for the past three years. Macular holes can be very common in cases of large SMH and are easy to induce, with and without air injection. I have since changed the injection site to just inside the inferior arcade in all cases (See Figure 3). With the direction of injection inferiorly, the bleb of subretinal fluid is formed of tPA and Avastin followed by the flow of air in the subretinal area. Since patients are supine during the procedure, air flows to the inferior ora (See Figure 4). This prevents that initial rush into the subfoveal air, avoiding hole formation. When patients sit at the end of the procedure, air migrates up to the submacular area and is kept from moving more superiorly by the partial gas fill. Any head position between sitting up and chin down allows the subretinal air to massage the submacular area from any hemorrhage for complete displacement. The air also keeps the macular area detached for few days, allowing more time for subretinal tPA to liquefy the clot for better displacement. Air may hypothetically also provide more oxygenation to deprived photoreceptors; hence the level of improvement in visual function approaches vision prior to the hemorrhage. Patients with mainly subretinal pigment epithelial hemorrhage also have benefited from the mechanical effect of air flattening the PED with vision recovery. Many patients had recurrent bleeding and were displaced two more times with successful recovery; this is difficult to achieve just with injections.

Surgeons who have tried adding air to the subretinal mixture of fluid realize how they can achieve better displacement away from the fovea (See Figure 2) and have continued adopting this simple technique. We are currently working on gathering information from many surgeons with initial early experience, and those results will be shared soon with the retina community.

The culture created by Robert Machemer and Brooks McCuen still exists nowadays at Duke. Careful observation in the OR, understanding surgical concepts, and discussing techniques and complications are keys to advancing vitreoretinal surgery.  REVIEW

Dr. Mahmoud is an associate professor in the Department of Ophthalmology, and program director of the vitreoretinal fellowship at Duke University Eye Center, Durham, N.C. Contact him at thmahmoud@yahoo.com.

Will Ophthalmology Cripple You? 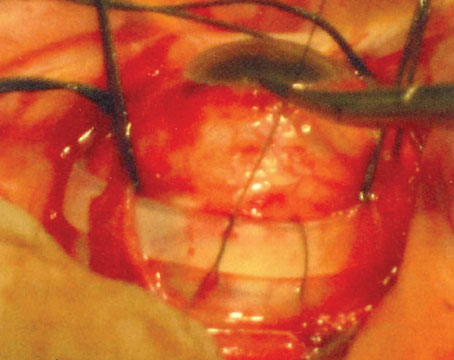 Make the Most of Your Residency

My "10 Commandments" for Strabismus Surgery

Keys to Success as a Corneal Surgeon