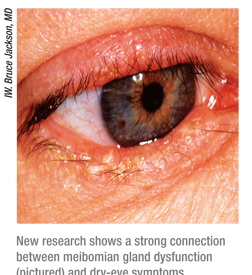 A Spanish study shows that meibomian gland dysfunction is strongly associated with the symptoms and signs of dry eye. To investigate the relationship of MGD and other prevalent ocular diseases with dry eye in a general adult population, researchers studied an age-stratified random sample of 1,155 subjects aged >40 years. Out of 937 eligible subjects, 654 (69.8 percent) participated. The mean age was 63.6 (SD, 14.4) years; the mean range was 40 to 96; and 37.2 percent of the subjects were male. A standardized dry-eye questionnaire was administered. Objective evaluation included the Schirmer test, tear-film breakup time, fluorescein staining and rose bengal staining. Dry eye was defined as the simultaneous presence of symptoms and at least one sign. The relationship of MGD and other ocular diseases with dry eye was investigated. A design-based analysis was performed, and all calculations were weighted to give unbiased estimates.


Acupuncture Effective Against Anisometropic Amblyopia
Acupuncture may produce an equivalent treatment effect for anisometropic amblyopia, compared with patching, and was statistically superior, say researchers at Joint Shantou International Eye Center of Shantou University and the Chinese University of Hong Kong. The single-center randomized controlled trial included children aged 7 to 12 years who had worn optimal spectacles for at least 16 weeks. Eighty-eight eligible children with an amblyopic eye who had a best spectacle-corrected visual acuity of 0.3 to 0.8 logMAR at baseline were randomly assigned to receive two hours of patching of the sound eye daily or five sessions of acupuncture weekly. All participants in the study received constant optical correction, plus one hour of near-vision activities daily, and were followed up at weeks five, 10, 15 and 25. The main outcome measure was BSCVA in the amblyopic eye at 15 weeks.

The mean BSCVA of the amblyopic eye at 15 weeks improved from baseline by 1.83 lines in the patching group and 2.27 lines in the acupuncture group. After baseline adjustment, the mean difference of BSCVA between the two groups was 0.049 logMAR (95 percent confidence interval, 0.005 to 0.092; p=0.03), meeting the definition of equivalence (difference within one line). The BSCVA had improved by two lines or more in 28 patch-group eyes (66.7 percent) and 31 acupuncture-group eyes (75.6 percent). Amblyopia was resolved in seven patch-group eyes (16.7 percent) and 17 acupuncture-group eyes (41.5 percent). The authors of the study conclude that further studies are warranted to investigate acupuncture’s value in the treatment of amblyopia.


Blue Light-Filtering IOLs Make For Safer Driving
Intraocular lenses incorporating blue light-filtering technology may reduce glare disability and collisions, according to researchers at Arizona State University in Mesa. The cross-sectional study included patients with a blue light-filtering AcrySof Natural SN60AT IOL (study group) and patients with an AcrySof SA60AT IOL with no blue-light filter (control group), with 17 patients in each. All had good visual acuity and a valid driver’s license and performed left-turn maneuvers in a driving simulator in front of oncoming traffic. The safety margin (time to collision minus time taken to turn at intersection with oncoming traffic) was calculated. The measurements were repeated with a glare source simulating low-angle sun conditions (daytime driving).

With glare, the safety margin was statistically significantly greater in the study group (mean 2.534 seconds ±0.488) than in the control group (mean 2.116 seconds ±0.511) (p<0.05). Comparing no-glare and glare conditions, the study group had significantly lower glare susceptibility, fewer collisions with the oncoming car and a lower impact on intersection approach speed than the control group. The real-world benefit of this technology is presumably mediated by a stronger signal to detect approaching objects (motion-in-depth) as a result of a reduction in glare disability, suggest the authors.


Intraocular Antagonism of VEGF Aids ME Patients
Injection of anti-vascular endothelial growth factor agents provides substantial long-term benefit to patients with macular edema caused by retinal vein occlusions. Frequent injections are required in some patients with branch RVO and most patients with central RVO. A prospective, randomized trial at the Johns Hopkins University School of Medicine, Baltimore, evaluated 20 patients with macular edema caused by BRVOs and 20 with CRVOs. After the month-three primary end point, patients were seen every two months and received injections of an anti-VEGF agent as needed for recurrent edema. Mean change was measured from baseline best-corrected visual acuity at month 24 with assessment of other parameters of visual function and center subfield thickness (foveal thickness).

With an average of 3.5 injections of ranibizumab in year two, mean foveal thickness at month 24 was 338 µm, compared with 278 µm at month three and 533 µm at baseline. Duration of RVO >one year at study entry and nonperfusion of perifoveal capillaries for 360 degrees were correlated with reduced visual outcomes.


Seafood Wards Off AMD
New data has surfaced demonstrating the effect both fish and shellfish have in protecting against age-related macular degeneration. Researchers at the Wilmer Eye Institute performed a cross-sectional study of dietary and ophthalmologic data from a random sample of 2,520 Salisbury, Md., residents aged 65 to 84 years. A food frequency questionnaire was used to estimate weekly fish/shellfish consumption for each participant. AMD status was determined from fundus photographs obtained at baseline and graded by two masked readers for drusen size, retinal pigment epithelium abnormalities, geographic atrophy and choroidal neovascularization. The association between weekly fish/shellfish intake and risk of AMD was investigated using logistic regression while adjusting for risk factors and correlation between eyes.

The distribution of weekly fish/shellfish consumption was not different between specific AMD categories compared with controls (p=0.6, 0.7 and 0.7 for large drusen, pigment abnormalities and advanced AMD compared with controls, respectively). Those with advanced AMD (CNV or GA) were significantly less likely to consume fish/shellfish high in omega-3 fatty acids (odds ratio 0.4; confidence interval, 0.2 to 0.8). Combined crab and oysters intake, each of which has high levels of zinc, was not related to AMD status.