Every field of medicine faces numerous challenges when dealing with unsolved disease pathologies. In ophthalmology, the most demanding areas of research involve multifactorial diseases that could lead to blindness. We struggle with age-related macular degeneration, diabetic retinopathy, glaucoma, uveitis, optic-nerve degeneration, endophthalmitis and other complex disorders. Since many ocular diseases have pathogenic mechanisms in common with diseases that affect other areas of the body, collaboration between various fields will improve our knowledge of certain disease pathologies and our ability to develop beneficial treatments. 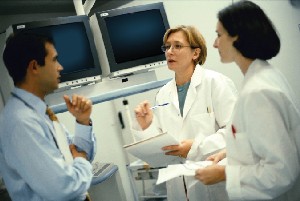 This article is the first in a two-part series on emerging interdisciplinary approaches to treating complicated ocular diseases, and how this trend will enhance our potential in the field of ophthalmology. This installment will focus primarily on retinal and optic-nerve disease, while next month's will look at interdisciplinary approaches to managing corneal pathology.

Interdisciplinary medicine is at work in several different areas of retinal disease:
• Macular degeneration. The pathogenesis of neovascular AMD is not completely understood, but the process is characterized by excessive angiogenesis, the abnormal proliferation of blood vessels within the macula that can leak blood and/or fluid within the subretinal space. This results in the formation of choroidal neovascularization lesions that distort or destroy vision.

The most recent developments in CNV therapy are anti-angiogenesis drugs. Each drug, based on its particular mechanism of action, targets a specific step in the angiogenesis pathway. For example, the recently approved pegaptanib sodium (Macugen, Eyetech/Pfizer) blocks vascular endothelial growth factor (VEGF), the most common angiogenic signal. Anecortave acetate (Retaane, Alcon), which may be approved this year, works to block growth factors, inhibit endothelial cell division and migration, and retard tissue changes.

A striking comparison can be made between AMD and oncology. Many of the angiogenesis inhibitors that are now being investigated in clinical trials to inhibit CNV associated with AMD are also being investigated for their ability to inhibit cancerous tumor growth. Some examples include thalidomide, combrestatin A4 phosphate, protein kinase inhibitors, anti-VEGF antibodies and interferons. Many of these were first implicated for treating cancer and later used in CNV trials. In addition, the VEGF-Trap (Regeneron), first developed for treating CNV (now in Phase-III trials), is presently being studied in Phase I cancer trials. This promising interdisciplinary approach will hugely benefit both fields and also allow for the development of drugs to treat each disease in parallel. Similar to how oncologists choose from a variety of medications and treatment combinations geared toward specific cancer types, as more drugs are made available to us, retinal specialists may eventually be able to do the same, depending on the type of CNV lesion.

Before CNV develops, the pathogenesis of AMD begins with the formation of drusen, deposits located beneath the retinal pigment epithelium. Recent studies have shown that drusen associated with AMD contain proteins common to the plaques and deposits found in other age-related diseases, including atherosclerosis and Alzheimer's.1,2 The localized inflammatory response elicited by the presence of these plaques and deposits is believed to be analogous to the inflammation associated with drusen biogenesis, which subsequently triggers an increase in choroidal vascular resistance.3 Examining the associations between AMD, atherosclerosis and Alzheimer's will help us understand the complexities of these similar disease pathways.

The emerging connections between age-related diseases are especially significant in our aging population. Other examples of similar disease associations include inflammatory disorders such as uveitis and arthritis, and diseases of bacterial origin such as endophthalmitis and meningitis.

New research involving injections of stromal cell-derived factor (SDF)-1 antibodies into the eyes of mice with experimentally induced proliferative retinopathy has resulted in inhibition of abnormal blood vessel growth. The SDF-1 protein is one of the main directors for shuttling blood stem cells all over the body. Researchers believe that SDF-1 does not break down within the eyes of patients with diabetic retinopathy, but instead continues to direct blood-vessel growth.4  Collaborating with stem-cell researchers in this area will lead to advances in both ophthalmology and stem-cell research, as each can benefit from the other.

Physicians and researchers from different fields are making strides in the following areas, as well:
• The optic nerve. The optic nerve is unique in its relative isolation from other nerves, and its well-ordered axonal system that has each nerve originating from the same source. This has made it a frequently studied system as a model of central nervous system structures, and more is known about the optic nerve than most others. However the applicability of optic-nerve research may extend to CNS or spinal-cord injury as well.5

During fetal development there is a veritable explosion of nerve production (ganglion cell axons) and a subsequent fall out of almost two-thirds of them. Researchers believe that the initial overzealous growth of these nerves does in fact result in an overpopulation, and the "pruning" that follows is a necessary step to refine the neural pathways. Such programmed cell death is typically due to apoptosis.

An extremely complex system of many mediators and cell signals determines which cells will persist and which will degenerate. This system is not yet fully understood.5 At a point early in development, our nerves transition from being able to regenerate and grow to a state in which they are no longer capable of regenerating.

Researchers use an optic-nerve model to study this brief window of time in order to analyze what changes cause the loss of regenerative ability. The model's results are assumed to also be relevant for the CNS. One finding in this model was that the gene Bcl-2 was strongly expressed by neurons, resulting in the strong promotion of optic-nerve regeneration; however, as the mice aged past the window of time when nerve regeneration was possible, Bcl-2 expression was decreased.6

Another study examining this window investigated the neonatal opossum, in which spinal-cord and optic-nerve cells can regenerate nine days after birth but can't past day 12. These researchers sought to determine which genes are turned on and off during this crucial transition period.7

These studies are just two examples of the multitude of research being conducted to help give us a glimpse into the highly complex system of nerve growth, and the differences in cellular environment or conditions needed to stimulate or inhibit that growth. Each small piece of the puzzle will bring researchers closer to the overall picture of what it will take to artificially induce controlled nerve regeneration. The collaboration of ophthalmology and neurology can continue to expand by conducting research pertinent to optic nerve, CNS and spinal-cord injury scenarios.

• Glaucoma. This is another blinding disease, characterized by damage to the optic-nerve head and irreversible loss of retinal ganglion cells. While elevated intraocular pressure due to improper aqueous-humor drainage (or increased production) is a well-known risk factor, we are anxious to see how neuroprotective agents fit into the treatment strategy.

It's interesting to note how we are again led to Alzheimer's disease: A neuroprotective agent, memantine, originally used in dementia patients and now approved for Alzheimer's, is also being studied for glaucoma by Allergan. Nitric oxide is another example. As both preclinical and clinical methods of studying optic-nerve degeneration improve, and we relate new methods for assessing neuroactivity to ophthalmic research, our ability to screen compounds for age-related degenerative diseases such as glaucoma may become more efficient.

Investigating structural and functional similarities between such tissues as the choroidal plexus, the source of cerebrospinal fluid, and the ciliary body, the source of aqueous humor, will help us identify similar mechanistic components involved in neurodegenerative diseases and glaucoma. Looking at the structure of the trabecular meshwork and ciliary muscle as tissues that impact drainage of aqueous from the eye, we can also look to agents in other medical areas that may affect targets such as actin/myosin and calcium transients as potential agents for glaucoma. In fact, we see this happening with drugs like matrix metalloproteinases and cytoskeletal agents, both of which have pharmacological activity originally used in non-ophthalmic areas that are now being applied to glaucoma.8,9 Mutual efforts among ophthalmologists, biologists, biochemists and biomedical engineers to examine the pathogenic mechanisms of glaucoma through interdisciplinary approaches will be necessary for investigations leading to major advances in the field.

Medical disciplines can work with bioengineers and physicists to develop novel devices for treating disease.

For example, Othera Pharmaceuticals (Exton, Pa.) has recently begun researching a method for detecting early-stage cataracts and treating them non-invasively. The research is focused on the assembly of various polymers via specific, ligand-receptor interactions.

Another example is the first, recently approved drug-eluting stent, the Cypher stent (Cordis Corp., Miami Lakes, Fla.) for angioplasty procedures to open narrowed or blocked blood vessels in coronary artery disease. The stent keeps the vessel open while slow release of the drug prevents buildup of tissue that could re-clog the artery.

As we try to apply this technology to ophthalmology, it's important to bring together experts in the fields of pharmacokinetics, material- and polymer-chemistry with experts in ophthalmology and ophthalmic pharmacology. Together, this group can solve such issues as which drug to select, the specific design of such a device, where to place it, how to insert it, the appropriate release kinetics, and toxicological considerations.

Similar drug delivery systems are in the beginning stages of development for treating glaucoma, AMD and other systemic vascular diseases.

Ophthalmology can certainly benefit through partnership with other disciplines. To this end, Darlene Dartt, PhD, of the Schepens Eye Research Institute in Boston, was awarded a $2.2-million grant from the National Institutes of Health to form teams of basic and clinical researchers from many disciplines to find cures for blinding eye diseases such as macular degeneration, diabetic retinopathy and glaucoma. We hope this opportunity opens the door for advances in interdisciplinary approaches to treating ophthalmic disease.

As the work being done in areas such as retinal disease and glaucoma demonstrates, collaboration among experts in the field of ophthalmology, other specialties, biology, chemistry,  and engineering improves our knowledge of complicated disease pathologies and allows us to make use of the latest technologies for developing the most-effective treatments.

Evaluating Epiphora: Nothing to Cry About

ARVO Goes to the Emerald City