I’ve been involved with two teams investigating the femtosecond laser in keratoplasty: presently at the Casey Eye Institute of the Oregon Health & Science University in Portland, and previously at the Gavin Herbert Eye Institute at the University of California, Irvine. In this article I’ll review how FLAK compares to conventional PKP and report on some novel applications of the femtosecond technology, such as repairing a cornea that previously had radial keratotomy. Then I’ll discuss some of the challenges of bringing this technology to more widespread use in corneal transplantation.

Real and Theoretical Concerns
As with any emerging medical technology, some clinicians met the use of the femtosecond laser in corneal transplantation with trepidation. Many corneal surgeons were concerned about the elevated intraocular pressure the device applies to the eye during trephination. Animal studies have shown IOPs rose to 120 mmHg during applanation of the laser.

Corneal scars lack the tensile strength of native tissue and tend to heal more slowly with age. This naturally raises a concern about wound dehiscence when the cornea is subjected to highly elevated IOP. However, we’ve found that previous corneal lacerations, penetrating injuries or paracentral trephination scars do not seem to impair laser trephination and are sturdy enough to withstand significant transient applanation forces during laser trephination.

A study we published in March this year compared 50 consecutive cases that underwent FLAK with a zigzag incision with 50 subjects that had conventional blade trephine incision PK.1 The average age for the FLAK group was 46.26 (range 41.9 to 50.62) whereas the average age for the PK group was 51.88 (r: 47.52 to 56.24). All other factors, such as type of disease and history, were similar across the board. There were no complications related to the laser trephination.

Indications, Contraindications
Previously injured or operated eyes that have demonstrated a certain level of healing are good candidates for FLAK. One of our studies involved procedures on some eyes at about five months after the injury.4 We’ve repeated the procedure many times since the study was published and we have yet to see dehiscence. As the femtosecond technology continues to advance, applanation/interface times will become shorter and pressures will become lower. Eventually we could even see a no-touch femtosecond laser. That would be advantageous in treating acutely injured eyes.

FLAK is not recommended on a non-healed scar or recent incision. Exclusion criteria also include significantly opacified peripheral corneas or filtering blebs and occasionally other filtering devices that may interfere with applanation. Some pediatric patients or patients with developmental disabilities may not tolerate the laser applanation process even with topical anesthetic. Theoretically the procedure could be done under general anesthesia, but having an anesthesiologist and relevant monitoring equipment in an ocular laser suite where the femtosecond laser is commonly housed is not always practical.

Comparative Studies
The seminal study of FLAK came out of the University of California, Irvine, in 2009.2 It compared 49 eyes of 43 patients that underwent femtosecond laser zigzag incision pattern PK with 17 eyes of 14 patients that had the conventional Barron suction trephination PKP performed contemporaneously. All PKPs were closed with an identical, 24-bite running nylon suture technique. In this study we found that the femtosecond laser-generated zigzag incision resulted in less astigmatism and faster recovery of vision than conventional PKP.

Two years later, our group’s comparison study out of Oregon showed similar results.1 Our study compared 50 consecutive cases that underwent zigzag incision FLAK and 50 subjects that had conventional blade trephine incision PK over two years. Age, diagnosis and level of concurrent ocular morbidities were similar in both groups. Our study differed from the earlier study in that these groups were better controlled and our group used three different suturing techniques, either a 16-interrupted, 24-interrupted or 24-bite, running technique depending on the surgeon’s preference.

We documented significantly lower topographic astigmatism in the FLAK group over the PK group at four to six months of follow-up, an average of 5.79 D (n=30) vs. 8.42 D (n=22). This correlated with significant earlier selective suture removal in the FLAK group over both the two to three month and four to six month follow-up periods. However, we found the deviation in visual acuity between the FLAK and conventional PKP dissipated at nine out to 24 months. When we took a closer look at subsets of patients with keratoconus or post-LASIK ectasia we found no difference in either astigmatism or visual acuity at any time.

Like the 2009 UC Irvine study, we encountered no complications or difficulties with trephination in the FLAK procedure across a wide range of corneal pathologies. We feel that this supports the idea that the femtosecond laser cut creates a stronger graft-host interface less inclined to slippage than conventional trephination PKP.

Higher-order Aberrations
We also reported a study that retrospectively compared higher-order aberrations after FLAK and after DSAEK and conventional PKP.3 In this study of 67 eyes of 59 patients, DSAEK, not surprisingly, induced fewer anterior surface HOAs. Remarkably, even though all three forms of keratoplasty alter the posterior corneal surface, DSAEK had greater posterior surface HOAs than FLAK or PKP. Results of FLAK and PKP were similar, although FLAK demonstrated a trend toward fewer HOAs than PKP.

This is significant because anterior and posterior HOAs correlate with poorer visual outcome and probably contribute to decreased best spectacle-corrected visual acuity after keratoplasty. In this study, the 22 eyes treated with DSAEK had an average BSCVA of 20/51 vs. 20/35 for the 34 eyes treated with FLAK and 20/38 for the 11 eyes treated with conventional PKP. Interestingly, even DSAEK eyes had more anterior corneal surface aberrations than normal eyes, which suggests that we still have a way to go in improving the optics of the human eye, even after DSAEK.

Confocal microscopy studies have suggested that the laser incisions induce more rapid keratocyte activation than the conventional technique, but further study will demonstrate if this correlates with stronger corneal wound healing. We feel a significant advantage of FLAK is the wound strength that keratocyte activation creates, greater surface area in the graft-host interface and interlocking edges. Historically the corneal surgeon’s nemesis in PKP has been the long-term weakness in this interface that can lead to graft dehiscence even after minor traumas years after surgery. Preliminary evidence has suggested that the femtosecond laser incisions could improve the stability of corneal transplants.

Novel Applications
Besides the usual indications for PKP and FLAK, we’ve used the zigzag incision femtosecond laser approach in failed PKP and open- globe trauma with corneal laceration,4 and we even reported on one case involving a cornea with 16 radial keratotomy incisions.5

In 12 eyes with failed PKP or corneal trauma treated with FLAK, we did not experience any complications or adverse events.4 In addition, all trephinations were adequate and complete even in the setting of corneal scarring. Eight open-globe trauma patients in this group had multiple procedures. Postoperative IOP became an issue for four patients: We placed an Ahmed valve in one patient with a previously ruptured globe and put three others (two with a previously ruptured globe and one with a previously failed graft) on IOP-lowering drops. We did not believe these pressure rises resulted from using the femtosecond laser.

Corneas that previously had radial keratotomy are challenging for keratoplasty because the RK incisions can be almost at the depth of the endothelium. These patients can be subjected to high or fluctuating astigmatism, or both. In these eyes, DALK is appealing because only replacing the diseased or damaged corneal layers theoretically reduces the risk of rejection. Our goal in this group would be to remove the damaged anterior portion of the cornea but retain the healthy endothelium.

Success of a “big-bubble” DALK technique in an eye with multiple RK incisions can be problematic; the incisions allow air to escape when injecting air into the cornea before Descemet’s membrane is barred. We published a case to show that the femtosecond laser gave us much more accurate placement of posterior corneal incisions than the conventional approach, and using OCT allows us to accurately measure the corneal thickness.5 We programmed a very specific endothelium depth, precisely placed the air cannula and achieved an adequate air bubble separation of Decemet’s membrane and the endothelium. We’ve done a few more of these big-bubble cases on post-RK corneas since the report with 100-percent success.

We and others have reported myriad other novel uses of femtosecond lasers in corneal surgery, including multiple incision designs, posterior lamellar keratoplasty incisions, incisions for keratoprostheses and keratolimbal allografts, corneal pockets for corneal inlays and therapeutic agents, corneal biopsies and corneal tattooing.

Challenges
The cost of FLAK is another significant issue. Even as femtosecond lasers become ever more common in refractive surgery centers, financial barriers to implementing them in keratoplasty persist. The technology is very expensive to acquire, and the costs are ongoing. Older systems require hardware and software updates for keratoplasty (the newer platforms do not). There’s also the click fee for each cut the laser makes, and in keratoplasty there are two cuts: one to obtain the donor cornea and the other to prepare the host. However, insurance does not acknowledge this added cost in the reimbursement. As part of the investigational program, our university bears the cost of every click fee for FLAK. We can partly get around the cost for the donor tissue if the eye bank cuts the donor tissue to our dimensions. The eye bank may incorporate this cost into its fee for preparing the donor tissue. Several eye banks in the United States now have femtosecond lasers and can provide pre-cut tissue.

The femtosecond laser holds great promise for improving visual acuity and graft stability for patients who receive corneal transplantation. As the technology improves it may hold the key to even better outcomes and future sutureless transplants. Perhaps in the not too distant future we’ll see a modular one-laser-does-all platform that can do refractive, cataract and keratoplasty surgery. Inevitably, we hope that competition among laser manufactures brings costs down and that procedures will become more readily reimbursable. This will make the femtosecond laser corneal surgery techniques more widely available. The early results already bode well for this “breakthrough” technology. 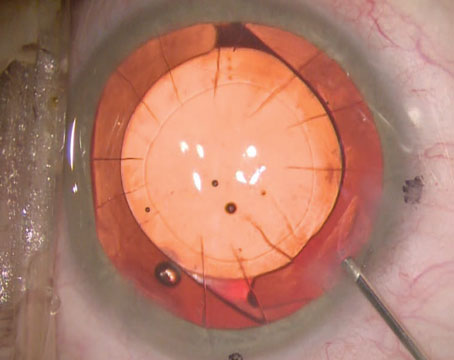