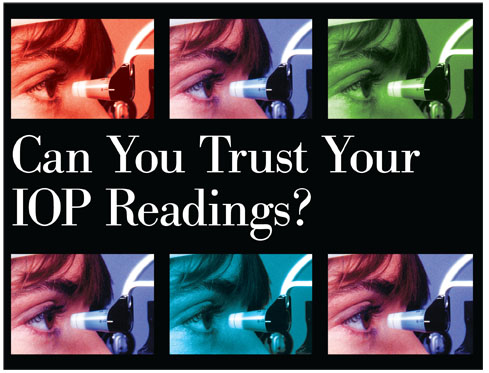 Although Goldmann applanation tonometry is still the gold standard for measuring IOP, it is not ideal. “We have known for years that Goldmann applanation tonometry is flawed because of the different corneal parameters that can affect the accuracy,” says Leon Herndon, MD, associate professor of ophthalmology in the Glaucoma Service at Duke University Eye Center. “The Ocular Hypertension Treatment Study showed the impact of corneal thickness on the true pressure, and other studies have looked at corneal biomechanics and how they might impact on glaucoma progression probability. Each cornea is very different.”

Although it is well-known that corneal thickness affects IOP measurement accuracy, there is no specific nomogram to adjust the Goldmann readings in relation to the exact corneal thickness. “We know that people with thicker corneas will get an artificially high reading and people with thinner corneas will get an artificially low reading,” says Richard Lehrer, MD, who is in private practice in Alliance, Ohio.

“There have been a lot of studies done to try to come up with some sort of a nomogram to account for corneal thickness, but those nomograms really haven’t panned out to work too well because there is more to it than corneal thickness. Corneal rigidity also plays a role in our pressure reading.”

Previous corneal surgery and high levels of astigmatism can also affect pressure readings. “It is always challenging to get an accurate IOP measurement in patients who have undergone LASIK,” says Mildred Olivier, MD, who is in private practice in Hoffman Estates, Ill. “Some have suggested trying to get the peripheral measurement. I try to get measurements prior to LASIK and then post-LASIK to see what the differences are. I like to see how much a patient’s IOP measurement has dropped just from the LASIK procedure.”

Additionally, patients’ IOP measurements fluctuate throughout the day. “For most patients, pressure is highest in the morning, but that’s not always the case,” says Michael Stiles, MD, who is in private practice in Overland Park, Kan. “There is more and more evidence that shows that there may be spikes of pressure outside of traditional office hours. If you have a patient who seems to be getting worse at seemingly normal pressure, then it’s helpful to get pressures as early and as late in the day as you can. Even then, you still have to look at the whole picture because there might be things going on outside of office hours or in between office visits that you’re not aware of.” He notes that alcohol and marijuana use and drinking a large volume of liquid can temporarily affect IOP measurements.

According to Dr. Lehrer, it can be difficult to get an accurate IOP reading on patients who squeeze their eyelids shut or who hold their breath during the measurement. “Additionally, some patients have droopy eyelids. It can be very difficult to lift up the eyelid and keep it out of the way of the tonometer tip. Sometimes, patients are very large or have to lean too far forward, and that can throw off the reading,” he explains.

Conditions such as corneal edema can artificially lower IOP measurements, and corneal scarring can cause higher IOP measurements, according to Steven Vold, MD, who is in private practice in Rogers, Ark. “Technique can also affect readings. For example, if you are accidentally pushing on the eye a little bit, that will give you a higher pressure reading as well,” he adds.

“However, most people don’t have a pneumotonometer, but they do have access to a Tono-Pen, and some ophthalmologists only have a Tono-Pen,” says Dr. Olivier. “Using a Tono-Pen for children or other patients who can’t put their chins on the slit-lamp machine can provide a range of IOPs to compare, but the Tono-Pen is not always accurate at very low or very high ranges.”

A study comparing Goldmann tonometry with the Tono-Pen XL found that the Tono-Pen should not be used as a substitute for Goldmann in the management of patients with glaucoma or ocular hypertension.3 In this study, patients’ overall mean IOP was 18.3 ±4.8 mmHg using Goldmann and 18.8 ±5.5 mmHg using the Tono-Pen. The upper and lower limits of agreement between the two methods were +10.6 mmHg and -9.6 mmHg. Significant IOP overestimates and underestimates were made in 16 percent of patients.

The Pascal Dynamic Contour Tonometer was designed to eliminate the influence of some of the corneal factors. However, Dr. Lehrer says that he has encountered problems with the consistency of the probe tips. “There tends to be some drift in the probe measurements over time, so I don’t think it’s as reliable over the long-term unless there is a way to constantly calibrate it to get good readings,” he says.
A Japanese study compared IOP measured by dynamic contour tonometry with that measured by Goldmann applanation tonometry and noncontact tonometry.4 The study also assessed the effect of central corneal thickness and corneal curvature radius on IOP measurements.
The mean IOP measured by dynamic contour tonometry was 2.8 mmHg higher than that measured by Goldmann and 3.2 mmHg higher than that measured by noncontact tonometry. There was a larger difference with thinner corneas in the lower IOP group than in the higher IOP group. Measurements with Goldmann and noncontact tonometry were significantly correlated with central corneal thickness; however, dynamic corneal tonometry IOP measurements did not correlate with central corneal thickness.

The rebound tonometer uses a probe that bounces off the cornea very imperceptibly. “It has been shown to be very effective in the pediatric population, and I’ve also used it effectively in adult patients who are bad squeezers,” says Dr. Herndon.

However, a study found that Icare rebound tonometry may be used to estimate IOP in selected children with known or suspected glaucoma whose IOP cannot otherwise be obtained.6 In this study, IOP by Icare tonometry was within 3 mmHg of Goldmann in 63 percent of eyes.


Tips for Accurate Readings
To obtain a reliable reading, technique is important. Dr. Lehrer notes that he often gets different readings than some of his technicians do.
“Some technicians are a little rougher on patients,” he says. “When you are taking someone’s pressure, it is very important not to touch his or her eye at all. If you do have to help hold the eyelid open, make sure not to put any pressure on the globe because that will obviously increase the IOP. Also, make sure the patient relaxes and breathes while you’re taking the pressure. Obviously, if the patient has a really tight collar, ask to loosen the collar. If he is leaning way forward, you really want to try to position him so that he’s not leaning so far forward. Those things can help.”

Although Goldmann applanation tonometry is not ideal, glaucoma specialists believe it will remain the gold standard for the foreseeable future. “Although the Pascal technique may be more accurate, it’s quite expensive,” Dr. Vold says. “You have to buy the machine, and the tips are disposable. Goldmann is hooked to the slit lamp. It’s convenient and cheap. With the pneumotonometer, purchasing a unit for every room is generally not feasible from a business perspective.”

Dr. Olivier agrees. “I see the Goldmann being the gold standard for the foreseeable future,” she says. “The ideal machine would take into account the corneal thickness as well as the pressure and sort of give us ‘the magical number’ that brings all of these factors together and calculates a true IOP. For now, other methods for measuring pressure have gotten a lot better so we will continue to depend on those as an alternative. In my travels to Haiti, a portable instrument that gives us a true measurement would be ideal to use in remote areas where I can’t bring a slit lamp with Goldmann applanation tonometry. Having an instrument that gives you a couple of readings very quickly would make life so much easier.”

According to Dr. Herndon, even with new technologies available, Goldmann is here to stay. “It’s not going anywhere anytime soon. It is 60-year-old technology, and it’s ingrained in what we do,” he says.