Drops continue to be the mainstay of glaucoma treatment, even though they are less than ideal. One of the main obstacles to successful glaucoma treatment is lack of patient compliance with drop regimens. Additionally, constant drop instillation takes a toll on the ocular surface. In this article, experts in sustained-release medications, which might help avoid some of drops’ problems, discuss the pros and cons of the burgeoning technology.

Several companies are exploring sustained-release delivery of drugs, though none of the devices are currently FDA-approved. “Enhancing adherence to therapy is one significant advantage of sustained-release depots,” says Malik Kahook, MD, professor and the Slater Family Chair in Ophthalmology, The University of Colorado School of Medicine in Aurora. “It’s widely known that patients fail to take many of the medications prescribed to them, and glaucoma drops are no exception. Having access to a therapy that could deliver drug over a long period of time without reliance on patient dosing would be one way to overcome this issue. Long-term depots may also lessen side effects associated with topical application of drops, which result in significant patient morbidity. Another potential benefit, which remains unproven, is the possibility of decreasing IOP fluctuations that result from pulsed dosing of drugs, via continuous delivery of drug to targeted tissues. However, it should be noted that some of our best therapeutics, such as prostaglandin analogs, may function better as a pulsed dose rather than a continuous delivery. This may be one reason the various sustained-delivery platforms studied to date have failed to achieve prostaglandin-like efficacy.”

The medication group had significantly higher OSDI scores (median: 10.24 vs. 2.5 in the control group) and corneal staining scores (≥1: 64.93 percent in the medication group vs. 32.61 percent in the control group). Noninvasive tear-film breakup time and lower tear meniscus height were similar between the groups. A higher daily preservative concentration was associated with a lower tear meniscus height.

There are five sustained-release delivery systems targeting glaucoma that are currently under investigation: bimatoprost SR and the bimatoprost ocular insert from Allergan (Dublin, Ireland); iDose from Glaukos Corporation (San Clemente, California); and the OTX-TP and -TIC implants from Ocular Therapeutix (Bedford, Massachusetts).

hrough week 16 was 7.2, 7.4, 8.1, and 9.5 mmHg with the 6 µg, 10 µg, 15 µg and 20 µg dose strengths of implant, respectively. Topical bimatoprost caused a mean IOP reduction of 8.4 mmHg. Rescue treatment/retreatment wasn’t required in 91 percent and 71 percent of study eyes up to week 16 and month 6, respectively. Adverse events in the study eyes usually occurred within two days after the injection procedure and were transient. Conjunctival hyperemia was more common with topical bimatoprost than bimatoprost SR onset later than two days after the injection procedure (17.3 percent vs. 6.7 percent of eyes).

According to E. Randy Craven, MD, FACS, an associate professor at Johns Hopkins’ Wilmer Eye Institute, patients’ mean pressure at enrollment in the study was just over 23 mmHg, and it dropped to between 16 and 17 mmHg after treatment. “It stayed that way for many months after implantation for many of the patients,” he says. “Safety-wise, patients’ main complaint was that their eye was a little irritated on the day of implantation. Despite that irritation, patients tolerated the implant better than they did drops. With bimatoprost SR, there is a lower rate of hyperemia and a lower rate of eyelash growth and irritation on the surface of the eye. So, we have seen pretty encouraging results.”

• Bimatoprost Ocular Ring Insert. This is a flexible, ring-shaped device that’s placed under the upper eyelid into the fornix and then under the lower lid. It’s left in place to release clinically effective concentrations of the agent over six months. Phase II results have shown the ring achieves clinically significant reductions in intraocular pressure over a six-month period with what the investigators deemed an acceptable level of safety and tolerability.4

Of more than 300 patients who participated in Phase I and II trials, 90 percent or more have said the ring is comfortable, while it achieves an average IOP lowering of 4 to 6 mmHg over six months. Additionally, 88.5 percent of patients retained the rings without assistance for six months, and adverse events were in line with bimatoprost or timolol exposure.

• iDose Travoprost. Glaukos’ iDose Travoprost implant is filled with a special formulation of travoprost and is designed to continuously elute therapeutic levels of the medication within the eye for extended periods of time. When depleted, the iDose Travoprost can be removed and replaced in a similar subsequent procedure.

This interim cohort includes 74 patients: 49 were implanted with one of the iDose travoprost implant models and 25 patients were in the timolol comparator group. Average IOP reductions observed in this cohort of implant patients during the first 12 months showed that iDose Travoprost achieved an approximate 30-percent reduction in mean IOP compared with baseline IOP. Additionally, the mean number of glaucoma medications ranged from 0.54 to 0.56 at 12 months in the fast and slow iDose Travoprost elution implant groups, respectively, compared to a mean of 0.72 medications in the timolol group. The most recent Phase II data also continued to confirm a favorable safety profile for iDose Travoprost, with no hyperemia reported to date in either elution group.

• OTX-TP. Ocular Therapeutix’s OTX-TP is administered as an intracanalicular depot through the punctum and is designed to deliver travoprost to the ocular surface for up to 90 days. A phase III study including 73 patients at 11 clinical sites in the United States was conducted to assess its efficacy and safety as compared to timolol.6

• OTX-TIC. Recently, Ocular Therapeutix announced the treatment of the first patient in a Phase I, open-label, proof-of-concept clinical trial being conducted in the United States for OTX-TIC, a bioresorbable travoprost implant delivered via an intracameral injection for the reduction of intraocular pressure in patients with glaucoma and ocular hypertension. According to the company, the multicenter, prospective trial will evaluate the safety, efficacy, durability and tolerability of OTX-TIC. The implant is designed to release the drug over a period of four to six months.

According to Dr. Kahook, there are several downsides to these delivery systems. “A major disadvantage to some sustained-delivery platforms is increased invasiveness compared to topical therapy,” he says. “Injectables might achieve enhanced adherence for some patients but, at the same time, they can expose them to complications such as infections that aren’t associated with topical therapeutics. The cost/benefit analysis of transitioning patients from topical therapy to more invasive drug depots also requires further contemplation and may present a significant barrier to widespread adoption by both patients and physicians.” Surgeons say this cost barrier could be more significant initially, since the implants might not be covered by insurance immediately after they’re approved.  REVIEW 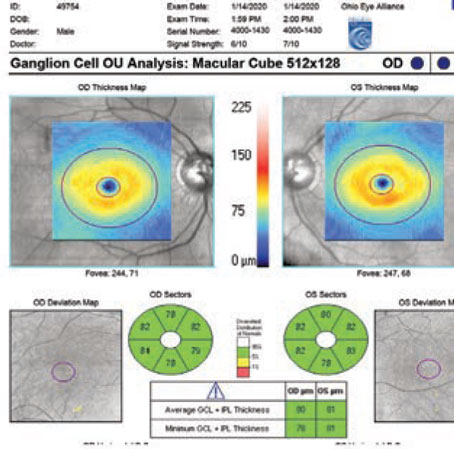