For a while, LASIK with microkeratomes ruled the roost of refractive surgery, but now times have changed. Surgeons have several options for creating a LASIK flap—or can avoid a flap altogether by performing surface ablation, a procedure that has been elbowing its way into the spotlight with LASIK in recent years. As the procedure options have multiplied, so have the studies looking into their pros and cons. To learn the latest about the procedures you already perform or are planning to perform, read on.
(Unless otherwise stated, none of the studies presented here had any commercial support.)


Corneal Inlays and Lenses
Austrian researchers have amassed two-year data on the implantation of the AcuFocus KAMRA corneal inlay for the treatment of presbyopia. Several of the researchers have either received honoraria from AcuFocus or are employees of the company. 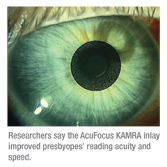 In the study, 25 hyperopic presbyopes were implanted with ReVision Optics’ 2-mm diameter hydrogel intracorneal inlay and underwent a concurrent LASIK procedure to correct hyperopia. The mean preop sphere was +1.9 D. The Optec 6500 Vision Tester was used to record visual acuities, and a questionnaire was used to gauge the patients’ ability to perform everyday tasks without additional visual aid (there were five tasks for each of three distance ranges). 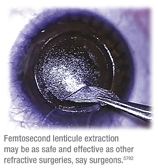 In the implanted eye, near uncorrected visual acuity improved in all of the eyes at one month, with an average improvement of seven lines. More than 80 percent of implanted eyes achieved J1 (20/25) or better uncorrected near visual acuity, though none of them could achieve that preoperatively. This level of acuity was maintained at six months (n=11) at which point all patients could read the J1 line binocularly. Intermediate UCVA improved in all of the eyes at one month, by an average of five lines, to an average acuity of 20/25. Only one patient lost distance UCVA (one line) in the implanted eye at a month postop, and the overall improvement averaged two lines. Binocular UCVA was 20/20 or better for all of the patients at both one month and six months postop, improving from an average of 20/40 preop. At one month, 13 of the 15 visual tasks could be performed by all patients with one patient not being able to read distant street signs and two not being able to read medicine labels. By six months, only one patient reported inability to perform one task throughout all distance ranges.5765

A research team from Paris says the Artisan phakic IOL is effective, but that Artisan patients should be watched closely for complications.
Their study was a retrospective look at patients who underwent Artisan implantation between 2000 and 2009, and consisted of 60 eyes of 34 patients, including 52 myopic eyes and eight hyperopes. Fifty-five Verisyse/Artisan and five foldable Artiflex lenses were implanted. Five eyes underwent further keratorefractive surgery (a bioptics procedure) and the mean follow-up was 68 months. 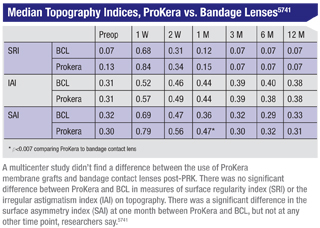 The mean preoperative endothelial cell density was 2,818 cells/mm². At one year postoperatively, the mean endothelial cell density was 2,455 cells/mm² (n=40). The mean change in endothelial cell count from baseline to 68 months was -24 percent. There were no cases of endophthalmitis or glaucoma. Five eyes of three patients underwent explantation of the phakic lens combined with lensectomy. Two eyes presented with a post-op IOL dislocation leading to IOL repositioning and one eye presented with corneal decompensation leading to a corneal graft.5778


Femtosecond Findings
Researchers from Mexico say that the new procedure known as refractive lenticule extraction may be as safe and effective as LASIK in myopia and myopic astigmatism. The ReLEx procedure uses the Visumax femtosecond laser (Carl Zeiss Meditec) to create a corneal lenticule that the surgeon then removes through a small incision, also created by the laser.

In the prospective study, researchers treated 10 consecutive patients (20 eyes) who had myopia and myopic astigmatism in which the spherical equivalent between each patient’s eyes was less than 1 D. The right eye of each patient was assigned to ReLEx and the left to conventional LASIK using the CZM Mel 80 excimer laser. Follow-up was done at day one, one week, one month and three months. At the one-month interval an independent blind questionnaire was applied over the telephone to assess patient preference. Statistical analysis was done using the software Statistical Package for the Social Sciences v.13.

The mean preop spherical equivalent in the ReLEx eyes was -3.68 ±1.40 D, and it was -3.61 ±1.58 D in the LASIK group. The difference in postop uncorrected visual acuity at one month wasn’t statistically significant (p=0.54) with half of the eyes achieving 20/20 or better and 90 percent (18 eyes) achieving 20/40 or better in both groups. Fourteen eyes (70 percent) were within 1 D of emmetropia. No eyes lost more than two lines of best-corrected acuity. On the questionnaire, half of the patients (five people) stated they see better with ReLEx and seven patients said they were more comfortable during the surgery and would recommend having ReLEx over conventional LASIK for the correction of myopia and myopic astigmatism.2845

Another group of Mexican researchers looked into the FLEx procedure, or femtosecond lenticule extraction, and say that, though the results are safe and effective, improvements need to be made for the treatment of high astigmatism.

Surgeons from the Private Medical University of Salzburg, Austria, and the University of California in Irvine have amassed preliminary results using the IntraLase iFS femtosecond laser to perform intrastromal arcuate keratotomy.

In this prospective, single-center study, two groups of patients with astigmatism (either naturally occurring or post-cataract surgery) were treated with iFS laser arcuate cuts that were made completely intrastromally on the steep axis. Depending on the amount of astigmatism (treatment goal: 0.75 to 3 D) four different treatment patterns were used, and varied based on the diameter of the zone, the side cut angle and the width of the incision according to the pachymetry values. They followed the patients for a minimum of three months after surgery.

To date, 15 eyes were treated with this method, 13 patients starting with naturally occurring astigmatism and two additional patients with astigmatism following cataract surgery. The surgeons say that the laser system predictably delivered the preselected cut patterns. No perforations occurred and all incisions were placed at the planned locations. The investigators report that the incisions were barely visible by slit-lamp examination at the first postoperative day, but could be detected with optical coherence tomography (Visante, Carl Zeiss Meditec). The reduction of astigmatism was found to be between 0.25 and  2.5 D, and the surgeons say the refractive error and corneal topography were highly stable over time, and that the amount of induced change depended a great deal on the cut angle (between 30 and 150 degrees). Endothelial cell count was found to be unchanged as compared with preoperative values. The surgeons say that their preliminary results show that the procedure has a good safety profile and has the potential for highly precise incision creation and placement.5747

A group of researchers from the Capital University of Medical Science in Beijing found that flaps produced by the IntraLase laser and the Moria One-use Plus SBK microkeratome are very uniform, regular, accurate and reproducible when compared to the Moria M2 Single-use 90-µm head.

The researchers say that the IntraLase flap and Moria One-use Plus SBK flap thicknesses were statistically significantly more accurate than the Moria M2 Single-Use 90-um head flap thicknesses in the peripheral zone (p<0.05).5787

The study was composed of 40 patients undergoing PRK at the Walter Reed Center for Refractive Surgery in Washington, D.C. Surgeons created standard 9-mm epithelial defects using a 20%-ethanol solution followed by photoablation using the Alcon/WaveLight Allegretto Wave Eye-Q 400-MHz laser. ProKera was applied on the non-dominant eye after surgery and a high-oxygen transmissible BCL was placed on the dominant eye. The researchers used the following Tomey TMS-4 corneal topography indices to assess optical quality: surface asymmetry index (SAI); surface regularity index (SRI) and irregular astigmatism index (IAI). Corneal haze was also assessed at a week and two weeks and then at one, three, six and 12 months postoperatively. A Wilcoxon signed ranks test was used to compare ProKera to BCL and p<0.007 was considered significant, adjusting for multiple comparisons across seven time points.

Surgeons affiliated with a large corporate laser center, Optical Express, say that a patient’s past refractive change doesn’t appear to predict his future changes in refraction. They surmised this from an analysis of 252,899 patients (489,982 eyes) whose follow-up visits spanned 6.5 years.

To be included in the study, the patients’ manifest sphere and/or cylinder must have been captured for inclusion, with the initial and most recent visits separated by at least three years. The researchers also analyzed a subset of 15,864 patients (29,213 eyes) with four consecutive exams separated by 12 months (±one month). Using a predictive model, the investigators analyzed the value of past refractive stability in predicting future stability, using the standard of an annual change of no more than  0.5 D in either sphere or cylinder.

An age-related myopic shift was seen through patients’ late teens, with a smaller percentage shift as patients progressed through age 30.
There was a hyperopic shift in adulthood to age 65, then a myopic shift for those over 65. Most (94 percent) of the patients deemed unstable at a baseline exam subsequently would have been deemed stable at later exam points, while 10 percent of patients deemed stable would subsequently become unstable.

A look at the latest research on screening refractive surgery patients and getting the best outcomes with their surgeries. Read More
Research

Eyelid Laxity and Obesity in Keratoconus