A randomized clinical trial, which took place at the Lions Eye Institute in Perth, Western Australia, was conducted to compare the efficacy of treating central retinal vein occlusion using only intravitreal ranibizumab, versus combining the anti-VEGF treatment with a laser-induced chorioretinal anastomosis (L-CRA).

Researchers note that ranibizumab, which is the current treatment for CRVO, aims to treat either macular edema or anterior segment neovascularization and doesn’t address causal pathology. Since using a laser to effectively bypass the obstructed venous outflow that exists in CRVO has already been studied, the research was designed to discover whether adding the use of L-CRA to the current anti-VEGF treatment technique would improve outcomes and therefore lessen the therapy burden on both patients and physicians.

Over the course of the two-year study, 58 patients with macular edema caused by CRVO participated. Twenty-nine of them received both intravitreal ranibizumab and L-CRA treatment, while another 29 patients received intravitreal ranibizumab plus a sham L-CRA treatment. The primary criterion for interpreting efficacy was the number of injections that took place during the follow-up period of months seven to 24. They also analyzed changes in BCVA and central subfield thickness.

The study found that the addition of L-CRA laser treatment to intravitreal ranibizumab significantly reduced the number of injections that were required during the follow-up period. As a result, researchers say that this approach has the potential to decrease the therapy burden on both patients and physicians. For patients, since the study findings suggest fewer ranibizumab injections are needed with the addition of L-CRA treatment, this approach has the potential to reduce the financial burden associated with recurrent injections. Similarly, physicians can have a reduced therapy burden due to a decreased number of patient follow-up visits.

Participants included treatment-naïve subjects with choroidal neovascularization secondary to AMD. Subjects with nAMD were randomized 1:1 to receive intravitreal ranibizumab at a dose of 0.5 mg in a T&E or monthly dosing regimen.

The non-inferiority of T&E compared with the monthly dosing regimen was shown using a margin of five letters in best-corrected visual acuity improvement.

The main outcome measure was mean change in BCVA Early Treatment Diabetic Retinopathy Study  letters from baseline to month 12. Baseline and 12-month visual acuity data were available for 526 individuals (T&E: n=268; monthly: n=258). Below are some of the results:

• At baseline, mean age was 78.8 ±7.8 years: 60.3 percent were females and 94.3 percent were Caucasian. No significant between-group baseline differences were observed.

• Per protocol, a secondary analysis was performed to test for superiority of number of injections received up to month 12. This analysis demonstrated significantly fewer injections with T&E (9.4) vs. monthly (11.8) dosing, with a mean difference of -2.46 (CI, -2.68 to -2.23).

Researchers determined that 12-month results of the two-year study revealed that, with regard to visual outcomes, the T&E regimen was noninferior to a monthly dosing regimen. They added that visual outcomes similar to those of the monthly dosing group were achieved in the T&E group with significantly fewer injections.


Nerve Fiber Layer Thinning with PDR Treatment
In a recent randomized, prospective study conducted by the Diabetic Retinopathy Clinical Research Network, clinicians documented the nerve fiber layer thinning associated with intravenous ranibizumab or panretinal photocoagulation treatments for proliferative diabetic retinopathy. The researchers note that while anti-VEGF treatment and PRP have been shown through various studies to decrease RNFL thickness, they sought to understand the thinning mechanism in both treatment groups. Also, since RNFL thickness measurements can be used to monitor glaucoma progression, they also sought to determine whether changes in RNFL thickness through intravitreous ranibizumab or PRP interventions might affect their ability to monitor glaucoma in these eyes.

Out of 120 patients and 146 eyes being treated, 74 were assigned to be treated with intravitreous ranibizumab, while 66 were treated using PRP. Various tests were performed and compared, including baseline and annual follow-up spectral domain optical coherence tomography RNFL imaging, OCT macular imaging and automated static perimetry.

These results indicate that patients being treated with intravitreous ranibizumab had greater thinning of the RNFL after two years. A strong correlation between decreased RNFL thickness and central OCT subfield in eyes treated with ranibizumab was evident. This in conjunction with no visual-acuity or visual-field loss showed that decreased edema of the inner retina was the mechanism lowering RNFL thickness in ranibizumab users. Due to fluid changes in the inner retina that may cause RNFL thinning, it was suggested to not use OCT-derived thickness measurements as a method of glaucoma diagnosis or monitoring in PDR patients being treated with ranibizumab.


FLACS vs. Phaco Study
Researchers from the United Kingdom recently performed a randomized, controlled trial comparing femtosecond laser-assisted cataract surgery with conventional phaco surgery (CPS), and it ended in nearly a dead heat. The study was supported by a grant from Alcon Labs, but the researchers say the company had no role in the design or the conduct of the research.

Here are the main results:

There was a statistically significant reduction in posterior capsule rupture with FLACS (no ruptures vs. 3 percent having ruptures following CPS, p=0.03). The surgeons say that even though one more rupture in the femto group, or one fewer in the phaco group, would have rendered this non-statistically significant, it’s an important finding due to the associated risks of further complications during the postop phase. Interestingly, the amount of phacoemulsification energy wasn’t statistically significantly different between the groups. The researchers theorize this may be due to their preference for segmentation of the cataract rather than fragmentation into cubes.

Study Sheds Light on the Effect of Postop Astigmatism

The Keys to Multifocal IOL Centration 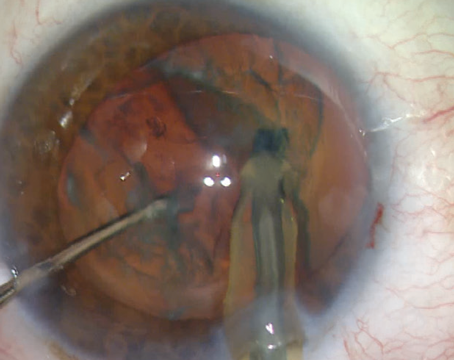