THIS YEAR"S ANNUAL ARVO CONFERENCE AGAIN LIVED up to its reputation, presenting its record-breaking number of attendees with vast quantities of high-quality research. In this month's column, we'll summarize some of the newest research presented in the areas of allergy, dry eye, and anti-infectives.

Allergy
Researchers covered the following areas of ocular allergy:
• Seasonal allergic conjunctivitis: This year at ARVO, several clinical studies examined the existing therapies for treatment of allergic conjunctivitis. One study supported by Bausch & Lomb, Muro Pharmaceuticals and the MedPointe company evaluated patient perception of azelastine HCl (Optivar, Bausch & Lomb) in subjects with a history of allergic conjunctivitis, some of whom had reported using topical ophthalmic antihistamines in the past. Following a five-day regimen of azelastine, these subjects rated their perception of its efficacy, and compared it to the efficacy of topical ocular medications used at any time in the past. The study included a subgroup of patients who had reported past use of olopatadine (Patanol, Alcon). While the results in this subgroup supported azelastine over olopatadine, one would hope this study could be repeated with proper attention to issues of patient recall, as well as the  need for medication masking and crossover design, which would provide clinicians further clinically applicable information on this comparison (Oliva A, ARVO Abstract #937, 2005).

One study evaluating anti-allergy therapies was a prospective, randomized, double-masked, contralaterally controlled Conjunctival Allergen Challenge (CAC) study comparing olopatadine to epinastine (Elestat, Allergan) and placebo in the prevention of ocular itching as the severity of the allergic reaction worsened. This study demonstrated lower mean ocular itching scores in olopatadine-treated eyes, and revealed that as the severity of allergy worsened, olopatadine maintained its efficacy, while in the epinastine group, itching scores continued to worsen as the allergic reaction became more severe (D'Arienzo P, ARVO Abstract #2677, 2005).

Another study of topical allergy therapy compared Visine A (pheniramine/naphazoline, Pfizer) to olopatadine in a placebo controlled, challenge model study. It found that Visine A was more effective than olopatadine immediately after dosing in relieving the itching (via antihistaminic action of pheniramine) and redness (due to the vasoconstrictor component, naphazoline) as well as being preferred by patients (Frisch S, ARVO Abstract #944, 2005).

Additional clinical research studied the degree to which quality of life could be improved for rhinitis patients when a topical ophthalmic medication was added to systemic and/or nasal medication regimens.

Patients with a history of rhinitis who were on a stable dose of rhinitis treatment and had never used prescription ophthalmic medication administered ocular therapy for a period of two weeks. In this crossover design study, researchers used the Rhinoconjunctivitis Quality of Life Questionnaire (RQLQ) and the Allergic Conjunctivitis Quality of Life Questionnaire (ACQLQ) scores pre- and post-ocular treatment to evaluate subjects' changes in quality of life.
Results demonstrated that, in patients with rhinitis, the addition of an eyedrop as allergy therapy can have significant impact on improving quality of life, both as measured by the ACQLQ and RQLQ (MacDonald N, ARVO Abstract #940, 2005).

Another study examined the efficacy and anti-inflammatory effects of the therapeutic agent FK506 in subjects with atopic keratoconjunctivitis   and vernal keratoconjunctivitis, as determined by clinical corneal scores and tear sample analysis of eosinophil cationic protein (ECP), a protein released from activated eosinophils. In this placebo-controlled study, FK506-treated eyes showed an improvement in corneal findings (clinical score range: 0-4) and a decrease in tear ECP levels. The test agent was determined to be safe and effective in management of severe ocular-allergy complications (Tanaka M, ARVO Abstract #938, 2005).

• Mechanisms. Beyond clinical study, some researchers delved further into understanding the mechanisms by which the allergic reaction occurs.
One study examined tissue remodeling associated with the allergic response. Using immunohistochemistry, researchers analyzed conjunctival, bronchial and nasal mucosa biopsies as well as nasal polyps from healthy, allergic or asthmatic donors.

Results showed a differential expression of MMPs among these categories of donors, which may help explain the varying structural changes in severe forms of ocular allergy such as VKC, as well as in nasal polyps and asthma. Matrix metalloproteinases in the extracellular matrix are needed to break down healthy tissue and may be good targets for therapies aimed at preventing structural changes in tissues of allergic or asthmatic patients (Leonardi A, ARVO Abstract #936, 2005).

A Special Interest Group presentation on the topic of allergy also focused on topics regarding ocular surface remodeling in allergy.

This session, moderated by Drs. Abelson and Neal P. Barney, MD, from the University of Wisconsin, included presentations on fibrosis and allergic inflammation by Dr. Abraham Solomon of Israel's Hadassah Medical Center, tissue remodeling and wound healing by Ellen Cook, PhD, of the University of Wisconsin; the roles of growth factors and corneal cells in VKC, and mast cell activation in allergic conjunctivitis by Harvard's Santa Ono, PhD.

Though many of the mediators and mechanisms involved in allergy are known, relatively little is known in the area of tissue remodeling, what reactions cause this remodeling, and what therapeutic options may be appropriate. The presentations of this SIG session focused on some of the cutting-edge research being conducted to gain a better understanding of these tissue remodeling processes.
Dry Eye
Investigators analyzed the following facets of dry-eye disease:
• Models/tools. Many instruments of measurement, from questionnaires to clinical tests, continue to be evaluated for their usefulness in the study of dry eye.

Results indicated that subjects' responses to categorical-based questionnaires correlated with answers to visual analogue scales. However, if using a visual analogue scale with markers, the researchers actually noted clustering of responses at the markers, something for future researchers to be aware of, as these data from the marked analog scales did not then coincide with the data from the corresponding subjects' categorical-based questionnaires (Pearce E, ARVO Abstract #4452, 2005).

The DEQ showed that dry-eye symptoms become worse throughout the day, which can be explained by FS–TBUT and T-TBUT supported data. The tasks model and the forced staring model both indicated that dry-eye sufferers have poor wetting of the cornea due to tear-film instability, which can cause symptoms. The exposed corneal surface caused acute, temporary burning, and this frequent stress could worsen both inflammation and symptoms continually during the day (Begley C, ARVO Abstract #4471, 2005).

Beyond questionnaires and clinical assessments, one recent study in search of an additional criterion with which to diagnose dry-eye focused on the ocular mucin genes MUC1, MUC2, MUC4, MUC5AC and MUC7.

Some think that one cause of dry-eye syndrome may be a paucity of ocular mucin secretion, so mRNA levels of the five aforementioned mucin genes were assessed using impression cytology to obtain RNA from the conjunctiva. It was found that RNA transcription levels were significantly lower in dry-eye patients compared to healthy patients for all MUC genes except MUC7.

These results indicate that dry-eye syndrome diagnosis criteria could be expanded to include MUC1, MUC2, MUC4, and MUC5AC mRNA levels, with MUC1 being the most specific and sensitive of the four (Calogne M, ARVO Abstract #4465, 2005).

Investigators at ARVO presented basic research on the lacrimal gland, providing useful insights into its normal function, which can then help us comprehend what dysfunctions are occurring in disease states like dry eye.

One study evaluated function of lacrimal duct epithelium, particularly with regard to the secretion and transport of K+, by examining expression of genes related to potassium secretion. Researchers tested gene expression using laser capture to extract RNA from microdissection of rat lacrimal glands, then were able to analyze the level of gene expression by using microarrays. They found that the lacrimal duct cells expressed approximately 150 genes to a greater degree than did acini, confirming that secretion of K+ from the duct cells is the primary source of the high K+ levels found in tears (Ubels J, ARVO Abstract #4424, 2005).

Restasis was also the agent under evaluation in a 10-patient study evaluating subjective quality-of-life parameters. Following 30 days of Restasis, patients reported improvement. However, since it was a small population and a study of symptoms only, further study will be necessary (Herrygers L, ARVO Abstract #2026, 2005).

One study performed by the inventor of Soothe and sponsored by Alimera Sciences found that the company's Soothe drops increased lipid layer thickness after the instillation of a single drop, and the magnitude of this increase was significantly greater than that which could be induced by the weakest measurable blink response (Korb D, ARVO Abstract #2036, 2005).

• Treatments in development. Three concentrations of the novel secretagogue pimecrolimus were tested in the Controlled Adverse Environment model in a randomized, double-masked clinical study of 105 patients. This model provides a regulated environment so that all subjects experience a standardized level of humidity, temperature, airflow and visual tasking. All concentrations (1%, 0.3%, and 0.1%) were well tolerated. Corneal staining data suggested a treatment effect with the 1% concentration (Ousler G, ARVO Abstract #2031, 2005).

Another study evaluated rebamipide ophthalmic suspension at three concentrations: 0.5%, 1%, and 2%. This potential treatment was studied in a multicenter, randomized, double masked, environmental model study. Results showed that, with use of the 2% suspension, fluorescein corneal staining, as well as subjective parameters such as gritty/sandy sensation and burning/pain, were decreased from baseline (Donshik P, ARVO Abstract #2037, 2005). Both of these agents may be future dry-eye therapies.

Another novel dry-eye agent in development that stood out at the meeting was an oral supplement being tested in the CAE model. This unique vitamin supplement is a patent-pending anti-inflammatory mixture of vitamins, minerals, antioxidants, phytonutrients and omega-3 fatty acids. This agent, specifically formulated as a dry-eye therapy, was tested against a multivitamin as placebo.
Results indicated that the dry-eye supplement was significantly more effective than placebo in alleviating ocular discomfort in the Controlled Adverse Environment chamber at Ophthalmic Research Associates, in North Andover, Mass. 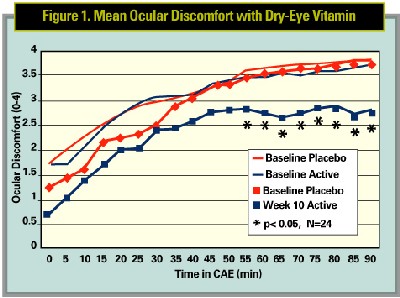 Researchers also analyzed this treatment in a subgroup of subjects presenting with eyelid edema. None of the lid edema in the placebo group had resolved, compared to 71 percent in the treatment group. This last finding would require further verification due to the small sample size, however the overall results regarding alleviation of ocular discomfort appear promising  (Pratt S, ARVO Abstract #2047, 2005).

One study, sponsored by a grant from Alcon, evaluated the conjunctival concentrations of ophthalmic solutions of the fourth-generation fluoroquinolones using a novel dual-biopsy technique. Biopsies were taken 20 minutes after instillation of each drop.

Clinicians found that moxifloxacin was present in the conjunctiva at significantly higher concentrations (avg.: 18 ug/g) than gatifloxacin (2.54 ug/g), ciprofloxacin (2.65 ug/g), ofloxacin (1.26 ug/g), or levofloxacin (2.34 ug/g). Researchers hypothesized that this difference may result from the bipolar, biphasic nature of the moxifloxacin molecule, which differs structurally from the other fourth-generation fluoroquinolones (Wagner R, ARVO Abstract #4888, 2005).

A study from the Wilmer Eye Institute also analyzed the ocular penetration of fourth-generation fluoroquinolones, but focused on measuring concentrations that permeated to the aqueous humor after perioperative treatment with gatifloxacin or moxifloxacin. Researchers took samples at the time of incision during cataract surgery. Results were consistent with those of the conjunctival study, with higher moxifloxacin concentrations in the aqueous (1.80 ug/ml) than gatifloxacin (0.48 ug/ml) (Kim D, ARVO Abstract #4890, 2005).

The 2005 ARVO conference presented attendees with reams of research, enough to satisfy anyone's  area of interest. As the conference grows and research continues to become more creative, there is more to learn each year.

Thoughts on Healing the Wounded Cornea

ARVO Comes to the City of Magic

ARVO Goes to the Emerald City