In late September the Uni­versity of Tennessee Health Science Center celebrated the grand opening of the second phase of the Hamilton Eye Institute, the only university eye center providing an advanced level of vision care within a 200-mile radius of Memphis.

With this addition of the pediatric and adult patient-care clinics and new educational facilities, the In­stitute now offers patient care, re­search and teaching resources in one location to serve the Memphis re­gion. The new facility has more than 60,000 square feet devoted to laboratory facilities, examination rooms, educational and academic facilities, and administrative offices.

Included in the clinical space is the Glaucoma Center, a general adult eye-care clinic, subspecialty care clinics, a pediatric eye clinic, a wet lab for surgical instruction, and facilities for telemedicine. Medical libraries and resource centers for both physicians and patients are also included. 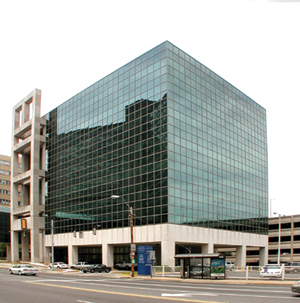 The Institute will also house a sur­gery center dedicated to ophthalmology, scheduled to open in early 2006. Last year, the Institute celebrated com­pletion of the Center for Vision Re­search with 15,000 square feet of research space designed to bring together researchers from across the UT campus in a collaborative environment.

Barrett G. Haik, MD, UT Ham­ilton Pro­­fessor and chair of the De­part­ment of Ophthalmology, said, "I am overwhelmed just thinking of how much has been accomplished here in a short time. Not only has Dr. Ralph Hamilton"s vision of a comprehensive facility with patient care, research and teaching in one place come to fruition, but also we now have true, state-of-the art facilities to provide care for individuals from all walks of life. Thanks to the technologies available, our telehealth capabilities allow us to provide care literally to anyplace in the world, which will aid in our current work with doctors in Central America."

"The most amazing part," Dr. Haik said, "is that all of this construction has been accomplished through private giving. The university is especially grateful to Baptist Memorial Health Care, which donated the building and helped make all of this possible."

Stephen C. Reynolds, president and CEO of Baptist Memorial Health Care, commented, "We are so pleased that under the capable leadership of Dr. Haik, our not-for-profit mission of preaching, teaching and healing lives on through the care provided on this campus. It was important that our gift enabled the Memphis medical community to ex­pand and be used for promoting ex­cel­lence in health care. Certainly, the Hamilton Eye In­stitute epitomizes this."


Closing in on RP Genetic Testing

Researchers at the Univer­sity of Michigan"s Kellogg Eye Cen­ter report the development of a rapid genetic testing for retinitis pigmentosa. The screening technique, based on a microchip array, has proven to be reliable and cost-effective, they report in the September issue of In­ves­tigative Oph­thal­mo­lo­gy & Visual Science.

The sequencing array is the first technology to screen simultaneously for mutations in multiple genes on a single platform. "For diseases that are associated with multiple genes, like RP, we now have a new and faster method for identifying the underlying genetic basis," says lead author and Kellogg scientist Radha Ayyagari, PhD. "This is also useful in analyzing complex patterns of inheritance and for understanding how causative genes might interact with each other."

It is nearly impossible to identify which form of RP a patient has through a clinical examination alone, says John R. Heckenlively, MD, a specialist in inherited eye disease who also participated in the study. "Identifying the precise genetic mu­tation responsible for an individual"s disease will allow us to provide a precise diagnosis, and this knowledge will also allow us to apply genetic therapies as they are developed."

Some clues to treatments are be­ginning to emerge in animal models, and scientists expect future therapies to be very specific to the type of RP. "Perhaps one patient will benefit from dramatically limiting exposure to sun or artificial light, and another will use certain vitamins or supplements to stop progression of the disease," says Dr. Heckenlively. "Ob­taining a molecular diagnosis is going to be very important in helping to guide gene-based treatments for pa­tients in the coming years," he concludes.

Dr. Ayyagari"s study involved 70 individuals with a clinical diagnosis of the autosomal recessive form of RP (arRP). Thirty-five had not been previously screened, and 35 others with known genetic mutations were screened to validate the results. The arRP-I chip contained sequences, or genetic codes, of 11 genes that carry approximately 180 mutations associated with early-onset retinal degenerations. To date more than 30 genes have been identified for various forms of RP. While the size of the chip currently limits the ability to array all known RP genes, larger platforms are likely to be available soon.

The arRP-I chips designed by the Kellogg research team produced 97.6 percent of the sequence analyzed with greater than 99-percent accuracy and reproducibility. The material cost of the arRP-I chip was 23-percent less than current se­quen­cing methods. That figure does not take into account the substantial savings in time and labor realized by analyzing multiple genes at once. These chips can detect both previously known and novel mu­tations.

The author acknowledge that the failure rate for SLT in their series was much higher than prior SLT studies. Possible explanations: The average pre-SLT IOP in their patients was 17.6 mmHg, which is much lower than those in other studies, in which the preoperative IOPs ranged from 22.5 to 26.6 mmHg. They note, too, a trend toward higher success with higher IOPs. Also, because the study took place at tertiary referral center, many patients have advanced glaucomatous damage necessitating lower target IOPs as determined by each treating physician.

The introduction of new classes of antiglaucoma agents may also be a confounding factor. In this our study, many patients were on a larger number of medications, which may have contributed to the high failure rate, although this was not statistically significant. Although prostaglandin use was not a significant factor in this study, there was a trend toward in­creasing failure rates for those eyes on prostaglandins.

The group notes the retrospective nature of the study as a major weakness, along with the number of surgeons, each with a different approach toward pre- and post-laser medications. They call for further prospective studies to clarify the efficacy of SLT and to assess whether specific medications, particularly pro­sta­glan­dins, can affect clinical outcomes.

A brief report in the American Jour­­nal of Ophthalmology evaluated SLT as a replacement for medical the­rapy in controlled open-angle glau­­coma.2 The prospective, non-randomized, interventional clinical trial included 66 eyes of 66 patients with medically controlled POAG or exfoliation glaucoma, and no history of glau­coma surgery. SLT was performed inferiorly in 66 eyes of 66 patients with medically controlled primary open-angle glaucoma (OAG) or exfoliation glaucoma, and no history of glaucoma surgery. The primary outcome was number of medications at six and 12 months while maintaining a predetermined target IOP. The mean of the differences in medications from baseline was 2.0 (range, 1.8 to 2.3) at six months, and 1.5 (1.27 to1.73) at 12 months. The group mean of medications was 2.8 ¡À1.1 at baseline, 0.7 ¡À 0.9 at six months, and 1.5 ¡À0.9 at 12 months. Reduction in medications was attained in 64 of 66 eyes (97 percent) at six months, and 52 of 60 (87 percent) at 12 months. SLT en­abled a reduction in medicine in con­trolled OAG over 12 months.

Although they call the link between age-related macular de­generation and smoking ¡°as robust as that between smoking and lung cancer,¡± a British group says that many smokers are still unaware that their habit could cost them their sight.

AMD Alliance UK and the Royal Na­tional Institute of the Blind are calling for specific warnings on cigarette packets. They would also like a government-funded awareness campaign on the dangers of smoking, and a complete ban on smoking in all en­closed public places across the UK.

Yet a report by AMD Alliance UK reveals that only 7 percent of people know that AMD affects the eyes, based on a survey of 1,023 UK adults.

Seven out of 10 smokers would either stop smoking permanently (41 percent) or cut down (28 percent) if they thought it could harm their eyesight, according to the group. The British Medical Association said it supported the call for AMD warnings on cigarette packs.

Study: Differences in Stability Between Tecnis and Acrysof