Many people likely remember being kept home by parents or sent home by teachers upon developing "pink eye." Conjunctivitis comes in several varieties, and can be caused by many different pathogens, as well as have several degrees of severity. In this article, we'll provide insights on diagnosing the various types of conjunctivitis, with a focus on viral disease.

Viral conjunctivitis is frequently associated with upper respiratory infections. Adenoviruses are the most common offenders, while herpes viruses are the most problematic. Treatment can be in the form of anti-viral medications, although most cases are self-limiting and resolve within two weeks.1 Staphylococcus and streptococcus are common instigators of bacterial conjunctivitis. With or without antibiotics, the eye usually resumes its natural whiteness in a week.2 The third type of conjunctivitis is allergic, and persistent itching in the presence of pollen, animal dander, dust, etc. distinguishes it from other forms of conjunctivitis. There is no cure for this over-reactive immune response, although topical antihistamine/mast-cell stabilizers can ease symptoms.3

With the exception of the allergic variety, conjunctivitis is highly contagious. Furthermore, viral conjunctivitis can be an indicator of a more serious condition, and if left untreated may lead to loss of vision.4 Unfortunately, the signs and symptoms of all three forms of conjunctivitis often overlap.

Differential diagnosis of conjunctivitis largely relies on clinical signs and symptoms. Medical and personal histories are also important. Allergic conjunctivitis is characterized by itching, chemosis, redness, tearing and eyelid swelling in both eyes. Corneal scrapings and skin prick tests can help to confirm the diagnosis. The patient's personal and clinical history is generally enough to differentiate the allergic type from bacterial or viral conjunctivitis; however, the differentiation between the latter two can be tricky.

Unfortunately, the immediate reaction of many doctors when a patient presents with pink eye is to prescribe antibiotics—a route that not only increases bacterial resistance to the drugs, but will not be effective if the infection is viral. Antibiotics also offer questionable effectiveness at speeding recovery from bacterial infections; one study found no significant difference in children's recovery time or adverse events between treatment and placebo groups.6 Furthermore, a systematic literature search of the signs and symptoms of conjunctivitis when compared to culture results suggested an absence of consistent, definitive diagnoses.7 Considering that the condition is self-limiting and symptoms persist for less than a week, antibiotics don't seem necessary. However, there are exceptions: trachoma (chlamydial conjunctivitis) is contagious and is spread through contact with mucosal secretions. It's a form of chronic follicular conjunctivitis, and symptomatic conjunctival scarring and trichiasis often result in corneal ulceration and opacities. The World Health Organization estimates that trachoma causes some 6 million cases of blindness yearly, although the disease has been eliminated in the . Oral antibiotics are effective, though there are concerns about bacterial resistance.8

Viral conjunctivitis, as opposed to bacterial, has a longer duration, rendering the hyperemia, chemosis and tearing less bearable to the patient. In addition, viral conjunctivitis has a tendency toward more serious symptoms, making antiviral treatment desirable. DNA viruses from the family adenoviridae are the most common cause of viral conjunctivitis.

The corneal involvement in adenoviral keratoconjunctivitis is unique within the realm of viral conjunctivitis. Corneal subepithelial opacities often develop about 10 days after symptom onset, and they can impair vision for months to years.9 Adenoviral keratoconjunctivitis currently has no specifically indicated antiviral medication; though cidofovir seems to be effective, it causes severe local toxicity in the high doses required to control the infection.10 Pharyngoconjunctival fever (PCF) is also associated with various adenoviruses; fever, pharyngitis and acute follicular conjunctivitis are its main symptoms. It generally clears within a few weeks. Nonspecific follicular conjunctivitis, also caused by an adenovirus, causes even less severe symptoms, although it may leave the eye open to more serious infections.1 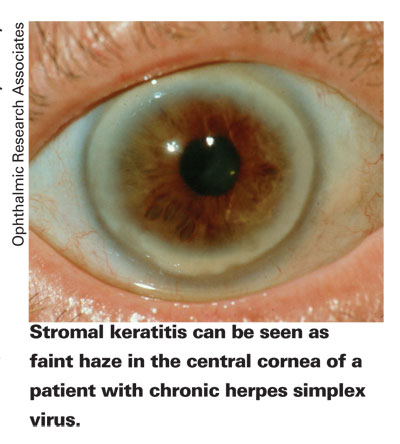 Herpes virus, particularly HSV1, is the most problematic cause of viral conjunctivitis. HSV2, the primary cause of genital herpes, is seldom seen in the eye. Although the initial infection of herpes simplex keratitis is often mild, the ocular symptoms, like the systemic disease, are recurrent, involving latent periods and outbreaks throughout the patient's lifetime. Such symptoms develop in less than 1 percent of general herpes cases.11

Corneal scarring, thinning and neovascularization result from uncontrolled recurrent HSK, eventually resulting in vision loss. The patient will also experience decreased corneal sensation. The virus lies dormant in the trigeminal ganglion, and head trauma may be a reason for the recurrence of symptoms (along with stress, fever, UV light, menstrual cycles and use of immunosuppressants). Topical acyclovir, valacyclovir and famcyclovir are effective at controlling symptoms, especially when combined with a steroid. Oral acyclovir is very effective at preventing recurrences of HSK. Unfortunately, corneal transplant doesn't prevent recurrence of the disease without the concurrent use of topical and systemic antivirals.4 Like the general systemic herpes infection, it's manageable but incurable.

The mode of transmission of viral conjunctivitis is largely dependent on the type of virus. Transmission of adenovirus is easy: Anything that has been in contact with the eye can transmit the virus, and since the virus is generally associated with an upper respiratory infection, it becomes airborne with sneezing and coughing. The entry point is therefore not only the eyes, but also the nose and mouth.12,13 Ocular herpes is commonly transmitted from other parts of a herpes-infected body, particularly lips with open sores, and from contacts after wetting them with saliva.4 Viral conjunctivitis can also be transmitted in pools with inadequate chlorine.1

Though it's rare in immunocompetent individuals, vaccines can result in ocular complications that can include conjunctivitis. For example, smallpox vaccinations, though currently uncommon due to the disease's eradication, result in ocular vaccinia in about one per 40,000 vaccinations.14 Aside from occurring in those with compromised immune systems, blepharitis, conjunctivitis and keratitis can occur from rubbing the vaccination site and then rubbing the eye. Symptoms often resemble ocular herpes, but a thorough patient history and laboratory testing can pinpoint the cause. Treatment consists of topical vidarabine or trifluridine, which limit the duration and severity of the outbreak.

Acute hemorrhagic conjunctivitis is another highly contagious ocular disease whose primary symptom is pink eye. Outbreaks have been reported worldwide.15-19 It's also characterized by rapid onset of ocular pain, tearing, foreign body sensation and photophobia. AHC is primarily caused by the RNA virus coxsackie A24, but enterovirus 70 can cause not only the conjunctivitis but also radiculomyelitis, which involves variable leg weakness, loss of bladder control and saddle anesthesia. The coxsackie-caused version is normally benign and clears up in seven days. The enterovirus version is rare, and the polio-like symptoms only manifest in one in every 10,000 patients. No cure is available for either form of AHC,20 although symptoms usually disappear in two weeks.16

There may be a redeeming quality to all these as-yet untreatable forms of viral conjunctivitis. The hygiene hypothesis, often used to explain the rising prevalence of allergies, holds that today's children grow up in environments that are so hygienic that their immune systems never mature. The balance of the infantile immune system is believed to be towards the Th2-specific response. However, exposure to pathogens and allergens early in life turns on the Th1 non-specific response, thereby building immunity to pathogens and to harmless allergens.

A literature search for viral conjunctivitis turned up a clinical case involving a 9-year-old boy with severe vernal keratoconjunctivitis. Two years after he was diagnosed with VKC, he presented with viral keratoconjunctivitis with subepithelial corneal infiltrates. After six weeks with symptomatic treatment, he experienced a complete recovery. The fascinating aspect is that, in the five year follow-up period after the viral infection, he had no symptoms of VKC. The giant papillae and a mild subepithelial fibrosis that had characterized his VKC diminished.21 This is by no means meant to encourage parents to expose their children to pink-eye to cure their allergies, but it does give support to letting self-limiting and harmless infections run their course. When the clinician suspects more serious forms of viral conjunctivitis, determining the specific pathogen (through immunoassays, polymerase chain reaction and tissue culture) is recommended.

Many viral manifestations besides conjunctivitis exist. Any sort of an infection, be it viral, bacterial or fungal, can be serious in immunocompromised individuals (such as HIV/AIDS patients), as well as in the very young and the very old. The most serious symptoms of viral diseases of the eye are generally seen in such individuals.

Children and young adults who were once infected with measles rarely have any lingering complications, but one in 100,000 patients develop subacute sclerosing panencephalitis. It is a neurodegenerative disease that leads to death in 95 percent of cases within three years. Remission occurs in the remaining 5 percent. Although the initially noticed symptoms are usually behavioral changes (e.g. irritability, loss of learning ability), ocular malfunctions occur in about half of the cases and precede neurological symptoms by a few weeks or months.22,23 Some suspect that early detection and treatment, before the onset of neurological symptoms, can prevent the full manifestation of the disease. Unfortunately, the initial symptoms of subacute sclerosing panencephalitis vary and can easily be mistaken for a genetic neurological disorder. High levels of measles IgG in cerebral spinal fluid in the presence of macular retinitis, papilledema, chorioretinitis, optic nerve pallor or several other visual disorders is cause for alarm. Isoprinosine and intramuscular beta-interferon therapy has been suggested as a treatment.24 In addition, the measles infection itself can occasionally show ocular symptoms when Koplik's spots appear on the conjunctiva.

Cytomegalovirus and varicella zoster virus are additional herpes viruses that can be problematic. CMV has a knack for resulting in corneal endotheliitis, uveitis25 and retinitis.26 Varicella zoster can quickly cause acute retinal necrosis.27 Again, these conditions are unusual in immunocompetent individuals, but occur more frequently in those afflicted with HIV/AIDS or who have otherwise suppressed immune systems.25,26

Many other viral diseases, especially those with a neurological route of attack (including ,28 and even rabies29), can present with ocular symptoms. Although such complications are rare, it's still important to recognize that the cause of a given condition may not be the most common. Patient histories and careful, yet prompt, diagnosis is critical to effectively treating ocular symptoms, and possibly saving the patient's life. 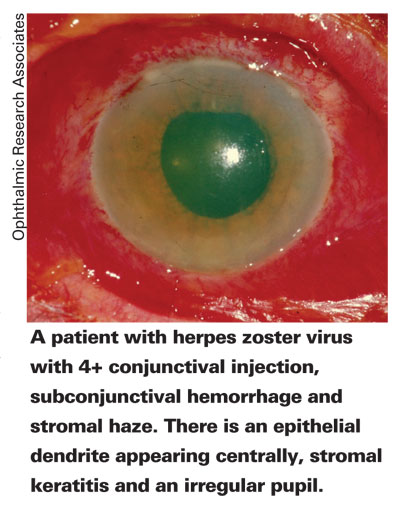 Ocular aberrations can be caused by many different agents that seldom lend the condition to easy diagnosis. Some of the viruses that cause ocular disease are highly contagious yet relatively harmless, while others are non- or minimally contagious but may be indicative of a more serious illness. However, the severity of the condition must be weighed against the benefits of medicating. The issues concerned with overuse of antibiotics are well known, and there is mounting evidence that suggests that overuse of antivirals may encourage viral mutation, resulting in resistance to the medications.30 Accurate and rapid differential diagnosis and the use of appropriate treatments for ocular diseases is vital.

10. Hillenkamp J, Reinhard T, Ross RS, et al. The effects of cidofovir 1% with and without cyclosporin A 1% as a topical treatment of acute adenoviral keratoconjunctivitis. Ophthalmology 2002;109:5:845-850.

24. Serdaroglu A, Gücüyener K, Durson I, Aydin A, Okuyaz Ç. Macular retinitis as a first sign of subacute sclerosing panencephalitis: The importance of early diagnosis. Ocular Immunology and Infiltration 2005;13:405-410.

26. Kempen JH, Martin BK, Wu AW, Barron B, Thorne JE, Jabs DA. The effect of cytomegalovirus retinitis on the quality of life of patients with antiretroviral therapy. of Ophthalmology 2003;110:5:987.

A Street-Level Look at Urban Allergy