With minor adjustments and a few significant exceptions, previously reported techniques for the management of dislocated intraocular lenses, including repositioning with or without sceral suture fixation, may be applied effectively to many styles of foldable IOLs, according to a Florida study. 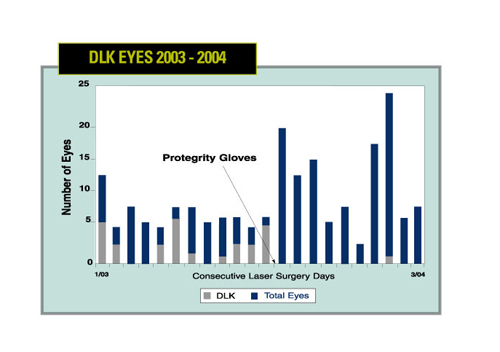 Researchers in Oregon de­termined that silicone oil contamination of sur­gical gloves is a significant risk factor for the development of epidemic diffuse lamellar keratitis.

The retrospective study analyzed an epidemic of diffuse lamellar keratitis in a single surgical center over a three-year period from January 2000 to September 2003. During that time the center noted an increased incidence of epidemic DLK that was unresponsive to changes in instrumentation or technique. Attempts to eliminate the epidemic included switching from detergent instrument cleaners to enzymatic cleaners, and discontinuation of Betadine preps. Despite these modifications, there was no appreciable or dramatic change in the occurrence of DLK.

After becoming aware of the possible association of surgical glove contamination as an etiology of DLK in September 2003, altering the brand of surgical gloves used during surgery resulted in a cessation of DLK. Optical microscopy, scanning electron micro­scopy-energy dispersive spectroscopy, and Fourier transform infrared spectroscopy were performed on both brands of surgical gloves to allow for comparisons and determine possible surface con­taminants responsible for the DLK outbreaks. The analysis of both glove brands revealed extensive silicone oil contamination on the internal and external surfaces of the DLK-as­sociated gloves and insignificant amounts of silicone oil on the external sur­face of the DLK-free gloves. As a re­sult of these findings, definitive animal studies are planned for the future.

Intravitreal triamcino­lone may be useful in treating cystoid macular edema due to branch retinal vein occlusion as either a primary or supplemental treatment modality, according to researchers in St. Louis.

A computerized review of the medical records was performed to identify patients with a primary diagnosis of branch retinal vein occlusion, with no prior laser therapy, who had been treated with IVT. The medical records of a total of six eyes of six patients (four females, two males) ranging in age from 53 years to 87 years (mean, 66 years) were reviewed for the study. The time between BRVO and treatment with IVT ranged from two months to 4.7 months. Pretreatment visual acuity ranged from 20/40 to 6/200. The length of follow-up ranged from 107 days to 175 days. Final visual acuity ranged from 20/40 to 3/200.

Three of the six eyes demonstrated improvement in vision. The three pa­tients who did not show improvement were given a second injection. At the final follow-up visit all six eyes demonstrated improved vision from baseline. Five of six (83.3 percent) eyes showed an improvement of >2 lines of vision; one patient had a postop rise in intraocular pressure and required a trabeculectomy. With IVT offering potential treatment of CME due to BRVO, the study suggests that a randomized trial to clarify this role is appropriate.

After reviewing case notes retrospectively from 1,000 consecutive LASIK procedures performed by one surgeon between January 2000 and January 2004 at Moorfields Eye Hospital, London, researchers concluded that the risk of visual loss is significantly reduced in contemporary LASIK when compared with premillennial results.

Travoprost Combo for POAG Or OHT

A fixed combination of travo­prost/timolol appears to produce marked reduction of intraocular pre­s­sure in a once-daily dosing regimen, re­searchers concluded based on the results of a multicenter study.

The prospective, randomized, double-masked, parallel group, active-controlled clinical trial included adult pa­tients (n=403) of either gender with open-angle glaucoma or ocular hypertension in at least one eye. To qualify for the trial, the patient's IOP had to be between 22 and 36 mmHg in the same eye at two consecutive eligibility visits.