No significant relationship between higher intraocular pressure fluctuation and glaucoma progression exists, say researchers in and .

Two hundred fifty-five (129 treated and 126 control) patients with newly detected, previously untreated glaucoma, including primary open-angle glaucoma, normal-tension glaucoma and exfoliation glaucoma, were recruited from the Early Manifest Glaucoma Trial. Eligible patients were between 50 and 80 years of age with reproducible glaucomatous visual field loss in at least one eye, but no advanced visual field loss, that is, mean deviation values better than -16 decibels, visual acuity ≥0.5 (corresponding to 20/40), mean IOP less than 31 mmHg, or any IOP less than 35 mmHg.

Study visits, conducted every three months, included ophthalmologic examinations, IOP measurements, and standard automated perimetry, with fundus photography every six months. IOP values were included only until the time of progression in those eyes that showed such progression.

Individual mean follow-up IOP and IOP fluctuation, calculated as the standard deviation of IOP at applicable visits, were the variables of main interest. Cox regression with time-dependent variables was used to evaluate the association between IOP fluctuation and time to progression, both with and without IOP mean in the models. These analyses also controlled for other significant variables.

Glaucoma progression, as defined by a predetermined visual field criterion, worsening of the disc—assessed by an independent disc reading center—or both, was the main outcome measured. Median follow-up time was eight years (range, 0.1 to 11.1 years). Sixty-eight percent of the patients progressed. When considering mean follow-up IOP and IOP fluctuation in the same time-dependent model, mean IOP was a significant risk factor for progression. The hazard ratio (HR) was 1.1 (95 percent confidence interval [CI], 1.06 to 1.17; p<0.0001). Intraocular pressure fluctuation was not related to progression, with an HR of 1.00 (95 percent CI, 0.81 to 1.24; p=0.999).

The results conflict with earlier reports that showed IOP fluctuation was an independent factor in analyses. One reason the researchers give for the discrepancy is their analyses did not include postprogression IOP values, which would be biased toward larger fluctuations because of more intensive treatment. Because the conclusion is based on data from previously undiagnosed and untreated glaucoma patients found by a population screening, the researchers believe the conclusion is more applicable to a general glaucoma population, and not to highly selected subgroups.

In a study involving two groups of patients with age-related macular degeneration, those given zinc supplementation showed a decrease in cystine concentration, according to researchers in , and .

To determine the effects of zinc supplementation on plasma thiol metabolites and their redox status in patients with AMD, researchers obtained plasma samples from subjects (age 55 to 80) who had been enrolled in the Age-Related Eye Disease Study multicenter clinical trial. Participants were randomly assigned to one of four treatment groups: 1) antioxidants (vitamin C, 500 mg; vitamin E, 400 IU; and beta carotene, 15 mg); 2) zinc (80 mg zinc oxide, 2 mg cupric oxide); 3) antioxidants plus zinc or 4) placebo. Blood specimens were obtained at two time points, an average of 1.7 years and 6.7 years after enrollment. The blood was then analyzed for glutathione (GSH), oxidized glutathione (GSSG), cysteine (Cys) and cystine (CySS). 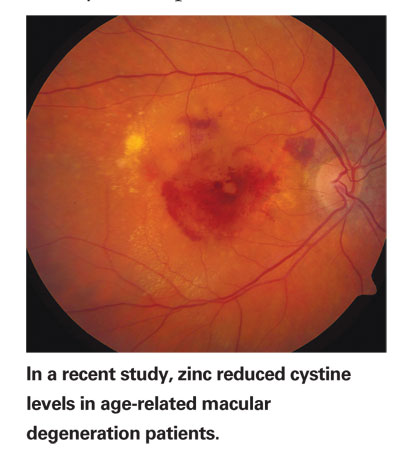 In order to achieve adequate statistical power, the four treatment groups were combined into two groups: a) zinc supplementation (combining groups 2 and 3) and b) no zinc (combining groups 1 and 4). Although zinc supplementation had no apparent effect on plasma thiol/disulfide redox status at the first blood draw, the group of patients receiving zinc at the second blood draw had significantly less CySS compared with those not receiving zinc (54.9 vs. 64.1 µM; p=0.01). There was a time-dependent oxidation of the plasma GHS pool and it was not affected by zinc supplementation.

According to the researchers, the study has several limitations. Because of the small sample size, they were unable to adjust the analyses for AMD status or supplementation compliance. Also, patients were combined into two groups, zinc supplementation versus none. A prior study showed that antioxidant vitamins inhibited the oxidation of thiol metabolites. The researchers suggest future studies with larger sample sizes to definitely prove the interaction between zinc supplementation and plasma thiol/disulfide redox status. Because increased CySS level is associated with aging, oxidative stress, and age-related diseases, the apparent prevention of increased CySS by zinc supplementation warrants additional investigation.

Seventy-one eyes of 71 patients with open-angle glaucoma and 56 eyes of 56 normal control subjects were enrolled in the study. Inclusion criteria were: age >40 years; no history of eye trauma; best-corrected visual acuity of 20/40 or better; spherical refractive error of 0 ±6D; astigmatism of 0 ±3 D; +1 or less nuclear sclerosis on a scale of 1 to 4, open angles on gonioscopy; and no history of systemic disease or medication that could influence visual function. Among patients with glaucoma, only those with early to moderate glaucoma (mean deviation of more than -8 decibels) were included.

Fifty eyes of 50 patients with glaucoma with confirmed SAP visual field abnormalities and 42 eyes from 42 normal control subjects were studied. Swedish Interactive Thresholding Algorithm standard 24-2 SAP and FDP visual fields were performed. The correlation of global indices and the number of defects on total deviation (TD) and pattern deviation (PD) were compared. The spatial concordance of FDP and SAP defect locations was determined.

In patients with glaucoma, significant correlations of mean deviation (MD) and pattern standard deviation (PSD) were found between SAP and FDP (p<0.001 for MD and p<0.001 for PSD), but not in the normal group. FDP had significantly greater defect scores than SAP on TD and PD plots in the glaucoma group (p=0.028 and p=0.01, respectively).

In comparison with SAP, sensitivity and specificity of FDP were 92 percent and 98 percent with glaucoma hemifield test criteria and 98 percent and 93 percent with PSD <5 percent criteria, respectively. Similarly high diagnostic precision was found with MD and PSD (at 95 percent specificity; MD and PSD sensitivity was 82 percent and 90 percent, respectively). The location of defects within 12 hemifield clusters found with FDP agreed moderately well with those detected in SAP (K= 0.48).

Larger and deeper defects detected with FDP suggest the possibility of earlier detection at higher specificity. One weakness to the study is that conformational visual field testing was not performed. The researchers recommend longitudinal studies to monitor visual field progression in early glaucoma.