The newest entrant in the U.S. femtosecond arena is the FS200 laser from Alcon/WaveLight and, like other products that enter markets with numerous competitors, the FS200 tries to differentiate itself from the other lasers by offering some unique features. Here’s a look at the device and the impressions of opthalmologists who have now had several months to work with it.


Cutting Flaps
Greensboro, N.C., surgeon Karl Stonecipher has used the FS200 for 350 cases so far, and says that the first thing a refractive surgeon will notice is that the laser handles the patient interface differently. “One of the variables in femtosecond laser platforms has always been the patient interface cone, and many of the variances in the standard deviation of flap thicknesses are often related to the patient interface,” he says. “To help reduce the interface’s effect on outcomes, the FS200 calibrates itself for each patient interface that’s used. So, in practice, you put in the patient interface and then there’s a 10-second calibration period during which the computer locks in the specific parameters of the interface and calibrates the beam to it.” Dr. Stonecipher thinks the extra calibration may make a difference in the accuracy of flap making. “Currently, in my practice, the FS200 is running at a standard deviation in flap thickness between 8 and 11 µm,” he says. The device uses a 200 kHz repetition rate, 1030-nm wavelength and a 5-µm spot. It makes a flap in around six seconds.

Another feature that may be different from what some surgeons are used to is a two-stage suction application. In the first vacuum step, the surgeon fixates the suction ring onto the patient’s eye but the applanation cone isn’t yet in contact with the eye. In the second stage, the surgeon connects the suction ring and the applanation cone, bringing the cone into contact with the eye. “Centering the ring is pretty straightforward,” explains Dr. Stonecipher. “The ring is a little smaller than those on some of the femtosecond systems we’ve used so it’s a little easier to use with smaller lid fissures. It must be docked correctly or it won’t work, but the docking step is straightforward also. You bring the patient interface straight down into the cone, and it latches on with suction when it’s applied.” 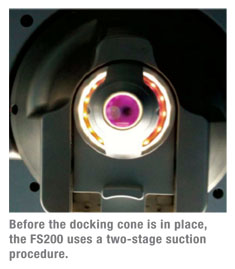 Dr. Stonecipher says one feature of the device that he’s appreciated is that it maintains the same beam diameter even if he recenters the device after the suction ring has been placed. “With some other platforms, if you put on the suction ring but don’t feel the flap is centered, you can move the laser to a new centration point, but this can decrease the diameter of the subsequent flap,” he explains. “So it might go from 9 mm down to 8.9, 8.8, 8.7 and finally to 8.6 mm. With this device, as you move the center of the beam, the diameter stays constant.”

In terms of flap architecture, the FS200 allows surgeons to create 70-degree or 110-degree inverted side cuts and to place the hinge wherever they feel it’s best for the excimer laser refractive treatment. “Many times, if I’ve got steep axis 90 or 180 astigmatism, I’ll move the hinge so the long axis of my excimer ablation profile isn’t hitting it. The other issue is with hyperopia. For that, we can do elliptical flaps and larger diameter flaps. The flaps are customizable in terms of their dimensions.”

To allow the release of the femtosecond energy as it strikes the cornea, the laser uses a canal. “The canal allows for the release of the energy that would otherwise cause an opaque bubble layer or other related complications,” Dr. Stonecipher says. “The canal is rectangular and connects the LASIK flap to the limbal architecture.”

Down the road, Dr. Stonecipher hopes U.S. surgeons will have access to the wireless connectivity enjoyed by FS200 surgeons outside of the United States. With it, a surgeon or his staff only need to enter a patient’s data once. They can then transfer it wirelessly to a WaveLight laser or an electronic medical records system, or from an medical records system to a wavefront analyzer and the laser. This data would include such information as the patient’s name, date of birth and refraction. “Wireless updating of the data would be helpful to have when you think of how many times your staff has to re-enter the same data now,” he says.


Corneal Transplants
The FS200 has also been approved for corneal transplant applications, and some surgeons have begun using it in that capacity as well. Sonia Yoo, MD, a cornea specialist at Bascom Palmer Eye Institute, has been using the system for anterior lamellar keratoplasties and Intacs implantation in keratoconus patients. “For Intacs, the laser creates one continuous circular channel for the two ring segments,” she explains. “The software of the FS200 allows for the creation of a small rectangular pocket tangential to the radial incision that makes it a little easier to introduce the front end of the Intacs segment,” she explains.

The system also allows for the construction of different shaped side cuts that have become popular in the world of femtosecond-assisted keratoplasty. “For patients with a healthy endothelium but scarred anterior stroma, such as someone with keratoconus, the surgeon might want to try to leave the healthy endothelium in place, and might go with donor tissue that’s mushroom shaped,” Dr. Yoo says. “This would leave more of their endothelium and maximize the surface area of the cornea that’s being replaced. By contrast, someone with pseudophakic bullous keratopathy has an endothelium that’s diseased, so you might make a top-hat-shaped transplant in that case. In theory, if you can help the cornea heal in a stronger manner faster with different shaped side cuts, then you can potentially rehabilitate the eye faster than you’d otherwise be able to. Ideally, someday we may be able to couple a femtosecond laser keratoplasty procedure with a bioadhesive or other method for welding the incision closed so we can use fewer sutures.”

Dr. Yoo says they’re still getting a feel for the parameters for DSEK with the femtosecond. “We still haven’t found the idea parameters to use in order to get good, smooth, deep lamellar cuts,” she explains. “It might be that the corneal tissue in the posterior stroma is the limiting factor because it’s less compact than the anterior corneal tissue, has more hydration and is in a different configuration in terms of the corneal lamellae and how they line up. So, for deep lamellar keratoplasty we’ve still been using a microkeratome to prepare the tissue. For deep anterior lamellar keratoplasty, we’re basically using a manual big bubble.”

Dr. Yoo hopes the laser will be usable for other corneal surgeries in the future, too. “We’ve been in the lab looking at the use of femtosecond lasers for other types of corneal surgery, such as cutting tissue for the placement of a keratoprosthesis,” she says. “I’m excited about the other surgical prospects in light of new biomaterials that are becoming available for the creation of different types of devices such as keratoprostheses and corneal inlays.”
Show more on: NEW TECHNOLOGY